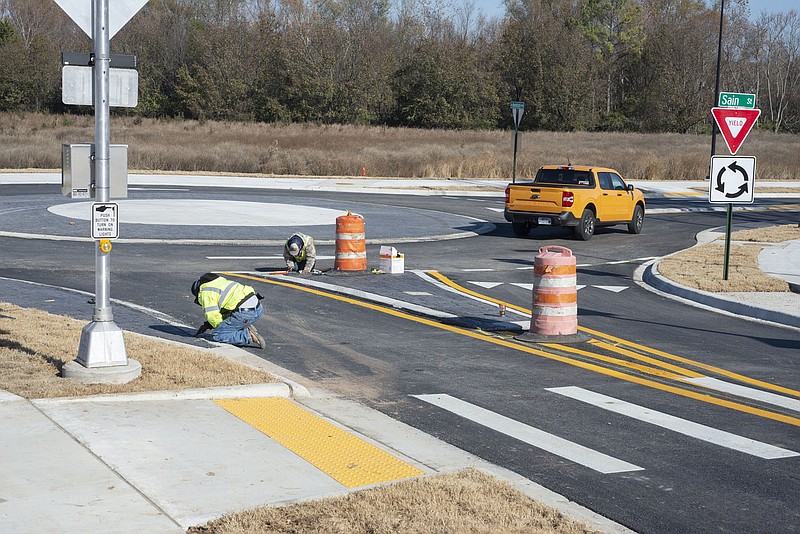 FAYETTEVILLE — The “extension” portion of the Sain Street project in Fayetteville is finished, but two more sections await completion.

The city recently opened an extension of Sain Street northeast to Vantage Drive to traffic. Construction began in March of last year.

The 2,400-foot-long extension includes a 320-foot-long bridge over Mud Creek. Cross-land Heavy Contractors of Columbus, Kan., and a local office in Lowell, submitted the lowest bid and were awarded a more than $4.3 million contract. The final construction cost was a little more than $5 million.

Federal aid paid for 80% of the project, with about $4 million in total aid and the city paying about $1 million. The city’s portion came from a transportation bond issue voters approved in 2019.

Public Works Director Chris Brown said the extension has been on the city’s plan for streets for many years. The idea is to provide an alternative east-west route that will help divert traffic from College Avenue and Joyce Boulevard, the city’s busiest intersection, he said.

As part of the extension, the city installed a roundabout where Sain Street formerly dead-ended east of Front Street. The roundabout will eventually link an extension of Hemlock Avenue south to Mill-sap Avenue and, to the east, provide access to an apartment complex in development from Lindsey Management.

That extension of Hemlock Avenue to Millsap Road and an overhaul of the intersection with College Avenue and Mill-sap Road represent the other two pieces left in the larger project. The city hopes to start construction on both projects at the same time, likely in early 2024, Brown said. Construction should wrap by the end of 2024 or early 2025, he said.

The city wants to add a second turn lane on Millsap Road for cars heading east to turn left onto North College Avenue. The right-turn lane to go south on College would remain, as would a single lane to stay on Millsap.

Cars heading west on Mill-sap would have their own left-turn lane to go south on College. The lanes on Millsap also would be realigned to match up both sides at the intersection.

“I think by making that east-west route more efficient, we can squeeze a little bit more green time out of the College Avenue north-south leg and make that traffic move a little better,” Brown said.