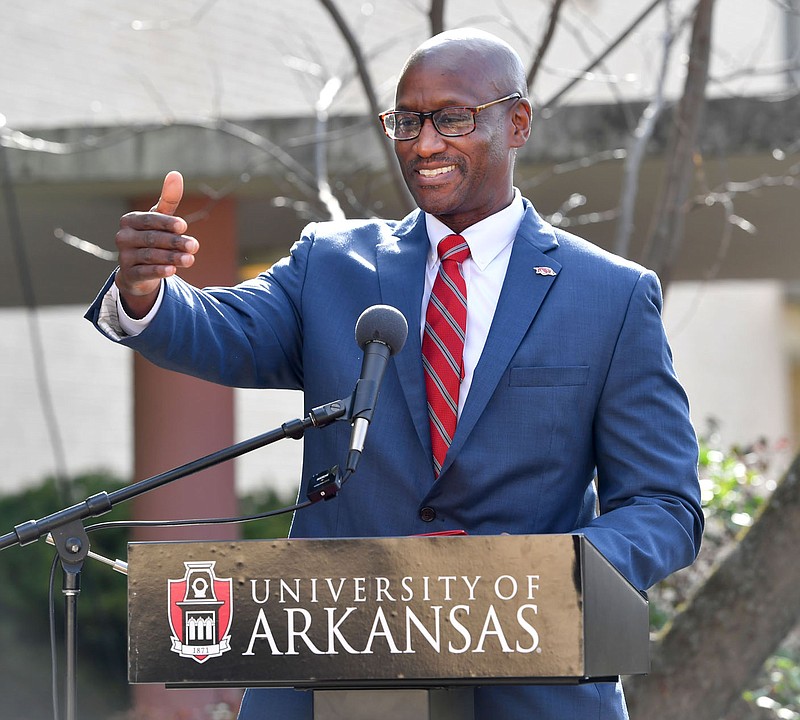 Charles Robinson, chancellor of the University of Arkansas, speaks Tuesday, Nov. 29, 2022, during a groundbreaking ceremony for a planned restoration and renovation of the Fine Arts Center on the university campus in Fayetteville. The building was designed by renowned architect Edward Durell Stone and built in 1951. The project is set to begin in January and be open in the fall of 2024. Visit nwaonline.com/photo for today's photo gallery. (NWA Democrat-Gazette/Andy Shupe)

FAYETTEVILLE -- When the University of Arkansas, Fayetteville's Fine Arts Center opened in 1951, it was "definitely cutting edge" as the first multidisciplinary academic arts building in the country, gaining instant acclaim due to its design by famed architect Edward Durell Stone.

More than 70 years later, the UA Fine Arts Center is undergoing a renovation that will remain true to Stone's original intent while restoring the edifice's place as a leading light for arts not only on campus, but in the community, said Jeannie Hulen, assistant dean of the J. William Fulbright College of Arts and Sciences.

The renovation "has been a long time coming, and we've been waiting for this day," Hulen, a professor of Art, said Tuesday at a groundbreaking ceremony. She called the restoration "another step forward as the university and Northwest Arkansas continue to grow as a nationally-recognized" area for the arts.

Listed on the National Register of Historic Places, the building is "beloved" by many alumni and community members, so it is paramount to "stay true to Stone's vision" while also updating it for the needs of contemporary -- and future -- students, said Andra Liwag, Fulbright College of Arts and Sciences senior director of communications. "We're very conscientious of that, and it'll be the best of both worlds: a historic building with modern amenities."

The renovation and restoration is critical not only to current students and staff, but alumni and community members, added Marty Maxwell Lane, director of the School of Art. "There's deep attachment for it in the community -- there's no town-campus divide. People love this building deeply."

When renovated, it'll be "a world-class environment where we can reinvent what's possible," said Christopher Schulte, assistant director of the School of Art. "It'll mean so much for generations of students."

Being housed on a campus located in one of the fastest-growing places in America, the School of Art is in a unique position because the arts have been a major factor in making Northwest Arkansas such an attractive destination, said Schulte.

Since the School of Art opened in 2017 with a $120 million gift from the Walton Family Charitable Support Foundation -- those funds are also being used for the Fine Arts Center's $38 million renovation -- the school has increased undergraduate enrollment by 50%, while graduate enrollment is up more than 100%.

Faculty has grown by 74% or from 35 to 61 professors who now educate nearly 600 students. The school includes multiple graduate programs, Schulte said, such as a master of arts in Art Education that is the only such program in the state -- and one of a paucity in the multi-state region -- which "fills a really critical need for art educators."

Jana Whatley, a member of the first cohort in the master of arts in Art Education, said she and her fellow students are deeply grateful for the support they receive, saying the renovation "is a big step forward."

The "degree of support we experience here is unmatched," said Schulte. The School of Art continues to develop more offerings, with a master of arts in Art History planned to roll out next year and the state's only doctoral program in Art Education at some point after that.

The restoration of the Fine Arts Center will begin in January 2023 and should be complete in time for the fall 2024 semester, according to the university. Architect firms Deborah Berke Partners, based in New York City, and Miller Boskus Lack, based in Fayetteville, have designed the restoration to preserve Stone's vision while transforming the building for today's needs.

The "transformative restoration" of the Fine Arts Center will provide classroom spaces "to meet a wide range of undergraduate and graduate student needs," Schulte said. It'll also allow for growth in "some of our community-facing programs," such as art education for youth.

Whatley is particularly excited about the impending changes to the library space, which will be "more wide open with more natural light," she said. That will foster more collaboration among students -- and even staff -- and be a "much healthier environment for deep reading and study."

Hulen is looking forward to the space between University Theatre and Concert Hall being reimagined as a public lobby and commons area, as well as updating the historic outdoor landscaping and "bringing back the floor-to-ceiling glass windows [Stone] was famous for."

The frames around historic glass windows on one side of the building were originally turquoise, but had been painted brown at some point, and they'll be turquoise again as part of this restoration, Lane said. While that may seem a small detail to some, it matters to Fayetteville natives and to many others, as "that was the thing mentioned most by senior faculty and alumni."

The School of Art is currently spread out in several buildings, but when classes start in January at the new Studio and Design Center in the new Windgate Art and Design District, on Martin Luther King Jr. Boulevard in the southern part of the city, and the Fine Arts Center, programming will be concentrated in those two buildings, Lane said. It's "rare to have this kind of support for the arts at a state institution, and it's pretty monumental for the School of Art, but also significant to the larger campus."

"The arts are very much alive on this campus," and this renovation is the latest example, said Chancellor Charles Robinson. "[We're] committed to enhancing the human experience and educating future generations."