‘River out of nowhere’ recounted as survivors tell of Ian 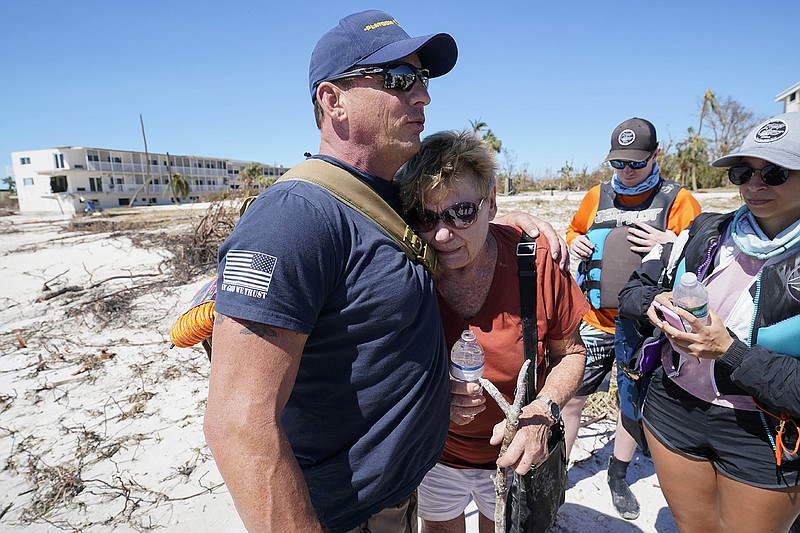 Many described being caught off guard -- settling in as Ian approached with supplies of nonperishable food, water and generators on hand, only to find out that their homes were no match for the storm.

Kathy Sharp believed she would be safe at Thunderbird Park -- a mobile home community for retirees dotted with palm trees two miles from the Gulf of Mexico.

For days, forecasters had indicated Hurricane Ian was heading toward Tampa. But as the storm shifted and tore through Fort Myers, Sharp looked out a window and noticed pieces of her neighbor's roof flying into the air.

Not long after, her own home started to break apart, the fierce wind casting aluminum paneling into the swirl of airborne debris.

Then the water hit.

"It was just like a river out of nowhere," said Sharp, 74, describing the apocalyptic storm surge. "There was nothing there, and then all of a sudden there was like a foot of water in the house."

Frightened, Sharp and her husband, Lonny Henry, frantically called 911. Even before a dispatcher picked up, however, the couple knew no one would be coming to their rescue.

One elderly woman recounted how the water rose so high she had just six inches of space to breathe. A couple described looking out a window and seeing several large fish swimming by.

In communities near Fort Myers Beach, the water was so forceful it collapsed buildings, tumbled concrete walls and pushed sailboats and dumpsters hundreds of feet.

At one gas station, a large boat ended up parked next to a gas pump, as if ready to fill up. Scores were still waiting to be rescued from trailer parks, residential subdivisions and luxury waterfront apartment complexes in a part of the state that is home to a large senior citizen population.

Everett Bailey, 56, said he was asleep on a couch and woke up to see water starting to spill into his one-story home. He immediately waded through the flood to get to his car.

"The water was in the car, too," he said, "but my car started and I drove it to the church."

He returned home when the water receded to find his waterlogged belongings ruined.

A few doors away, Anne Dalton, 70, considers herself lucky that the flood stopped inches short from reaching the interior of the house her family has owned since the 1980s. But as she watched the murky water swirl around her house Thursday, Dalton said she nonetheless experienced the scariest night of her life.

"The weird thing is it was like a river of currents, and it was not calm water at all," she said. "It was pulsating, and it was pulsating under the water, too. It was very frightening, because we couldn't go anywhere. We would have just fallen down."

At one point, Dalton's husband, Oliver Martin, looked outside and saw a school of fish.

In another subdivision off McGregor Boulevard -- a main transit route from Fort Myers to Fort Myers Beach -- Laurent Boce, 58, estimated that Ian brought a 13-foot wave toward his home, which sits at about 11 feet above sea level.

"It was just like five, six hours of pure madness," said Boce, who was essentially trapped in his subdivision Thursday as parts of the street remained under two feet of water. "I was able to sit in a chair and just watch the water and debris come in, in, in."

As she watched floodwaters carry debris down her street, the wind began shaking her door.

"I was holding my front door because of the wind, and I didn't know what else to do," she said. "I thought the ocean was going to come through."

In downtown Fort Myers, the Caloosahatchee River spilled over, inundating several blocks inland. In neighborhoods closer to the Gulf of Mexico, the water rose so high against structures -- especially trailers -- it knocked over interior walls, said Myke Hastings of Gulf Search and Rescue, a Texas-based team, as he attempted to check up on stranded residents in one trailer park.

He recalled rescuing a 77-year-old woman in a lifejacket who said she had just six inches of space between the floodwaters and her ceiling.

"She was trapped," Hastings said. "We had to dig her out. Everything had collapsed around her, and she couldn't get out of her trailer even though the water had receded."

About 25 miles to the north, in Punta Gorda, the wind rattled residents at Creekside RV Park, who said Hurricane Ian's eye passed directly over them.

Deborah Clark, 57, and her husband have lived in their 40-foot trailer for the past two years while they build a house nearby.

About 8 a.m. Wednesday, Clark woke up as her trailer began shaking.

"My gut said, 'This is bad,'" said Clark, who had not the expected the winds to pick up so soon.

She rushed to the community's clubhouse, which she said was built to withstand a Category 5 hurricane. Within a few hours, 30 other residents were huddled inside. For the next six hours, they watched from windows as Hurricane Ian flipped over their trailers.

"It sounded like planes flying overhead," Clark said. "But you knew this wasn't planes. And then you could almost hear a whistling sound."

When the wind subsided, residents discovered that about 40 of the 50 recreational vehicles that had been parked at the site had been turned upside-down or destroyed. One was pushed into a pond.

"For most of the people, these are their homes," said Erik Clark, Deborah's husband. "Everything they own is in these campers."

The Clarks said they decided not to evacuate Punta Gorda ahead of the storm because it was initially forecast to make landfall near Tampa. When they realized Tuesday that the forecasts had changed, Erik Clark said he worried that roads would be cluttered with traffic.

Many said they won't hesitate to leave the next time a powerful hurricane rolls in.

As the floodwaters seeped into her home Wednesday, Sharp and her husband watched from a kitchen table and prayed while trying to stay as calm as possible.

"We were just sitting there in the water," she said, adding that "this storm made me a true believer" in the power of wind and water.

When they did peek out the window, the couple saw "roofs going by and insulation" floating down the street. At one point, a neighbor's washing machine was sucked out of a home. Another neighbor's 600-pound toolbox floated away.

"By midnight, it was pretty much done," Henry said. "When we got up this morning, we started ... cleaning up." 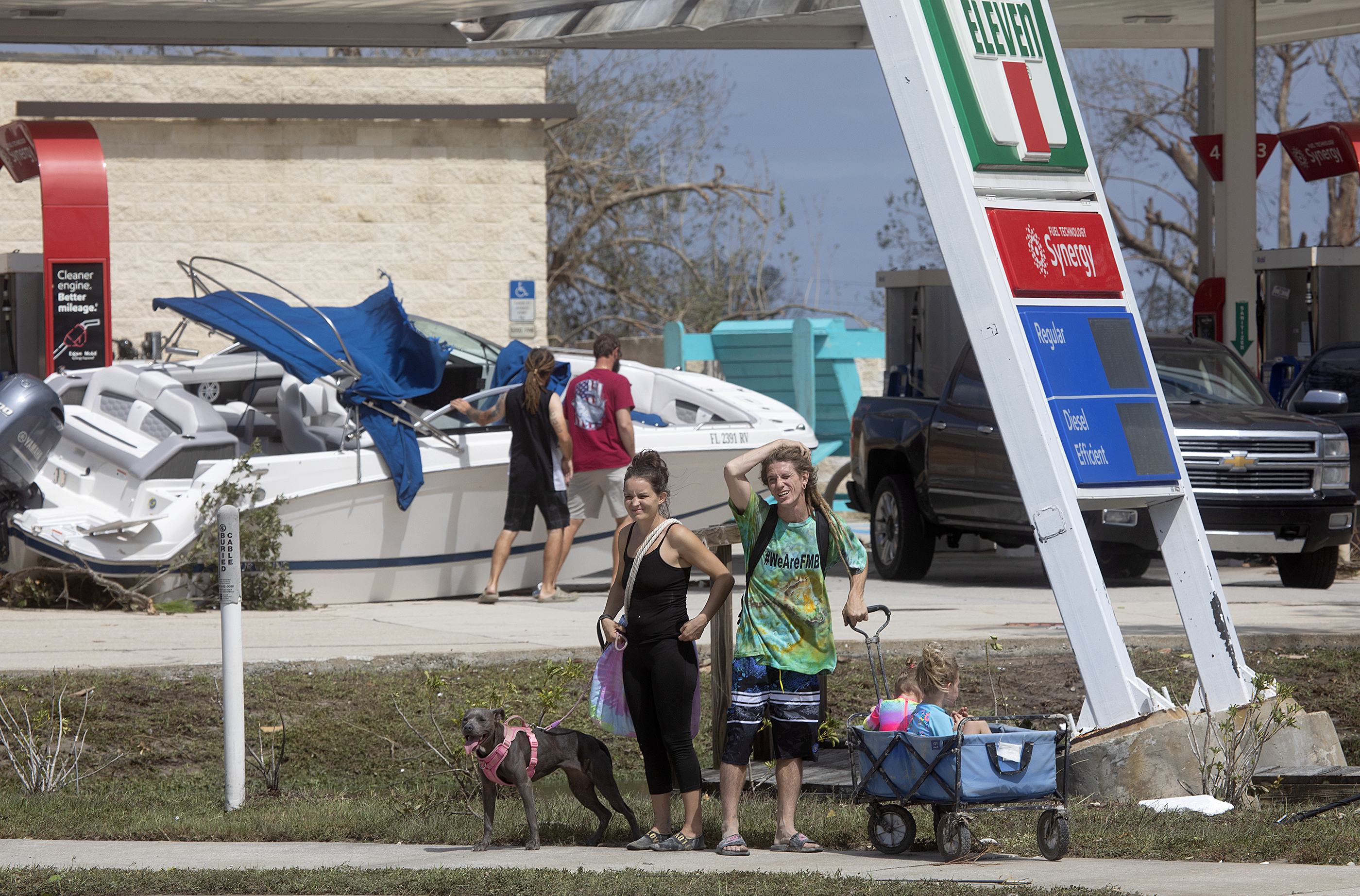 After surviving Hurricane Ian in Fort Myers Beach, Derek and Ciara Deshane seek water, food and shelter while walking with their daughters Spirit, 6, and Callie, 2, and dog Angel on Thursday, Sept. 29, 2022. "We lost everything," said Derek Deshane, who said his home and place of work were destroyed. MUST CREDIT: Photo for The Washington Post by Ted Richardson.

Print Headline: ‘River out of nowhere’ recounted as survivors tell of Ian