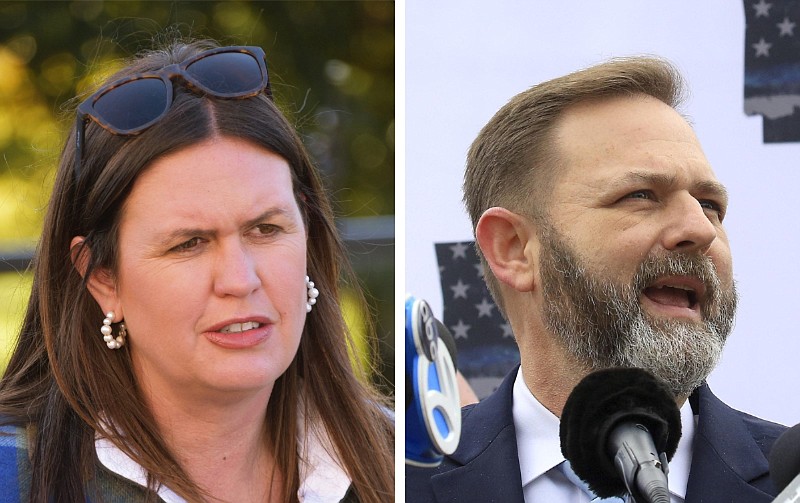 Sarah Huckabee Sanders and Cody Hiland are shown in this undated combination photo. Sanders, Arkansas' Republican gubernatorial nominee, has endorsed Hiland, a member of her campaign, to be the next chairman of the Arkansas Republican Party. Hiland is a former U.S. attorney who left his post as chief counsel at the Arkansas Department of Public Safety to work for Sanders' campaign. (Arkansas Democrat-Gazette file photos)

On Dec. 3, the Republicans' State Committee is scheduled to elect a party chairman for the next two years, said party Executive Director Sarah Jo Reynolds.

Jonelle Fulmer, who has served as the state GOP's chairman since December 2020, said late Friday afternoon in a written statement that it's time for new leadership at the helm of the party and she supports Sanders' nomination of Hiland to be the party chairman in December.

Sanders said Friday afternoon in a written statement that "Cody Hiland has proven himself as a highly respected, tough on crime U.S. Attorney and he has my full support to lead the Republican Party of Arkansas, elect conservatives, and make sure the radical left never gains a foothold in Arkansas."

Last month, Hiland started work for Sanders' gubernatorial campaign after he departed as chief counsel at the state Department of Public Safety, where he had worked since June 2021.

Republican U.S. Sen. Tom Cotton of Dardanelle also signaled his support for Hiland to be the chairman of the Republican Party of Arkansas.

"I've worked for many years with Cody Hiland, first as a state prosecutor and then as a federal prosecutor, a role for which I recommended him to President Trump," Cotton said Friday afternoon in a written statement. "Cody is a man of integrity and initiative. I commend Sarah Sanders for a fine choice to lead our state party into the future."

Hiland served as U.S. attorney for the Eastern District of Arkansas from 2017-2020 after being appointed to the position by President Donald J. Trump. He previously was the prosecuting attorney for the 20th Judicial District and Faulkner, Van Buren and Searcy counties. He also served as an aide to then-GOP Gov. Mike Huckabee, who is Sanders' father.

She said Hiland has the skill set and temperament "needed to effectively lead us in the next era of Republican government."

In December 2020, Fulmer was elected to succeed former state Sen. Doyle Webb of Benton, who had served as the party's chairman since December 2008.

She has said she started working on campaigns in 1995 for her Sunday school teacher Asa Hutchinson, who was running for Congress. Hutchinson, a former 3rd district congressman, has been governor since 2015, and his eight-term tenure as governor will end in early January.

Sanders, of Little Rock, is vying with Democratic nominee Chris Jones of Little Rock and Libertarian candidate Ricky Dale Harrington Jr. of Pine Bluff for a four-year term as governor.

A year ago, Grant Tennille of Little Rock was elected chairman of the Democratic Party of Arkansas, filling out the remainder of former chairman Michael John Gray's term. Gray is a former state representative from Augusta. Tennille said Democrats will elect a party chairman in December.

Tennille had been working as an unpaid adviser to Little Rock Mayor Frank Scott Jr. Tennille served a stint as the head of the Arkansas Economic Development Commission under then-Democratic Gov. Mike Beebe's administration, in which he had also served as the governor's deputy chief of staff. He also previously worked as an aide to Huckabee.