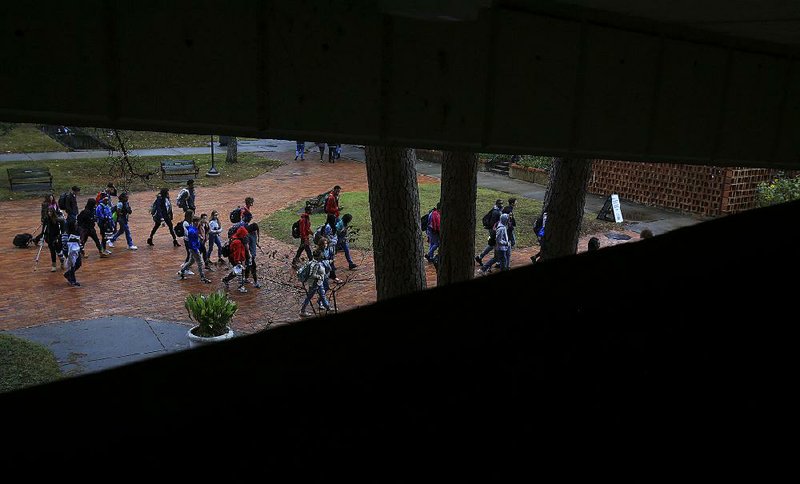 At a time when college enrollment is decreasing nationally and across the state, the fact that a handful of UA System institutions grew enrollment, while several others were essentially flat, "is remarkable," said Donald Bobbitt, president of the UA System.

Roughly one out of every four people in Arkansas age 25 or older have at least a bachelor's degree, which places Arkansas among the bottom five states in that category, according to the U.S. Census Bureau. Nationally, the percentage of people age 25 and older who had completed a bachelor's degree or higher is about 38%.

Enrollment and student credit hours are crucial to colleges and universities partly because of the revenue they bring in from tuition and mandatory fees, as well as from on-campus food services and housing.

UNIVERSITY OF ARKANSAS AT LITTLE ROCK

The University of Arkansas at Little Rock reported an enrollment decrease of nearly 3% compared with last year, although the number of first-time freshmen, transfers and graduate students all rose significantly.

UALR's total enrollment is 8,103, which is 2.7% lower than the same time last year, according to preliminary figures reported by the university Sept. 7. However, that figure outperformed the university's own enrollment projection by 3%.

The number of first-time freshmen is up an "unprecedented 29%," while transfer students are up 8% and graduate students are up 5%, according to Angie Faller, news director, communications and marketing at UALR. More students are also living on campus, with an "increase in housing occupancy by more than 11% over last year."

UALR "is experiencing its largest percent increase in first-time freshmen and transfer students in over a decade," Cody Decker, vice chancellor for student affairs and chief data officer, said in a statement from the university. For those incoming freshmen, the average high school GPA is 3.3, and the average ACT score is 22.4.

The rise in graduate students "follows a 45% increase in graduate applications and [a] 31% increase in admissions," according to Faller. The Department of Information Science saw the highest jump, with an increase of 86%, while enrollment also rose in history, computer science, art and design, and biology graduate programs.

"Graduate education continues to be a priority for many baccalaureate-prepared students due to the value that a graduate degree brings," Brian Berry, vice provost of research and dean of the graduate school, said in a statement from the university.

"This is particularly true in the fields of cybersecurity, information science and information quality as evidenced by their significant growth this year," Berry said. "Growth in these areas is critical for developing the workforce needed to meet the demands of our growing, knowledge-based economy here in Arkansas and across the region."

UNIVERSITY OF ARKANSAS AT PINE BLUFF

Total fall enrollment at the University of Arkansas at Pine Bluff is down 7% from last fall from 2,670 to 2,482.

"We are analyzing the data to determine where and why most of the decline occurred," according to Mary Hester-Clifton, director of communications, institutional advancement. "There is no singular reason for the decrease, [but] it appears that the pandemic and economic conditions are affecting our enrollment."

However, graduate enrollment is up 17% over last year, and the university has a six-year graduation rate of over 40% for the second-consecutive year, she added. "While we continue to focus on increasing enrollment, we are delighted that a higher percentage of our continuing students are completing their degrees."

UA-Fayetteville crossed the 30,000 mark for enrollment for the first time this fall and set a new record for enrollment at 30,936, up 8.3% from last year, said Suzanne McCray, vice provost for enrollment and dean of admissions. Enrollment has roughly doubled over the last quarter century, and "we've added 10,000 students since 2009."

The cumulative high school GPA of this fall's 7,099 degree-seeking incoming freshmen also set a new record at 3.77, she said. "We believe this will improve our retention and graduation rates, [because] these students are better prepared for college."

The Sam F. Walton School of Business has led the way in the enrollment uptick, as it is up 600 students -- a far larger increase than any other school -- this year, to 2,417 students, she said. UA-Fayetteville's freshmen class includes 2,835 Arkansans, as well as 2,555 Texans, 578 Missourians and 303 Kansans, as "we are the number one university" for Kansans and Missourians outside of their respective states.

Texas is a critical state for recruiting, because it continues to grow rapidly in population, while many other states -- including Arkansas -- will experience a notable drop-off in potential college students over the next decade due to the country's birth rate decline, interim Chancellor Charles Robinson said. Out-of-state students, in general, are crucial to the university, because they pay out-of-state tuition, "which allows us to keep costs low for Arkansans."

"Some out-of-state students pay a higher tuition than others based on whether or not they qualify for the New Arkansan Non-Resident Tuition Award" -- which offers scholarships based on academic merit, such as GPA -- "but even those who qualify still pay out-of-state tuition at a higher rate than any Arkansan," according to Mark Rushing, associate vice chancellor, university relations.

With 2,835 in-state students in this freshman class, the university saw an 8% increase in Arkansans this year, McCray said. At the university, 90% of scholarship dollars go to Arkansans, and 97% of Arkansans who apply for scholarships receive at least one.

The university is intent on continuing to recruit in state, she said. The RazorBug continues to tour the state; high school counselors will soon be able to recommend students to the university who might otherwise be overlooked and free application day will be expanded.

"Free application days are very popular, and some students count on those," she said. "We want to make sure no student who wants to apply is" prevented from doing so by lack of resources.

UNIVERSITY OF ARKANSAS AT MONTICELLO

Enrollment increased at the University of Arkansas, Monticello, from 2,673 last fall to 2,717 this year, and transfer student enrollment has grown 27% compared to the fall 2021 semester, from 131 to 166 students, according to the university. In addition, graduate student enrollment has hit a record high, growing 10%, from 409 to 451 students, according to the university. Additional graduate student growth is anticipated in the near future with a Master of Science in Nursing degree with an emphasis in public health, which will start in January and is currently accepting applicants.

"The increase in overall enrollment at UAM's three campuses highlights the success of our outreach efforts and confirms what we proudly know about our university: UAM is a model higher education institution, offering an affordable, comprehensive education, from technical certificates to graduate degrees," Chancellor Peggy Doss said in a statement. "While our numbers are not up in every enrollment area, we are excited to see continued growth in the coming academic year, as a result of new program offerings and partnerships."

PHILLIPS COMMUNITY COLLEGE OF THE UNIVERSITY OF ARKANSAS

Phillips Community College of the University of Arkansas reported a 1.5% increase in students this fall, adding 10 students to last fall's enrollment of 663.

Targeted recruitment for technical programs, such as CDL/truck driving, construction, HVAC, cosmetology, medical laboratory technology and phlebotomy, have all seen enrollment increases for the fall semester, and the college also enhanced its presence/marketing on social media, especially throughout the registration period, according to a press release from the school. "Through the use of Google analytic searches, we are able to evaluate our marketing and monitor our performance through data reports that have revealed that our website has experienced a lot of increased traffic."

A new full-tuition scholarship in behavioral health offered through the Arkansas Rural Health Partnership also aided in enrollment, according to the college. Another incentive is the college's free transportation service, which is available each semester to Helena-West Helena area students who live within a reasonable distance from campus.

UA GRANTHAM AND UNIVERSITY OF ARKANSAS FOR MEDICAL SCIENCES

At UA Grantham -- based in Little Rock and the UA System's only exclusively online institution -- eight-week terms start every month in a rotating fashion, as opposed to traditional semester starts, according to Nate Hinkel, director of communications for UA Grantham and for the UA System. The most recent term for reporting is the July/August start dates, which included 4,427 students, up nearly 200 from the same time last year.

OTHERS STABLE OR DOWN

Enrollment at the University Arkansas Community College at Hope-Texarkana is essentially stable, as this fall's enrollment is 1,188, only three fewer than last fall.

The University of Arkansas Community College at Morrilton reported a slight dip in 11th day enrollment this year, from 1,962 in 2021 to 1,901.

The University of Arkansas Community College at Batesville is also down modestly, from a total Fall 2021 head count of 1,113 to 1,096 this year.

Also dropping slightly this year, by about 80 students, was Cossatot Community College of the University of Arkansas, from 1,361 last fall to 1,280 this year.

Enrollment dropped at the University of Arkansas, Rich Mountain to 690, down from last fall's official head count of 718. 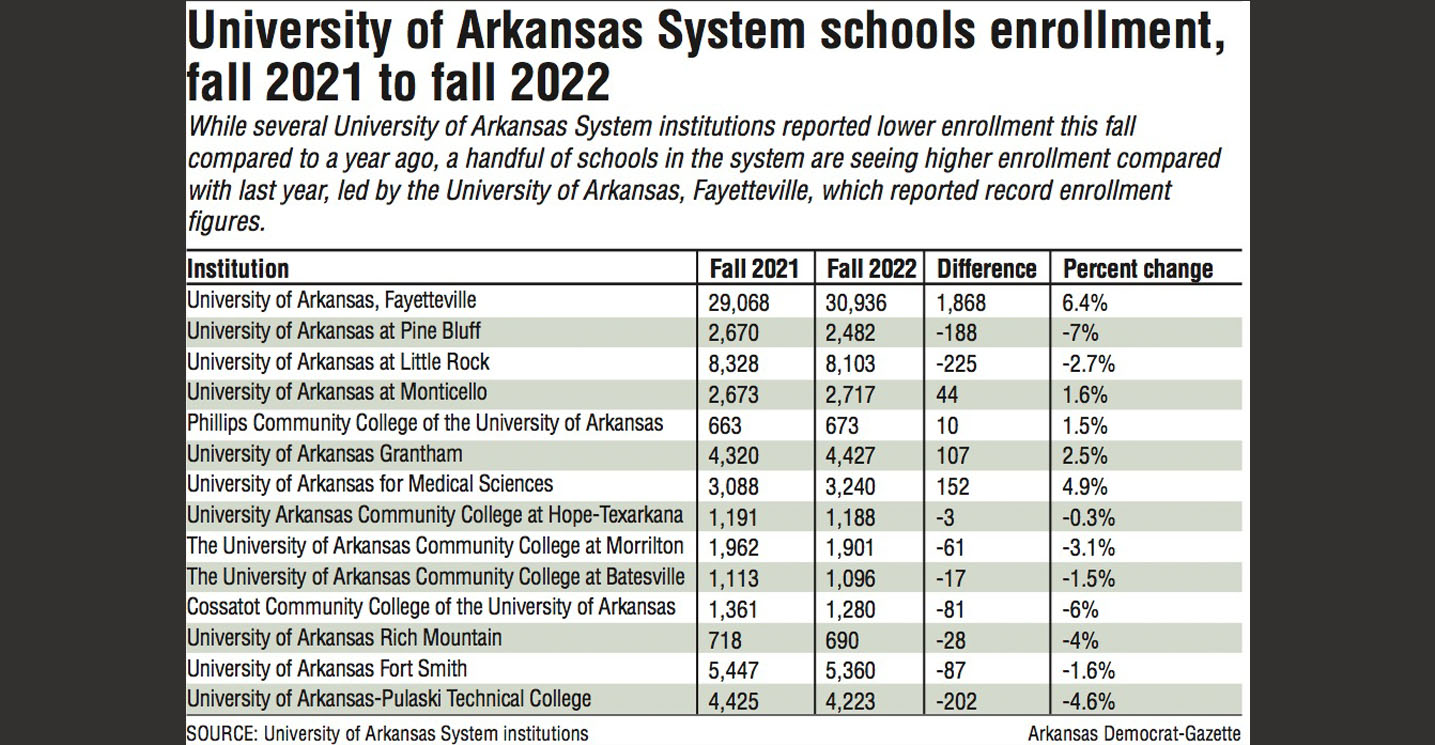