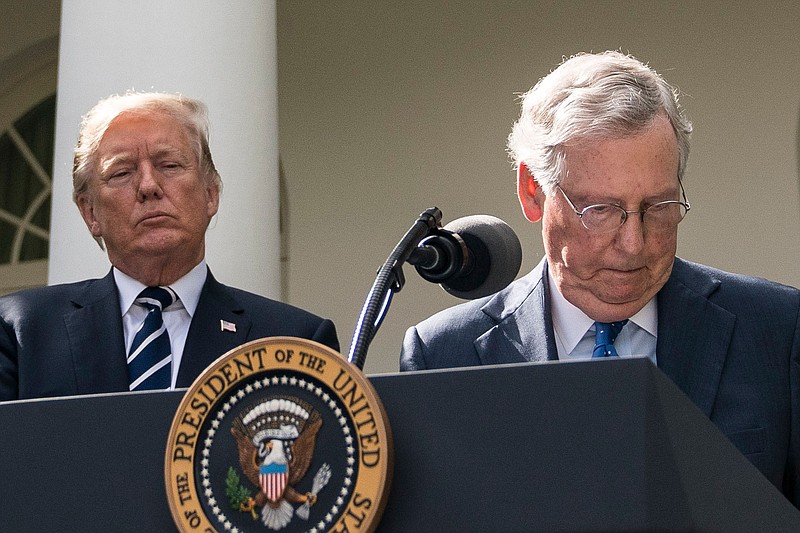 Senate Majority Leader Mitch McConnell (R-Ky.) speaks with President Donald Trump in the Rose Garden after a meeting at the White House on Monday, Oct. 16, 2017. MUST CREDIT: Washington Post photo by Jabin Botsford.

WASHINGTON -- Former President Donald Trump is facing pushback for an online message toward Senate Minority Leader Mitch McConnell, R-Ky., that many viewed as a threat.

"He has a DEATH WISH," Trump posted Friday on his Truth Social platform, criticizing McConnell for agreeing to a deal to fund the government through December. He also disparaged McConnell's wife, Elaine Chao, who served as Trump's transportation secretary and was born in Taiwan, in racist terms, calling her "his China loving wife, Coco Chow!"

The post marked a further escalation in an increasingly strained relationship between the two Republican leaders. Trump has repeatedly impugned McConnell's negotiating positions and called on GOP senators to replace him as their leader.

They often had a tense working relationship during Trump's presidency and fell out after the 2020 election -- when Trump refused to concede and tried to overturn the results, and the Jan. 6, 2021, attack on the Capitol.

McConnell's office did not immediately respond Saturday to a request for comment.

A Trump spokesman said it was "absurd" to interpret the post as a threat or call for violence, suggesting that the reference to a death wish was "political" rather than literal.

Incendiary statements from Trump have repeatedly inspired his supporters to turn to violence. Jan. 6 rioters, in the moment and in court proceedings, have said they believed they were acting on Trump's wishes. Lawmakers of both parties have faced increasing threats after crossing Trump.

More recently, after Trump's attacks on the FBI in response to a search warrant at his Mar-a-Lago resort, a gunman tried to breach the bureau's Cincinnati office while posting about it on Truth Social. He was later killed by police.

Chao resigned from Trump's Cabinet shortly after the Jan. 6 attack, saying the assault "deeply troubled me in a way I simply cannot set aside." McConnell, in a speech after the following month's impeachment trial, condemned Trump as "practically and morally responsible for provoking the events of that day," though he did not vote to convict.

In this year's primaries, McConnell tried unsuccessfully to recruit moderate Republican governors such as Chris Sununu of New Hampshire, Larry Hogan of Maryland and Doug Ducey of Arizona to run for the Senate.

McConnell's allies intervened in some races to oppose pro-Trump candidates, such as Eric Greitens in Missouri and Don Bolduc in New Hampshire, but did not weigh in against Trump-endorsed candidates such as Blake Masters in Arizona and Herschel Walker in Georgia.

McConnell has publicly lamented that some of the party's nominees are making it harder to win back the chamber, though he has lately expressed more confidence in their chances.