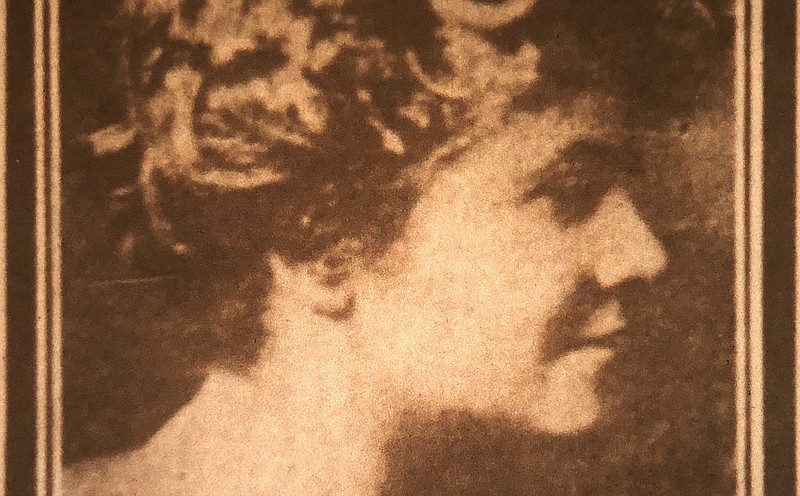 The Nov. 11, 1923, Arkansas Gazette reported that Pauline E. Rodgers was headed to Chicago for a winter of musical training. (Democrat-Gazette archives)

When Municipal Judge Harry C. Hale vanished off the face of Arkansas newspapers in 1922, he didn't die out. He went to California.

Reader 1: What is she talking about?

Reader 2: Am I supposed to know this Hale guy?

Perhaps I ought to back up and explain that today's Old News continues a story we started Sept. 26. Confused folks can scan it here: arkansasonline.com/1003old. Go. I'll wait.

Ready? OK. Although the Little Rock chapter of the Ku Klux Klan attacked his character and tried to force him out as Little Rock municipal judge, what actually happened was Hale quit.

Reports about his resignation in the Little Rock Daily News, Arkansas Democrat and Arkansas Gazette mentioned that he might visit or move to California. Search California newspapers digitized at Newspapers.com, and there he stands, spattered with ink for the next 30 years.

Lo, it came to pass that Harry Clark Hale, resident of Los Angeles, passed the California bar in April 1923 and commenced the practice of law. But he kept his connections with Little Rock. For instance, during the Great Flood of 1927, he contributed to a relief fund.

And in May 1928, he ranked among the "prominent" attendees of a picnic for California's new Arkansas State Society. A banner headline in the San Pedro News Pilot warned, "1,000 Arkansans Invade City Tomorrow."

Boat tours would delight them with "competent" guides. The sit-down picnic luncheon would include free coffee!

Their main speakers were Charles F. Parsons, head of the Federation of State Societies, and Mrs. Helen Dortch Longstreet, widow of "a gallant Confederate general of cavalry." Radio station KFON-AM, 1250, Long Beach, was to carry their words "to the world," along with songs by the Texarkana Quartet and the Long Beach Municipal Band. The quartet sang "The Arkansas Traveler."

In 1930, the Los Angeles Times reported that District Attorney Buron Fitts had named Hale a deputy district attorney. Fitts assigned him temporarily to complaints, to write charges against suspects.

A former lieutenant governor, Fitts enjoyed taking aim at powerful types. He hit a doozy in March 1931, and Hale drew up the lurid complaints for the "Love Mart" scandal. Accused were an actress known as "Olive Day," her husband and real estate financier John P. Mills — all said to have trafficked more than 100 beautiful women, including four teens.

The traffickers kept their books using an index card file, and their lair included a custom-built, soundproofed apartment in one of Mills' buildings. This apartment had a bed whose headboard included a hidey hole for witnesses with cameras.

Thoughtful interior design considers every function of a space, even blackmail.

The news was salacious as all get-out, but Fitts failed to bring a shred of evidence against the big target, Mills, and so charges against him were dropped. After an investigation, Fitts himself was charged with bribery. Was the Love Mart case a shakedown? Yes or no, Fitts was acquitted in 1936. (See pages 14 and 15 here: arkansasonline.com/1003mart.)

In May 1931, Hale wrote the complaint charging "razor king" King Camp Gillette's chauffeur with manslaughter for an auto wreck in which a woman died. And there were other flashy cases. But let's flashy-forward to November 1950, and a small but amusing hearing written up in the L.A. Times.

In this "Case of the Stolen Handbag," 18-year-old Lois Barger of Artesia, Calif., testified that her mother, Mrs. Oralee Barger, 38, was a thief. Dry-eyed and without a trace of bitterness, the scowling Lois was a prosecutorial star during Mom's preliminary hearing on a grand theft (from auto) charge: that Oralee had snagged a handsome, hand-tooled purse from a car belonging to a faithless boyfriend. Counting the $90 cash, $73 paycheck, wristwatch and other items inside, that handbag was worth $407.

"After Lois took the stand and said she is now living with her grandparents in Artesia, Dep. District Atty. Harry C. Hale, white haired and venerable prosecutor, declared:

"'Now, Lois, I'm going to ask you some questions about your mamma. I don't like to do it. It embarrasses me. But I'm going to do it.'"

In reply to Hale's questions, Lois grimly threw Mom under the bus.

All this talk of court is delightful, but I was most drawn to a very different item in the Times. Among engagement listings on April 14, 1932, was this:

I see no evidence in California papers that Hale ever married before this engagement a decade after he left Little Rock. Several other Harry Hales made news for marrying, divorcing or spousal abuse in California, but their residences don't match what I think we know about Harry C.

'R' IS FOR RODGERS

According to U.S. Census records and newspaper accounts, Pauline Ethelynne Rodgers was the daughter of a Methodist minister, the Rev. John T. "Buck" Rodgers. Among many callings during a long life, he was pastor of Little Rock's Highland Methodist Church.

Pauline was born in 1884. She completed one year of high school. She was active in the United Daughters of the Confederacy. During Hale's decades in town, she was well known as a wonderful soprano, pianist and organist.

For six years, she was organist and choir director of Christ Church at Capitol and Scott streets. She sang at weddings and in community theater and conducted the Crescent Theatre orchestra. She performed with the Musical Coterie. She played for dance parties. She played for the public "sings" that proliferated after the Great War. She sang and sang and sang some more.

In 1916, she accompanied a male quartet at a campaign rally for Mayor Charles E. Taylor (and Hale was a Taylor ally).

There is no way that a social fellow like Harry C. Hale did not know Pauline Rodgers in a town as small as Little Rock. We should consider their acquaintance a fact. But we must accept that it in no way suggests she had anything whatsoever to do with the White City dance floor incident that preceded Hale's resignation in 1922. There's no evidence.

Whatever he did remains a mystery.

In November 1923, 39-year-old Pauline spent a winter in Chicago, studying voice, harmony and pipe organ. And she got engaged.

In July 1924 at Christ Church, she married Frank Thayer Whited, 65 years old and one of the most prominent lumbermen in three states, especially Louisiana. He was Shreveport royalty.

Frank died in August the next year. His 35-page will left the bulk of his estate to his six children. The Times of Shreveport reported that under a prenuptial agreement, Pauline was not an heir, but he left her 500 shares of Frost-Johnson Lumber Co. stock, a $35,000 insurance policy, a $15,000 Aeolian harp and other household items.

Pauline continued her musical career, including singing at a Little Rock party in honor of Sen. Hattie Caraway. And then somehow, somewhere, Pauline and Harry C. reconnected.

They married on April 17, 1932, and lived out their lives in Santa Monica, Calif., as a prominent couple, hosting Arkansas friends in their home and traveling to Little Rock now and then to let Pauline sing at a wedding.

Harry retired in 1952, age 70, but continued an active civic life, including writing letters to editors. He died in 1963; Pauline died the next year.

Old attractions can be surprisingly resilient.