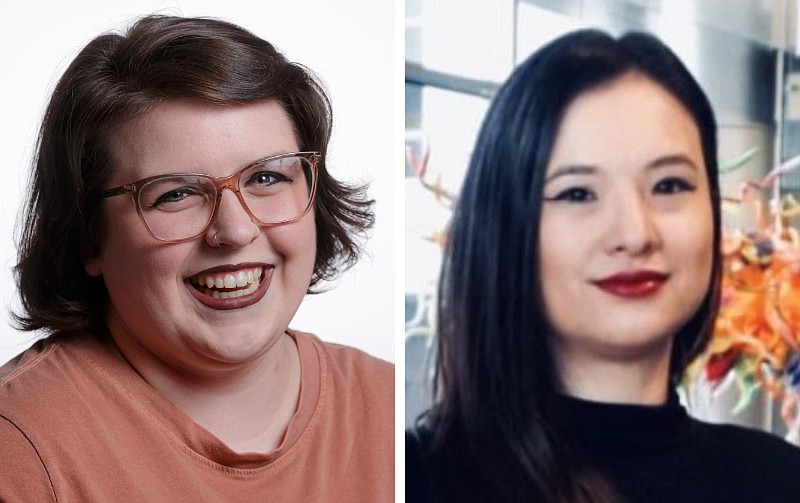 Kristina Johnson (left) and Susie Reece are shown in these undated courtesy photos. Johnson is a University of Arkansas at Little Rock graduate student who wrote the grant proposal that will provide suicide-prevention training at the Garland County Detention Center and the Pulaski County Regional Detention Center, while Reece began discussing suicide awareness and prevention with those incarcerated in Garland County nearly a decade ago. (Courtesy photos)

A pair of Arkansas detention centers will receive suicide awareness, education and prevention training from the Arkansas chapter of the American Foundation for Suicide Prevention's Project 2025 Corrections Program in order to arrest the rise in suicides among corrections officers and the incarcerated in the state.

"Suicide is a real issue, the leading cause of death in jails, and they need someone to advocate for them and fight for their lives," said Kristina Johnson, a graduate student in professional and technical writing at the University of Arkansas at Little Rock who wrote the grant proposal that will provide the training at the Garland County Detention Center and the Pulaski County Regional Detention Center.

"The corrections community is very overlooked," and both corrections officers and the incarcerated "are at very high risk for suicide, so this is a matter of saving lives," Johnson said.

Suicide "is a big concern" within correctional institutes, not only for inmates, but for staff, said Steven Elrod, chief deputy of corrections for the Garland County sheriff's office. "This is one of the most-stressful work environments, so we want to assist our employees."

That can include everything from "stress management techniques" to "making sure they know there are people they can talk to," Elrod said. "We like to be involved with programs like this, [because] it's worked really well in the past."

Corrections workers do have a higher rate of suicide than the general public, and "any loss of life due to suicide is so sad, so to be able to provide the right help is vitally important," said Rodney Shepherd, deputy director of the Pulaski County Regional Detention Center. With more training, staff can recognize possible warning signs in one another and assist, or "get them to someone else who can assist them," such as the licensed, certified social worker at the detention center.

The pilot program will begin later this fall -- September was Suicide Prevention Month -- by training detention center staff members with a goal of eventually moving on to the incarcerated themselves, said Johnson, who plans to graduate in December. By training detention center staff, those workers can spot -- and address -- suicide warning signs not only in one another, but in those who are incarcerated.

Suicide prevention is part of the initial training for new employees at the Garland County Detention Center, and "we offer additional annual training, but we know we don't have all the answers," Elrod said. "We want to hear ideas and new strategies from experts so we can collaborate to make us better."

The program is "tailored for corrections" institutes, Johnson said. It'll assist survivors of suicide attempts, those who may be considering suicide, those who have lost someone due to suicide, and those trying to prevent others from suicide.

From 2000 to 2019, suicide deaths for inmates in Arkansas jails nearly quadrupled, from three to 11, a more significant increase than nationally, where inmate suicide deaths rose only 13% over that same period, Johnson said. "I know there's not a lot of sympathy for [inmates] from people, but they're still someone's father or son, mother or daughter, brother or sister, and I care a lot about doing good for people who need it."

Shepherd has worked in corrections for two decades, and has dealt with multiple suicides of incarcerated individuals during that time, so "anything we can do to be better equipped to recognize those signs, the better off we all are," he said. "The families never understand" why their family member died from suicide -- "it's very tough and difficult to understand -- and I'd like the folks here to be able to step in and stop someone who may be going down that road."

While "there's not a lot of data on suicides of corrections officers, their suicide rate nationally is 39% higher than other professions" -- according to a Steven Stack and Olga Tsoudis 1997 study, "Suicide Risk Among Correctional Officers: A Logistical Regression Analysis" -- and it's "double the rate for police officers," Johnson said. This issue "needs attention, and they need the tools to prevent suicides."

Not only will detention center staff be educated about suicide prevention through this grant, but they'll be equipped with the skills and knowledge to train others, said Jacqueline Sharp, area director for the Arkansas chapter of the American Foundation for Suicide Prevention. "We give you the tools and encourage you to continue into the future."

"We find it's more impactful when this [message] comes from peers," Sharp added. "When it comes from in the community, it means more, and individuals open up more."

Elrod is particularly enthusiastic about the Project 2025 pilot program because it's in person, rather than remote.

"We're trying to get away from the online trend," not only because so many are burned out on remote meetings that proliferated during the pandemic, but also because sensitive topics like suicide prevention are better in "collaborative group discussion," he said. "Officers can share what they're seeing on the job with inmates and their" fellow officers.

AFSP-AR received a $10,000 grant from the Roy and Christine Sturgis Trust based on Johnson's proposal, and the Project 2025 Corrections Program is also funded by a University of Arkansas for Medical Sciences Translational Research Institute Community Based Participatory Research award, according to Angie Faller, news director, communications and marketing, UALR. Following nine months of education programs in the two detention centers, ASFP-AR members will gather feedback on what was successful about the program, which will help them gain insight on growing the program to other correctional institutes in the future.

Project 2025 aims to reduce the suicide rate by 20% by 2025, with a key element being reaching "areas that haven't been considered as much" previously, such as health care and the corrections community, Sharp said. "We're taking a real research and science-based approach to this."

"I love the concept of treating mental health as physical health, and we work hard to educate people," Sharp said. "We want people to know they're not alone, and that there is hope."

Susie Reece has a longstanding relationship with both detention centers included in this pilot, which made them natural choices, Sharp said. "She's been going there for years to talk about suicide prevention."

Reece began discussing suicide awareness and prevention with those incarcerated in Garland County nearly a decade ago, which led to her developing relationships with the workers, as well, she said. "These are all community members, one way or the other, [so] this impacts us all; even the incarcerated, the goal is to rehabilitate them and get them back into the community."

When Reece began her work with the incarcerated, she was admittedly "going against the current, because this is a very niche area, but one good thing about the pandemic is more awareness about mental health, for everyone," she said. "We all need mental health care."

Reece lost her father to suicide when she was 10, which helped inculcate a desire to succor others.

"There are so many out there who want to help, so if you feel alone, you can find" support, including through the suicide prevention foundation, said Reece, a "champion" for Project 2025. "For too long, this hasn't been publicly discussed, but how do you fix something if you're afraid to discuss it?"

Anyone interested in becoming involved with Project 2025 is welcome to contact Reece at Susie@susiereece.org, she said. "We're definitely looking for volunteers."