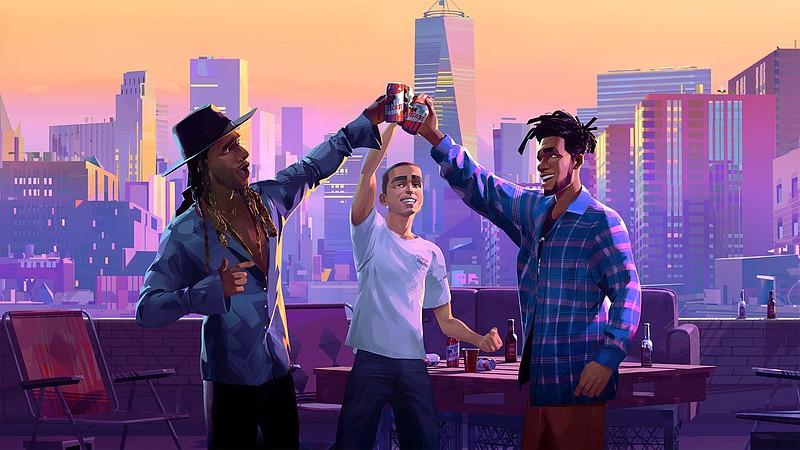 Ty Dolla $ign is the voice of Ky (from left), Timothee Chalamet is Jimmy and Scott Mescudi, better known as Kid Cudi, is Jabari in a scene from the animated film “Entergalactic.” (Netflix via AP)

LOS ANGELES — When Scott "Kid Cudi" Mescudi recorded the bulk of his new album, the melodic rapper wanted to visually highlight the project's songs without depending on short music videos.

The Grammy winner initially thought about turning his concept album into an anthology series, until he linked up with "black-ish" creator Kenya Barris, who suggested that Cudi go the animation route. The musician took heed and has brought his songs into colorful light in the Netflix adult-animated romantic comedy "Entergalactic" — inspired by his eighth studio album of the same name. Both were released last Friday.

"When you bring music and animation together, those things sometimes last forever," said Barris, who said he was immediately "blown away" after hearing one song from Cudi that focused on love. After listening to the track, the filmmaker reached out to some Netflix executives, who were looking for animation projects at the time, and brought them into the studio to listen to the song.

"When you heard the song, you immediately knew it was so visceral and visual at the same time," Barris recalled. "You could see that this could be something special. You could see that Cudi and his music was made for this."

For Cudi, it was a long process selecting the best songs to tell the overall story.

"We really had to sit and fine tune what we wanted as far as tone," he said. "As you can see in the show, a lot of the color palettes, the purples, the browns, the fuchsias, the orange, these are the colors that you feel and you see when you listen to the music."

Cudi said going the animation direction instead of live action gave him more freedom to "explore the abstract." The visuals and modern designs of "Entergalactic" are similar to "Spider-Man: Into the Spider-Verse," which won the Oscar for best animated feature in 2019.

"We were able to move and transform through Jabari's mind, taking him into space when he's riding his bike," Cudi said. "He and Meadow were in their world, in their trance and flying around through space. This was all important to push the story, push the narrative. You can watch this and be like 'this could be live action.' But I feel like there's just no other better way to tell the story other than animation."

Barris said they wanted to make New York into an animated character of its own.

Cudi paid homage to his late friend and designer Virgil Abloh, who inspired the fashion in the animated project. Cudi said Abloh's designs played a major role in telling the story.

"It was super, super important to have his presence in there because those are his animations," he said of Abloh, who died at 41 from cancer last year. Abloh was the artistic director of Louis Vuitton menswear and founder of the popular Off-White fashion house.

Cudi's "Entergalactic" album and the television special were released on Sept. 30, Abloh's birthday — a synchronicity that was not planned, Cudi said.

"I said the only way this show is going to be fresh — like in my mind and the way I want it to be — is to approach this like it's live action, and we get a costume designer, and we have them kind of sit and go through every character, and we fine tune how these characters are supposed to look based on their personalities," he said.

Jessica Williams, who voiced Meadow, said she was excited to take part in the project after Cudi approached her about the idea of creating a Black love story.

"I think we're going to be telling New York City love stories forever, like it's just going to happen forever because it's a great place to to fall in love," she said. "I'm really excited about this because it hasn't been done before. It's really great to see these two Black people fall in love in this space like this."