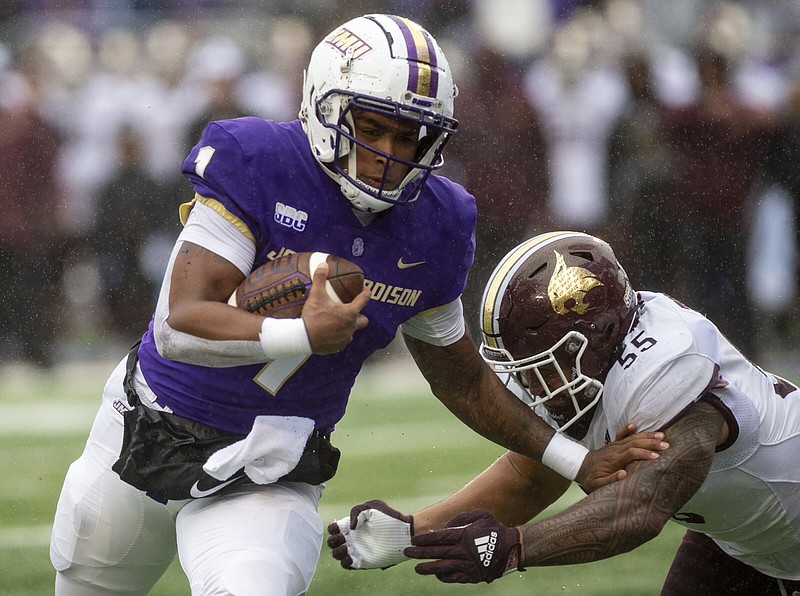 James Madison quarterback Todd Centeio (left) fights off Texas State linebacker Sione Tupou as he runs for a touchdown in the Duke’s 40-13 victory over the Bobcats on Oct. 1 at Harrisonburg, Va. Arkansas State hosts James Madison on Saturday looking to hand the Dukes their first loss of the season. (AP/Daily News-Record/Daniel Lin)

JONESBORO -- The house trailers were there in 1974. They were still there in 1976 when Ron Carroll returned to Arkansas State as a full-time athletic trainer.

The football program moved to a temporary building ahead of the 1977 season, in a spot where a St. Bernard's Urgent Care facility now sits just beyond the south end zone of Centennial Bank Stadium.

That lasted eight months. The facility burned down and ASU was back in the trailers until 1980.

Those years, more than a decade prior to ASU's transition from NCAA Division I-AA to I-A, make it all the more remarkable when Carroll now turns to look out his office window.

He can see the tangible progress from his 40-plus years -- a stadium and football headquarters that's seen the injection of more than $30 million and the players who represent a program with more outright Sun Belt Conference titles than any other school.

"It doesn't matter where we've come from," Carroll told the Arkansas Democrat-Gazette. "We love to tell stories, but we can't live in the past."

Except ASU's history, along with the struggles of so many schools that have made the jump from the Football Championship Subdivision to the Football Bowl Subdivision, makes James Madison an outlier.

At 4-0, the Dukes come to Jonesboro on Saturday with a chance to remain unbeaten in their first FBS season and possibly claim a spot in the Associated Press poll.

It's the kind of rapid progress few beyond Harrisonburg, a town of just more than 50,000 nestled in Virginia's Shenandoah Valley, could have expected.

"We're not in the [Sun Belt] just to come in and compete," James Madison Athletic Director Jeff Bourne said. "If we go back and look at where we were 20 years ago and say, 'What is it that we aspire to do?' To me, we have followed that path, we continue to make progress on it, and I am firmly committed."

The records tell much of the story. ASU's first season as an FBS (then-Division I-A) program in 1992, the school went 2-9 under former Alabama coach Ray Perkins.

John Bobo replaced Perkins the next year, but only marginally improved to 2-8-1 before posting a 1-10 mark in 1994.

In those nearly two decades, ASU was led by four different head coaches and jumped between conference affiliations, with four seasons as an independent and five in the Big West before ultimately joining the Sun Belt's inaugural football conference in 2001.

That doesn't even consider administration. Six individuals served as either president or chancellor in those 19 years, and the school also had six athletic directors.

"Football was just kind of like a boat that wasn't anchored in the water," Carroll said.

Jeff Bourne, on the contrary, has held his post as the Dukes' athletic director since 1999. The university's current president, Jonathan Alger, has been at James Madison since 2012.

Bourne began considering a jump to the FBS level in the early-to-mid-2000s, beginning the expansion of Bridgeforth Stadium at a cost of $62 million in 2009.

Eleven years removed from renovations to its football stadium, the Dukes opened their new basketball arena in November 2020 -- the 8,500-seat Atlantic Union Bank Center came at a cost of more than $139 million.

In the intervening time, James Madison opened new baseball and softball stadiums, added a multi-sport complex for soccer, cross country, track and women's lacrosse and updated its football and athletic headquarters, not to mention announcing renovation plans for its Convocation Center earlier this year.

James Madison's student newspaper, The Breeze, projects the school will spend over $23 million on football alone during its five-year transition to the FBS level.

But athletic expenditures at James Madison have topped $50 million each of the past four years, per the Knight-Newhouse College Athletics Database.

By comparison, ASU's highest-spending year on record was 2016 at $43.1 million, well beyond the Sun Belt Conference median -- a mark that has never gone much above $35 million. Of the 10 Sun Belt schools from last year's iteration, none spent more than Coastal Carolina's $36.1 million.

All of this was carefully planned, Bourne explained. His staff always compared best practices and financial allocations with their peers but began to develop a plan for an FBS transition as far back as a decade ago.

When the Sun Belt started to consider expansion in the wake of a new round of realignment ignited by Texas and Oklahoma's move to the SEC, James Madison was ready -- not least because of its personnel and financial stability.

"We certainly were spending a lot more time looking at the FBS opportunities than what we ever told the public," Bourne said.

The Mountaineers joined the Sun Belt in 2014, reached a bowl game in 2015 and earned a spot in three of the conference's first four championship games beginning in 2018.

So it was fitting that the highlight of James Madison's still-brief FBS stint came two weeks ago at Appalachian State.

Down 28-3 midway through the second quarter, the Dukes scored 29 unanswered points to pull off a stunner at Boone, N.C.

It was an eye-catching result in the larger college football world. The Mountaineers had knocked off Texas A&M on the road two earlier and were regarded as Sun Belt East Division favorites.

But if the words of James Madison Coach Curt Cignetti from July were a genuine indication of his belief in his team, then its 32-28 win was not entirely shocking.

"We're a relentless football team, the kind you hate to face," Cignetti said at Sun Belt Media Days in New Orleans. "I see these guys stepping up to another level and I'm really confident in these guys. ... There's no doubt in my mind that we will be highly competitive."

Cignetti can have that confidence because he's at the helm of a program that reached the FCS semifinals five of the past six years.

It's not all that dissimilar from an ASU program that won back-to-back Southland Conference crowns in 1985 and 1986 -- when Larry Lacewell's team also reached the Division I-A title game.

Both schools had the pedigree to make the jump. But only one had done the necessary preparation.

Carroll, now ASU's assistant athletic director for sports medicine, can laugh about the struggles now. "The 90s were horrible," he said.

But it's why he never hesitates to remind those who only know a modern-day ASU of its humble FBS roots.

"There's always more bells and whistles out there," Carroll said. "Look at the indoor [facility], look at the training room with the pools we've got, look at the equipment. ... To see what we have today and what's been built, it didn't all happen just overnight."