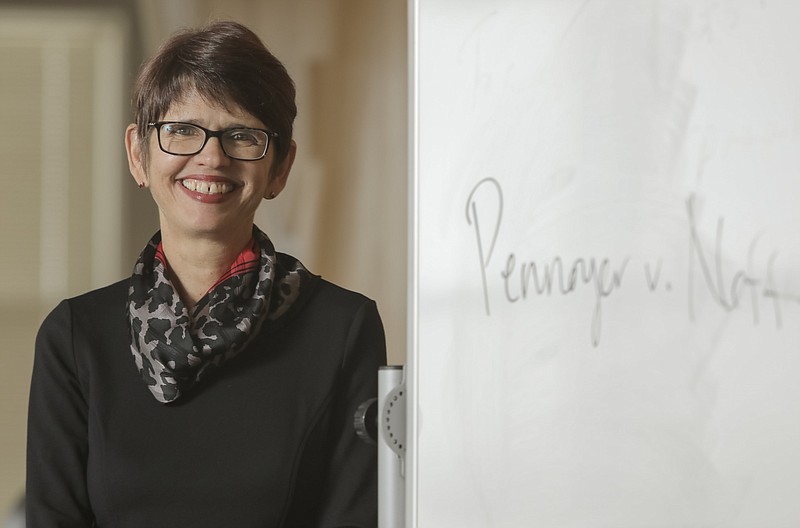 Theresa Beiner, dean of the William H. Bowen School of Law, is shown at the school in Little Rock in this December 2019 file photo. (Arkansas Democrat-Gazette file photo)

Theresa Beiner, the first non-interim female dean at the William H. Bowen School of Law at the University of Arkansas at Little Rock, will step down from that role effective July 1, 2023, and return to a faculty position.

Beiner, 58, originally joined the Bowen School of Law in 1994, and she became dean in 2018, according to Angie Faller, news director, communications and marketing at UALR. Beiner notified the university of her decision in June, and UALR "will announce next steps for the initiation of a national search for Dean Beiner's replacement in the near future."

Beiner planned to serve as dean for five years, and "that five-year term will end on June 30, 2023," she said. She told UALR administrators of her plans this summer so that "the university would have time to search for a new dean."

Beiner previously served as the law school's associate dean of Faculty Development and associate dean of Academic Affairs, according to UALR. She has won Faculty Excellence Awards in both teaching and scholarship.

"I've been honored to lead the law school over the past four-plus years and am looking forward to rejoining the teaching faculty at the law school" for the 2023-2024 school year, Beiner said.

Born and raised in New Jersey, Beiner double-majored in mathematics and rhetoric at the University of Virginia, completing a Bachelor of Arts degree in 1986 before moving on to law school at Northwestern University and then clerking for John F. Grady, then-United States District Judge for the Northern District of Illinois, according to UALR.

Beiner then joined the San Francisco law firm of Howard, Rice, Nemerovski, Canady, Falk & Rabkin, where her main practice area was general civil litigation -- with an emphasis on employment discrimination, antitrust, and environmental litigation -- before coming to teach at UALR.