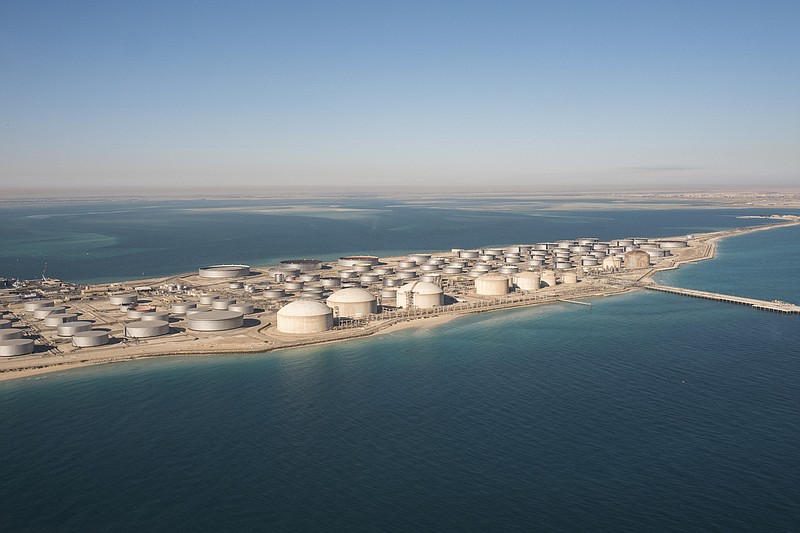 WASHINGTON -- President Joe Biden will reevaluate the relationship with Saudi Arabia after it teamed up with Russia to cut oil production in a move that bolstered President Vladimir Putin's government and could raise gasoline prices in the United States just before midterm elections, a White House official said Tuesday.

"Certainly in light of recent developments and OPEC+'s decision about oil production, the president believes that we should review the bilateral relationship with Saudi Arabia and to take a look to see if that relationship is where it needs to be and that it is serving our national security interests," the official, John Kirby, told reporters on a conference call.

Kirby, the strategic communications coordinator for the National Security Council, signaled openness to retaliatory measures proposed by Democratic congressional leaders who were outraged by the oil production cut announced last week by OPEC, the international group, and its allies.

Among other things, leading Democrats have proposed curbing security cooperation with Saudi Arabia, including arms sales, and stripping OPEC members of their legal immunity so they can be sued for violations of U.S. antitrust laws.

"He is willing to discuss this relationship with members of Congress," Kirby said of Biden. "He knows that many members have expressed concerns on both sides of the aisle."

In an earlier appearance on CNN, Kirby sounded a note of urgency: "The timeline's now and I think he's going to be willing to start to have those conversations right away. I don't think this is anything that's going to have to wait or should wait, quite frankly, for much longer."

Democrats announced legislation requiring the removal of U.S. troops and defensive systems from Saudi Arabia and the United Arab Emirates.

Blumenthal and Khanna unveiled their legislation one day after Sen. Robert Menendez, D-N.J., said it was unacceptable that OPEC and its allies had moved to cut oil production and effectively bolster Russian coffers as Moscow prosecutes its war on Ukraine.

Menendez promised to use his position as chairman of the Senate Foreign Relations Committee to block any future arms sales to the Saudis.

"There simply is no room to play both sides of this conflict -- either you support the rest of the free world in trying to stop a war criminal from violently wiping an entire country off of the map, or you support him," Menendez said. "The kingdom of Saudi Arabia chose the latter in a terrible decision driven by economic self-interest."

Menendez did not warn the White House before announcing his intention to block future Saudi arms sales, Kirby said.

Sen. Dick Durbin of Illinois, the second-ranking Democrat in the Senate, said Saudi Arabia clearly wanted Russia to win the war in Ukraine.

"Let's be very candid about this," he said Tuesday on CNN. "It's [Russian President Vladimir] Putin and Saudi Arabia against the United States."

Biden's willingness to consider retaliatory measures represents a significant shift for a president who had sought to improve relations with Saudi Arabia in recent months and reflected deep anger in the White House about the decision last week by OPEC, which is led by the Saudis, to cut oil production by up to 2 million barrels a day.

Still, it was not immediately clear how far Biden was willing to go, or whether he was using the public comments as a warning to Saudi Arabia or as an effort to quiet domestic critics who have faulted him for being soft on the kingdom.

No special team of aides was established to conduct a formal review. No deadline was set for a conclusion and no options were mentioned for consideration.

Press secretary Karine Jean-Pierre said Tuesday that the White House has no timeline for its review nor has the president appointed an adviser to serve as point person.

"They are certainly aligning themselves with Russia," Jean-Pierre said. "This is not a time to be aligning with Russia."

"The United States should seek a new strategic compact with Saudi Arabia rather than a divorce," said Martin Indyk, a former diplomat in the Middle East who is now at the Council on Foreign Relations. "We need a more responsible Saudi leadership when it comes to oil production and regional behavior. They need a more reliable U.S. security understanding to deal with the threats they face. We should both step back from the brink."

Aaron Miller, who spent many years in government dealing with Middle East affairs, said Biden needed to weigh the potential drawbacks of a break with Saudi Arabia, a vital ally to the United States in fighting terrorism and countering Iran in the region.

"Biden will have to decide whether the objective is to punish Saudi Arabia to preempt domestic criticism or to try to alter MBS's behavior," he said, using the nickname for Saudi Crown Prince Mohammed bin Salman. "The latter will be hard, even if Biden moves to suspend all arms sales -- a response that could impact U.S. policy in the Gulf with regard to Iran."

The president was subject to withering criticism for visiting Saudi Arabia in July and giving a fist bump to Mohammed, despite a campaign promise to make the kingdom an international "pariah" for the killing of Saudi journalist Jamal Khashoggi.

The CIA has determined that Mohammed ordered the operation that led to the 2018 murder of Khashoggi, who was a columnist for The Washington Post and a resident of the United States. The crown prince denied being involved.

Overcoming his own reservations, Biden went along with advisers who had argued that it was worth the political hit to restore ties with Saudi Arabia for a variety of reasons, such as the need to bolster energy markets given the effort to isolate Russia, one of the biggest oil producers in the world.

While no specific announcements were made during Biden's July visit to Jiddah, U.S. officials said at the time that they had an understanding with Saudi Arabia that it would increase oil production in the fall and lower gasoline prices heading into the crucial congressional elections.

The Saudi decision to do the opposite last week in defiance of U.S. entreaties was a blow to Biden and opened him to further criticism even from fellow Democrats who argued that Saudi Arabia should be punished.

After falling for more than three months, gas prices are rising again, increasing by 12 cents a gallon on average over the last week to $3.92, according to AAA. The White House was counting on falling gas prices to buttress Democratic efforts to keep control of both chambers of Congress.

The anger in Washington at Saudi Arabia was exacerbated in the last two days by Russia's latest strikes against civilian targets across Ukraine. The Saudi alignment with Russia came even as China and India have put more distance between themselves and Moscow over the war in Ukraine.

Democrats increasingly framed the dispute with Saudi Arabia in terms of the kingdom's willingness to aid Putin's aggression.

"Saudi Arabia's disastrous decision to slash oil production by two million barrels a day makes it clear that Riyadh is seeking to harm the U.S. and reaffirms the need to reassess the U.S.-Saudi relationship," Khanna said. "There is no reason for the U.S. to kowtow to a regime that has massacred countless civilians in Yemen, hacked to death a Washington-based journalist and is now extorting Americans at the pump."

"This is not the time for business as usual with Mr. Putin or the Kremlin," Kirby said.

As for the Saudis, Blumenthal said, "We cannot continue selling highly sensitive arms technology to a nation aligned with an abhorrent terrorist adversary."

Putin hailed OPEC's decision to limit oil production as he met Tuesday with the leader of the United Arab Emirates for talks on fostering economic ties.

Speaking at the start of his talks in St. Petersburg with Sheikh Mohammed bin Zayed Al Nahyan, the ruler of Abu Dhabi and president of the United Arab Emirates, Putin hailed the ties between the two countries as important for regional and global stability.

"Despite all the difficulties that exist in the international relations today, ties between Russia and the United Arab Emirates are an important factor of stability in the region and the entire world," Putin said.

The Russian leader noted Al Nahyan's support for the decision of the OPEC+ group that includes Russia to limit oil production to shore up oil prices, saying that "our decisions, our action, aren't directed against anyone."

Putin said: "Our actions are aimed at ensuring stability in global energy markets to make both consumers of energy resources and those who deal with production and supplies feel calm, stability and confidence, to help balance supply and demand."

Many in the West saw the decision by OPEC and its allies as a move that would help Putin finance Russia's action in Ukraine.

The United Arab Emirates has maintained close business ties with Russia and sought to refrain from joining the sanctions imposed by the U.S. and other Western allies over Moscow's action in Ukraine.

"I'm aware of your concern about the development of the situation and your desire to contribute to the settlement of all disputed issues, including today's crisis in Ukraine," Putin said.

Information for this article was contributed by Peter Baker of The New York Times and by Aamer Madhani, Ellen Knickmeyer and staff members of The Associated Press.