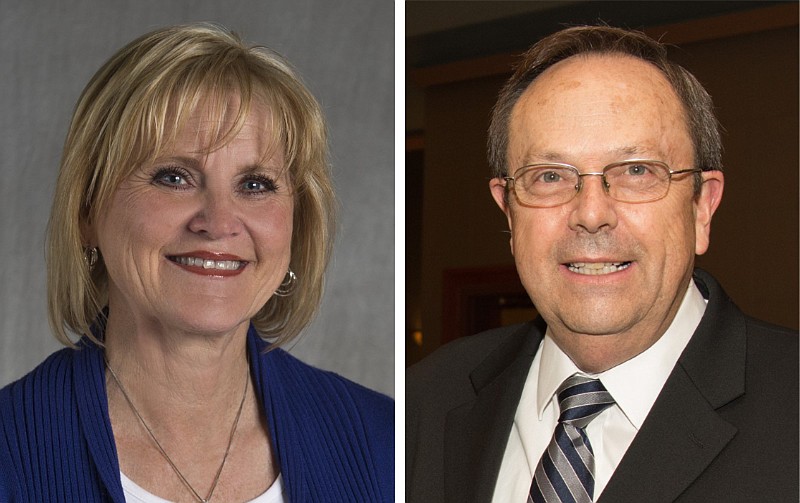 An unlikely pairing of a longtime marijuana legalization advocate and a conservative anti-cannabis group announced Wednesday that they are teaming up to defeat Arkansas' cannabis legalization amendment.

Melissa Fults, a longtime advocate for marijuana legalization, said she is aligning herself with the Family Council Action Committee, a conservative advocacy group opposed to legalizing marijuana, to urge Arkansans to vote against the proposed amendment to the state's constitution that would legalize recreational marijuana.

Standing behind a podium inside the Capitol, Fults noted how unlikely it is she would be standing in solidarity with Jerry Cox, executive director of the Family Council Action and a conservative advocate who has campaigned against marijuana legalization.

"It saddens me to stand up here and say that even though I think we should have recreational [marijuana] legal and make sure people quit going to jail for it, Amendment 4 is not the answer," Fults said.

The proposed constitutional amendment, also known as Issue 4, would legalize recreational cannabis for adults in Arkansas. Those 21 and older would be allowed to possess up to one ounce of marijuana in Arkansas if the amendment is passed. The amendment would limit the number of dispensary licenses to 12o and the number of licensed cultivators to 20.

But for Fults, the amendment would be a giveaway to corporate medical dispensaries at the cost of consumers. If passed the amendment also would limit the state Legislature's ability to regulate cannabis, meaning future reforms would have to come through another ballot initiative, Fults said.

"This amendment is not a start; it is a brick wall," Fults said. "We can go no further. We will be at the mercy of a handful of people that don't really care about the patients or the people. They care about the money."

Speaking for about 20 minutes, Fults listed the reasons why those in favor of marijuana legalization should oppose the amendment. Among the top issues for Fults was the fact the amendment does not include any expungement for those convicted of marijuana possession.

"If someone was arrested and charged today for marijuana possession, that record will stay with them forever," Fults said. "Yet if this [amendment] passes and somebody else was caught with that same amount of marijuana, guess what, nothing would happen to them."

Fults also said the amendment does not include a provision that allows people to grow marijuana plants at home, which would give consumers priced out of the cannabis market a cheaper option.

If passed, the amendment could mean CBD or hemp products could be considered marijuana, potentially limiting their availability, she said.

Cox echoed Fults' statements, calling her a much-needed ally in the fight against the amendment.

"The people of Arkansas need to realize that Issue 4 is not just an enemy to the Family Council Action Committee and to Melissa [Fults'] organization, it is an enemy to our entire state," Cox said. "This is a massive take over of the entire cannabis industry by a very narrow, wealthy special interest group."

When asked, Cox clarified he would not support legalized cannabis under any circumstances and had previously campaigned against the 2016 constitutional amendment to legalize medical marijuana. Last week, Cox pledged to lead a social media and radio ad campaign to defeat the amendment.

Fults has been a longtime advocate for the drug, working as one of the lead campaigners for the medical cannabis amendment. She is executive director of the nonprofit Arkansans for Cannabis Reform. Fults had proposed her own amendment to legalize cannabis but scrapped that effort, instead pledging to defeat the Adult Use Cannabis Amendment.

Eddie Armstrong, chairman of Responsible Growth Arkansas, did not respond Wednesday to requests for an interview.

Armstrong, who is a medical marijuana consultant and former state legislator from North Little Rock, has previously said the amendment would be an economic coup for the state, citing a study conducted by the Arkansas Economic Development Institute that said recreational marijuana would bring $460 million to the state over five years.

Large donations have made their way into the coffers of advocacy groups both for and against the marijuana amendment. According to disclosures last month, anti-marijuana groups raised $1.8 million in August, mostly from two donors.

Ronald M. Cameron, chairman of Mountaire Corp., donated $1 million to the anti-marijuana group Safe and Secure Communities, according to disclosure forms from the Arkansas Ethics Commission. Cameron, a Republican Party donor from Little Rock, has donated a total of $1.25 million to the group.

Illinois businessman Richard Uihlein, CEO of Uline, a distributor of shipping and packaging materials, donated $750,000 to Safe and Secure Communities in August.

Cameron also has donated $78,600 to the Family Council Action Committee, accounting for the entirety of their donations in August.

The amendment effort is largely backed by the cannabis industry in Arkansas. Many of the 38 companies with licenses to sell medical marijuana have donated to the effort to legalize the drug recreationally. If the amendment passes, dispensaries that already have medical marijuana permits will be issued state licenses to sell the drug recreationally.

Responsible Growth Arkansas, which has led the campaign for marijuana, raised $605,000 in August, the entirety of which came from medical cannabis businesses based in Arkansas.