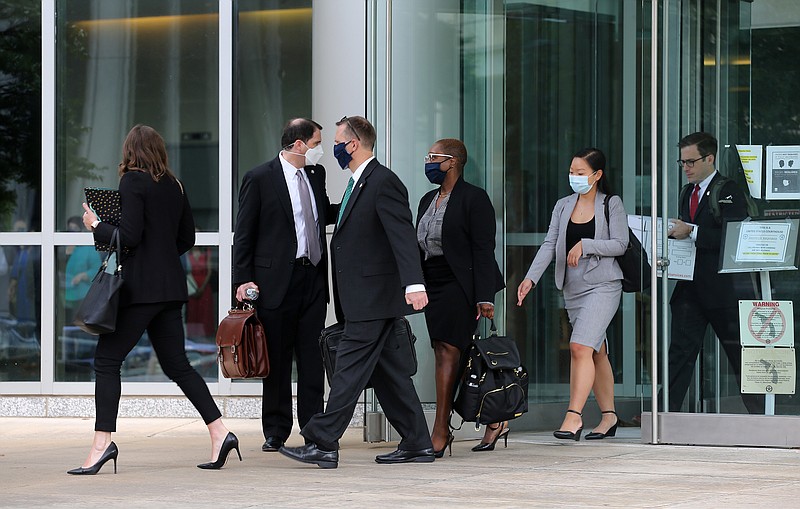 Testimony begins today in a trial that could have far-reaching ramifications nationally as four teens and their families hope to permanently strike down an Arkansas law outlawing gender-affirming health care for transgender children.

Act 626 of 2021 -- the Save Adolescents From Experimentation Act -- was passed after both the state House and Senate voted by large margins to override a veto by Gov. Asa Hutchinson.

It was challenged in a suit by the American Civil Liberties Union, and a federal judge in July 2021 issued a temporary injunction blocking it from being enforced while the matter is in court.

The condition is defined by the Mayo Clinic in Rochester, Minn., as the feeling of discomfort or distress that might occur in people whose gender identity differs from their sex at birth or sex-related physical characteristics.

The suit by the ACLU and ACLU of Arkansas contends the law violates the equal protection and due process clauses of the 14th Amendment and free speech protections under the First Amendment.

It was filed on behalf of four transgender teens and their families living in Arkansas and two physicians, Michele Hutchison and Kathryn Stambaugh. It named Arkansas Attorney General Leslie Rutledge, Arkansas State Medical Board Director Amy Embry, and the 14 members of the Medical Board as defendants.

Holly Dickson, executive director of the ACLU of Arkansas, said at the time that if the law were to be allowed to go into effect, families of transgender youths would be forced to leave the state to seek appropriate medical care.

Last week, attorneys with the ACLU and some of the plaintiffs talked about the case during a 45-minute conference call with reporters.

One plaintiff, Lacey Jennen, talked about the change in her daughter's personality once she had access to proper medical care for her gender dysphoria.

"After she came out to us and began receiving her affirming health care, we began to notice her confidence and smiles again," Jennen said.

"She found joy in shopping and styling outfits not only for herself but for her two sisters. They love to swap clothes and accessories, which is really fun to watch."

She said as a parent, "I never thought I'd have to fight for my daughter to be able to receive the medically necessary health care her doctors say she needs."

Trans youth and their families have been subjected to "relentless attacks by politicians who dehumanize them and deny them the medical care they need," Jennen said.

She said the decision to seek care to help her daughter transition was not made lightly or without a great deal of thought and discussion both inside the family and in consultation with medical professionals with expertise in treating gender dysphoria.

To leave the state to seek care elsewhere, she said, is not a viable option.

"Arkansas is our home. We've lived here our entire lives," Lacey said, her voice thick with emotion. "Our parents, our siblings, our grandparents, church, our entire support system are all here in Arkansas. We do not want to have to leave our home to provide necessary medical care for our daughter."

Another plaintiff, Donnie Saxton, confessed during the call that he was not always a supporter of transgender rights. He said he knew little about transgender issues before his son, Parker, came out.

"But as I've watched Parker suffer and the things he's gone through I've educated myself and I've learned more," Saxton said.

"I'm constantly learning and trying to understand what he's actually going through. I wish I could say that through his life, he's been happy and confident and comfortable in his skin but it's just not true."

Before beginning gender-affirmation treatment, Saxton said, his son suffered from anxiety and depression and "had a hard time looking in the mirror."

"Like the rest of us," Saxton said, "he just wants to see the person that he is looking back at him."

Saxton said like other parents, he and other parents of transgender children want their children to be able to live their best, most productive lives.

He said the Arkansas law, if allowed to stand, presents a significant roadblock to that goal. If the law is not permanently enjoined, he said, it will deny his son care that is "life saving."

Being in the spotlight, Saxton said, has been difficult for him and for Parker, but he said taking a stand was something they saw as necessary.

"We're not activists," he said. "Parker just wanted to quietly transition and go about his day-to-day life. This really gave us something to fight for, and we felt like we needed to do it on his behalf."

U.S. District Judge James M. Moody Jr. issued the temporary order blocking the law on July 21, 2021, just a week before it was set to take effect.

The decision was upheld by a three-judge panel of the 8th U.S. Circuit Court of Appeals in August.

Rutledge's office has appealed that ruling, asking for a hearing before the full 8th Circuit.

In a statement texted to the Arkansas Democrat-Gazette on Friday, Rutledge defended the law, saying it protects children from "experimental surgeries and treatments for the purpose of gender transition."

She said the law does not prohibit counseling services or medications for psychiatric diagnoses of children who identify as transgender and does not prevent adults from seeking such treatment.

"It is my hope that parents and children will be empowered by this information and avoid these permanent, life-altering procedures or medications for children," Rutledge said. "The SAFE Act protects children from life-altering, permanent decisions that they may desire to make as an underage child but could regret as an adult."

The lawsuit asks for a judgment declaring that the law is unenforceable and an injunction permanently blocking its implementation.

The suit also asks that the plaintiffs be awarded monetary compensation for costs and expenses, including attorneys fees.

Dickson, the ACLU of Arkansas executive director, said Arkansas "has been and continues to be ground zero for attacks on families and children."

She said the state has been embroiled in fights on almost every front to deny equal treatment to the LGBTQ community in Arkansas.

"We've had cases on the rights of children to be placed with family members and with other wonderful foster and adoptive homes with people who are LGBTQ," Dickson said. "We've had cases of children of same-sex couples [wanting] to have both their parents listed on their birth certificates, and of course, marriage equality struggles which provide many protections to families and children. This latest attempt at a ban is just part of the same old strategy to try and keep Arkansans and Americans divided so that people in power can stay in power and score political points at the expense of their most vulnerable constituents."

The bench trial before Moody is expected to last about two weeks.