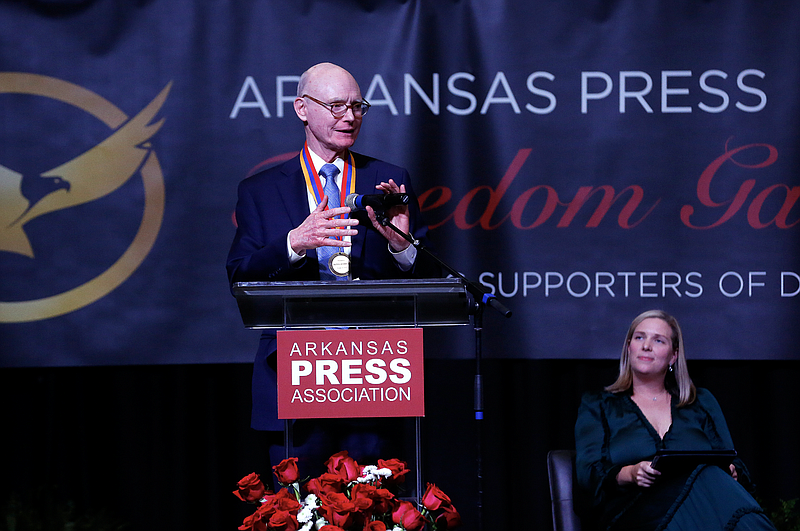 Walter Hussman Jr. will retire as publisher of the Arkansas Democrat-Gazette by the end of the year, he said Thursday night at the Arkansas Press Association’s inaugural Arkansas Press Freedom Gala at the Statehouse Convention Center in Little Rock.

Hussman, 75, rose from placing comics in the Camden News for 25 cents an hour at age 10 to creating the Democrat-Gazette, when as publisher of the Arkansas Democrat he bought the assets of the Arkansas Gazette at the end of the newspaper war in 1991.

He also led the newspaper into the digital age by reserving the newspaper’s online stories for subscribers and ending the delivery of print newspapers to households, except on Sundays, in favor of a digital edition delivered to iPads that are provided for free to subscribers.

“The time now is for the next generation,” Hussman said Thursday night.

He did not say who the next publisher would be, although he said his successor would be named by the end of the year.

His daughter, Eliza Hussman Gaines, is the executive editor at the Democrat-Gazette.

Hussman said he has long thought that no one should be in charge of anything after age 75, and that belief influenced his decision to step down.

Although his role as publisher will come to an end this year, Hussman said he would continue to work as chairman of WEHCO Media, Inc., the family business.

He said his journey to the helm of the company began when his father returned from service in World War II with dreams of owning his own paper, leading to his purchase of the Camden News.

Along the way, Hussman attended journalism school at the University of North Carolina Chapel Hill, which now bears his name.

A point of pride in his career, Hussman said, is that he never told the editors under him what news to report or his columnists what opinions to share, even if he did not agree with them.

Among lessons from other mentor figures, Hussman said he learned from Walmart creator Sam Walton that a successful business should aim to deliver product better, cheaper and faster than the competition.

That methodology contributed to his decision to move to a digital daily paper format on the iPads, which not only saved on printing and distribution costs but also allowed readers a longer and more comprehensive paper.

“And down the road we hope it’ll pay off for our shareholders too,” Hussman added, calling back to his goal of putting readers first.

He reflected on the nature of newspaper publishing, which he said flips the usual business profit and service model on its head.

“It’s an unusual business where you’re supposed to put your customers first and your shareholders last,” Hussman said.

Also honored Thursday night were brothers Brent and Craig Renaud, documentary filmmakers who have covered inequality and conflict at home and abroad for nearly 20 years.

For Brent, who was killed in Ukraine earlier this year while covering the refugee crisis triggered by Russia’s invasion there, the honor was posthumous.

The organization also recognized Democrat-Gazette political columnist John Brummett, who like Hussman was present to receive a medal commemorating 50 years in Arkansas journalism, as well as Gov. Asa Hutchinson and Hunter Yurachek, athletics director for the University of Arkansas, who were awarded for their role making headlines in Arkansas newspapers.