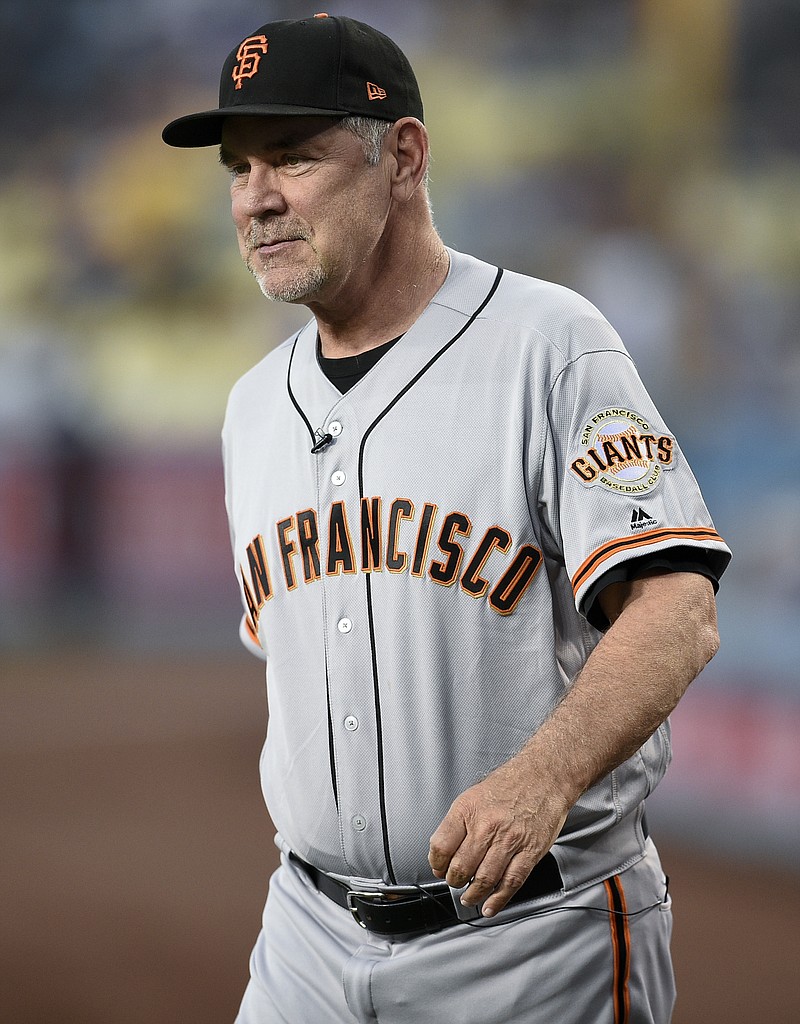 FILE - San Francisco Giants manager Bruce Bochy walks onto the field prior to a baseball game against the Los Angeles Dodgers in Los Angeles, Friday, Sept. 6, 2019. The Texas Rangers have hired Bruce Bochy as their new manager, bringing the three-time World Series champion out of retirement to take over a team that has had six consecutive losing seasons. Texas made the surprise announcement Friday, Oct. 21, 2022, just more than two weeks after its season ended. (AP Photo/Kelvin Kuo, File)

The Texas Rangers have hired Bruce Bochy as their manager, bringing the three-time World Series champion with 2,003 career victories out of a short retirement to take over a team that has had six consecutive losing seasons.

Texas made the surprising announcement Friday, just more than two weeks after its season ended. Bochy agreed to a three-year contract.

The 67-year-old Bochy hasn't managed since 2019, when he stepped away after 13 seasons and those World Series titles with the San Francisco Giants. The first championship came in five games over Texas in 2010, and the Giants won again in 2012 and 2014.

Rangers General Manager Chris Young was a pitcher for San Diego in 2006, which was Bochy's final season with the Padres before going to San Francisco.

"As we went through the interview process, Bruce's passion and excitement about returning to the dugout was very evident," Young said. "It became clear he was the ideal individual to lead our club as we continue to build a championship culture here in Arlington."

The Rangers said they'd hold an introductory news conference on Monday. Bochy said in a statement he was excited to be joining the team after several days of extensive conversations with Young and a meeting with owner Ray Davis.

"Their vision and commitment to putting together a club that can contend and win year in and year out is impressive, and I became convinced I wanted to be a part of that," Bochy said. "If I was going to return to managing, it had to be the right situation. I strongly believe that to be the case with the Rangers, and I can't wait to get started."

The Chicago White Sox, Kansas City Royals and Miami Marlins have the three remaining manager openings among the 30 teams.

Fourth-year Rangers Manager Chris Woodward was fired Aug. 15, two days before president of baseball operations Jon Daniels was also let go. Texas went on to finish 68-94, eight wins more than 2021 but what Young said after the season "was about half of our internal expectations." They lost 35 one-run games, a franchise record.

Texas was 17-31 under interim manager Tony Beasley, the longtime Rangers third base coach who was once Young's manager in the minor leagues. Several young players got extended looks during that span, and the GM said in August that Beasley wouldn't be judged solely on win-loss record. Beasley was interviewed for the job two days after the season ended.

When speaking after the season, Young had declined to comment when asked specifically if the managerial search could proceed without knowing whether Bochy had interest in the job. But he acknowledged then how much he loved playing for Bochy and expressed his respect for the man he considers one of the most successful and respected managers in the major leagues.

"With a calm and steady presence, he has a remarkable ability to connect and communicate with players, coaches, and staff, and his teams have always played with maximum effort," Young said Friday. "His knowledge of the game, as well as his integrity is unmatched."

While there were never any expectations that the Rangers would go from 102 losses in 2021 immediately to a title contender after that big spending spree, they never had a winning record at any point this season and peaked at 24-24 at the end of May. The six consecutive losing seasons are the most in the half-century since the franchise moved to Texas in 1972.

Davis has indicated the team is ready to add to its starting rotation, and potentially sign a middle-of-the-lineup bat. 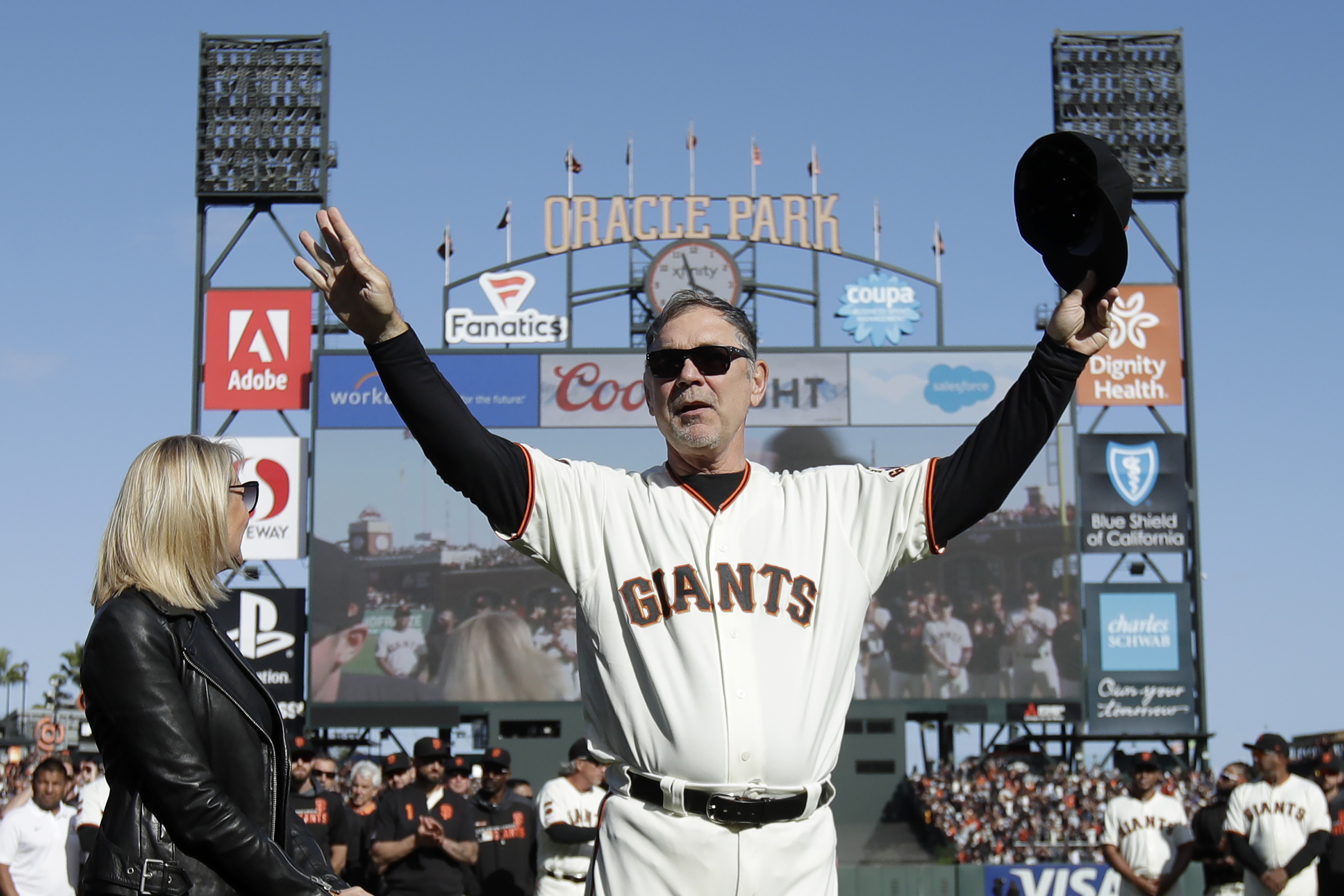 FILE - San Francisco Giants manager Bruce Bochy gestures toward fans next to his wife Kim during a ceremony honoring Bochy after a baseball game between the Giants and the Los Angeles Dodgers in San Francisco, Sunday, Sept. 29, 2019. The Texas Rangers have hired Bruce Bochy as their new manager, bringing the three-time World Series champion out of retirement to take over a team that has had six consecutive losing seasons. Texas made the surprise announcement Friday, Oct. 21, 2022, just more than two weeks after its season ended. (AP Photo/Jeff Chiu, Pool, Filer)