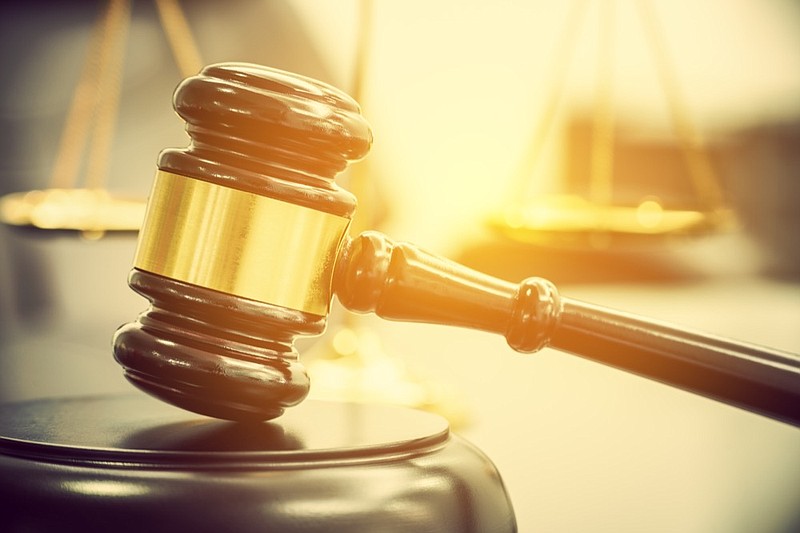 Legal office of lawyers, justice and law concept : Wooden judge gavel or a wood hammer and a soundboard used by a judge person on a desk in a courtroom with a blurred brass scale of justice behind. lawsuit tile / Getty Images

A 68-year-old Little Rock man accused of trying to hire a hitman to maim a yoga instructor who found him to be "creepy" and frightening was committed indefinitely to the Arkansas State Hospital on Friday after doctors found him incompetent to proceed.

Donald Edward Brown is charged with criminal solicitation to commit first-degree battery, a Class A felony that carries up to 30 years in prison.

He's been jailed since his May 27 arrest, three days after private investigator Keith Rounsavall went to police to report that Brown had asked him how much Rounsavall would charge to kill the instructor, 35-year-old Lauren Collins, according to arrest reports.

Brown was angry that Collins had expelled him from her classes because of his frightening behavior, with other yoga instructors following suit, Rounsavall told detectives, providing them with a recording of their conversation, reports show.

Rounsavall reported that Brown had offered him $1,000 to kill Collins or break her legs. To determine if Brown was serious, Rounsavall said he told Brown no one would murder someone for $1,000, with Brown eventually agreeing to pay $10,000 to have Collins maimed, according to police reports.

"After I reviewed the audio that Rounsavall provided, Don stated, 'I would like to have her murdered,' referring to Collins," Detective Anthony Boyd wrote in an arrest affidavit. "Keith advised, 'No, you wouldn't.' Donald stated, 'Yes, I would like her messed up."

Brown backed off from having Collins murdered when Rounsavall told him the price would be at least $20,000.

"Donald states, 'I don't want her killed then, I just want her messed up. How much would it cost if you just broke her legs?'" Keith states, 'At least $10,000," the arrest affidavit states.

Brown also discussed the possibility of killing his wife of 40 years, 65-year-old Vickie Brown, the affidavit states. She filed for divorce about about a month after his arrest. The conversation with Rounsavall ended after Brown stated he could not go forward against Collins until he got $10,000.

"The best thing to do is just drop it all unless I can produce $10,000," he told Rounsavall, according to the arrest affidavit.

In custody, Brown told police that he had met with Rounsavall but that he did not make any efforts to kill or harm anyone.

According to the affidavit, Collins, an attorney, told police that Brown was a former yoga student who "gave her the creeps and would always watch her and follow her around to different yoga studios."

Collins said she had not spoken to Brown since a 2019 incident and that he is barred from her classes. She provided emails and text messages showing when Brown had been kicked out of the yoga studios.

In August, Vicki Brown attempted to have her jailed husband committed, reporting that he "is showing signs of psychosis and dementia. He has all the characteristics of a narcissistic personality disorder."

The petition was denied a few days later, with a court finding that Donald Brown did not pose a threat to himself or others.

Based on those findings, Pulaski County Circuit Judge Karen Whatley ordered Brown transferred to the State Hospital for doctors to determine whether Brown can be restored to sanity.

According to the eight-page mental examination report, forensic psychologist Margaret Podkova found that Brown's understanding of the criminal allegations against him as well as the potential consequences was "impaired."

Brown told the doctor that he is friends with actresses Jennifer Aniston and Margot Robie and the actors Matt Damon and Brad Pitt, describing how Sandra Bullock wants to marry him.

Brown's wife provided hundreds of pages of text messages, reporting that he has seemed to be in decline since 2018, describing how he lost his longtime job because of these issues.

She further described for doctors incidents in which Brown gave out his personal identifying information and money to scammers posing as Bullock, Russell Crowe and Tom Cruise. She further noted that he has become increasingly impulsive over the past few years, losing thousands of dollars on sports betting and horse racing, the report said.

Jailers also noted that Brown had episodes in which he doesn't remember where he is or his cell number, even forgetting how to use stairs, the report said.