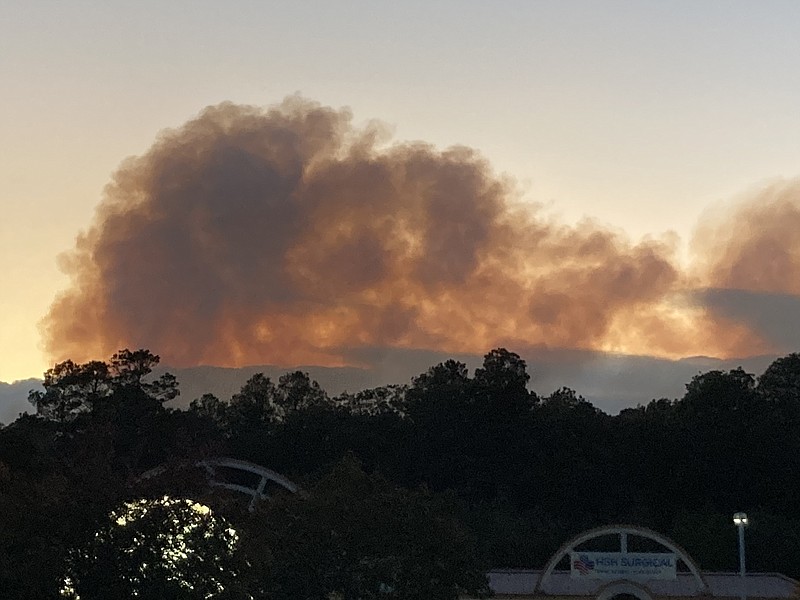 Two people burning debris during Jefferson County's burn ban started two fires that by late Monday night had charred several hundred acres, but there were a limited number of evacuations, no injuries and no structures lost, according to fire officials.

Both fires were in south Jefferson County with one of the fires, in the vicinity of Highways 63 and 54 covering more than 500 acres, and the other in the Watson Chapel area that was of unknown size.

Steven Tidwell, assistant chief with the Watson Chapel Volunteer Fire Department, said both fires started with people burning trash, which quickly got out of control in the tinder-dry conditions.

"Those fires got into the woods and they were gone," Tidwell said. "This is the worst that I've seen it in 25 years of working at fire departments. Everything is so dry. This is a big fire. Just by the grace of God have we not had any structures lost."

Brown smoke billowed up, clouding much of the western sky in Pine Bluff. Walmart employees came outside and people stood by their cars in the parking lot to stare at the smoke and take videos of it. KARK, Channel 4, posted a picture on social media showing how the smoky plume had been picked up on the station's weather radar.

Several area fire departments were helping fight the fires Monday afternoon and evening, and state Forestry Commission officials were using bulldozers to cut fire lines into the landscape in an attempt to slow the spread. Amy Lyman, with the Forestry Commission, said the agency had brought in more than one fire suppression airplanes Monday, but because of the wind that gusted to 30 mph at times, the planes could not be used.At one point in the evening, Tidwell said fire crews were making headway but the fire reached a pine plantation and quickly spread.

"Flames were topping the trees and reaching 40 to 50 feet above them," Tidwell said.

Tidwell said when fires are that powerful, fire departments back away from trying to put out the blaze and focus on protecting structures.

"At that point, when it's something that big, we let the forestry folks handle it," he said. "We're just trying to keep it from jumping roads."

Tidwell said other than his Watson Chapel Fire Department, crews from Y Community, Southeast Jefferson County, Pine Bluff, White Hall and Hardin fire departments were on the scene. Fighting a forest fire with fire trucks is difficult, he said, "but we're doing the best we can," adding that even former volunteer firefighters had shown up to help, knowing that the crews were up against a formidable foe.

Lyman said Jefferson County had brought in a bulldozer and that other bulldozers were being brought in by the Forestry Commission and being delivered from other counties in the area. One of the units had broken down, she said.

One of the fires started in the Pinewood area, Tidwell said, and crews had it quickly under control. But the wind picked up, he said, and it jumped a fire line that had been cut to stop the blaze and from there it went out of control. Tidwell wasn't sure where the other fire had started but said he had been told it also was from someone burning in their yard.

Melanie McClure with the Forestry Commission said Monday night there were eight wildfires going on in the state.

She said three homes had been evacuated and that a few other people had voluntarily left their homes, in the Kilcrease Road area off of Middle Warren Road, where the biggest fire was burning.

"We're really hoping that the front comes through quickly," he said. "If the wind will lay down a little, and the rain comes, we'll quickly get a handle on this."

Tidwell expressed irritation when talking about how the fires had started.

"There was a burn ban and we've had the ban for over a month now," he said. "It's been all over the news and very well publicized." 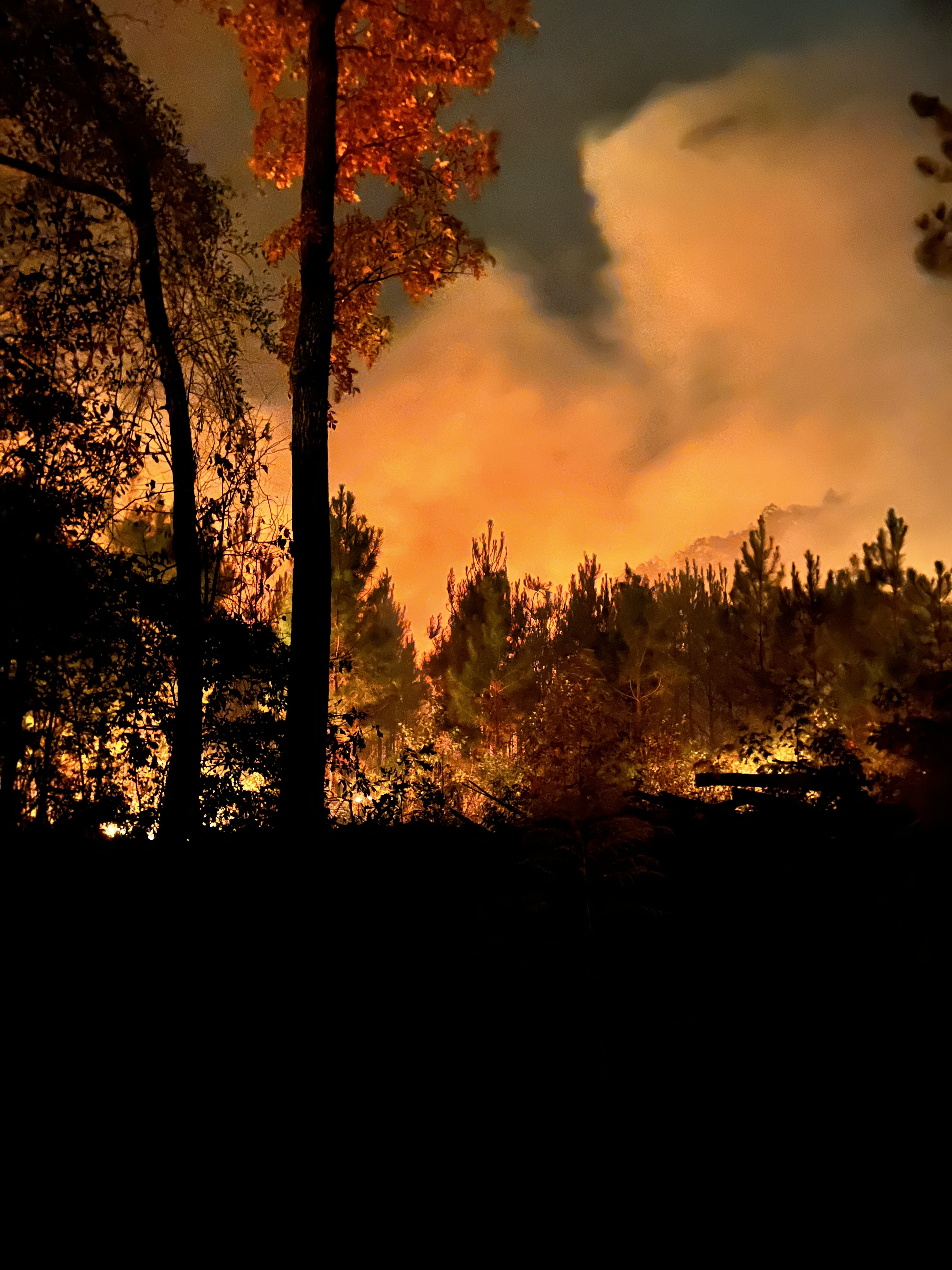 Several fire crews from around Pine Bluff worked into the night to fight two fires, one of which had grown to more than 500 acres. (Special to The Commercial) 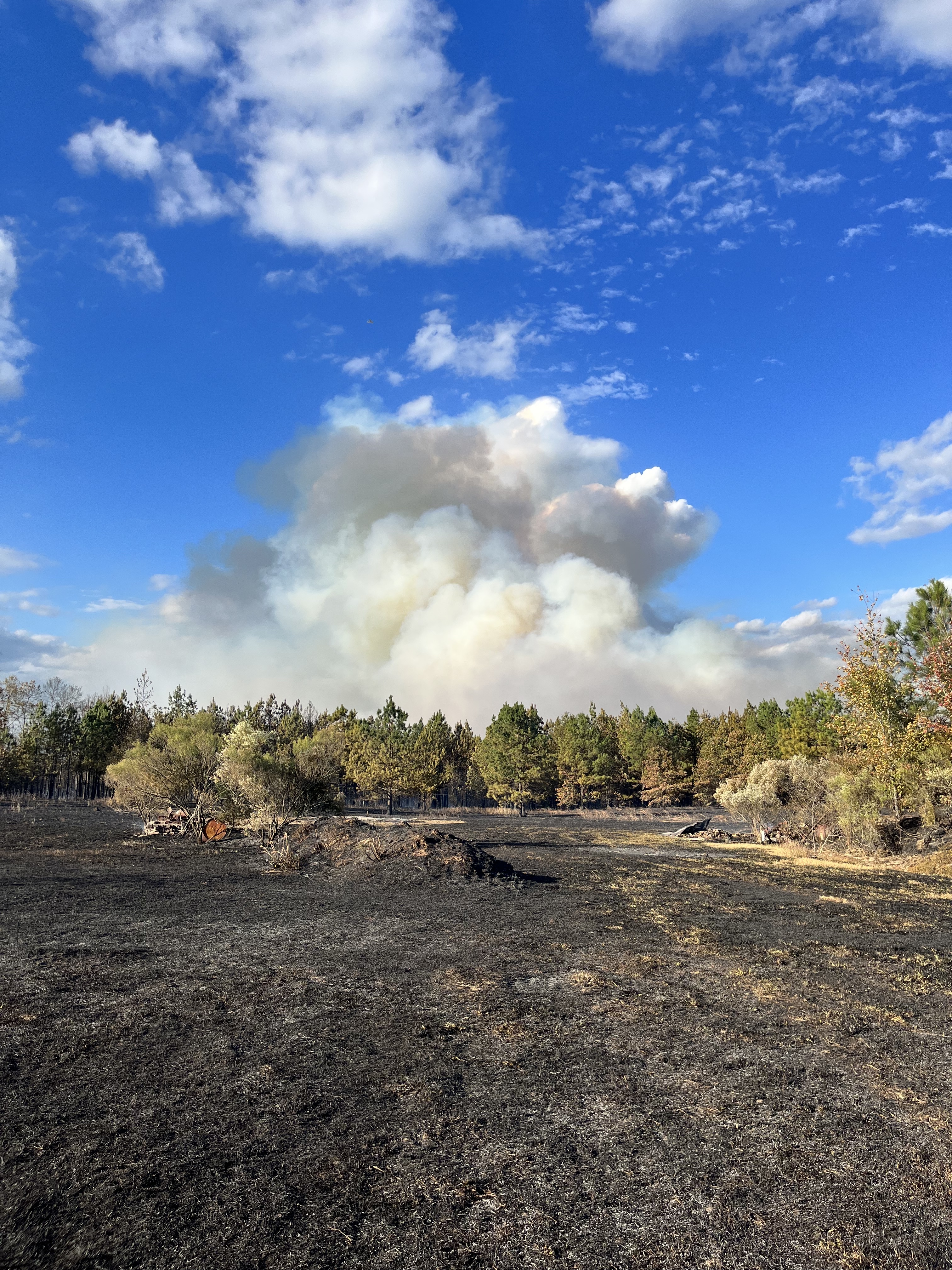 Two fires, both started by people burning debris during a burn ban, created so much smoke that it was detected a weather radar. (Special to The Commercial)