HOT SPRINGS — The Spa City is still some distance from filling all its outdoor walls with public art. But the proliferation is proceeding apace as Hot Springs moves to the forefront of Arkansas communities displaying those eye-catching murals.

Completed this year, "Remember" is one of the most striking new artworks. It spans a wall at 100 Central Ave., marking the north end of that commercial thoroughfare. The fantastical images were created by Canadian artist Danae Brissonnet as a tribute to "the nature, history and people" of Hot Springs.

Brissonnet enlisted 18 young artists from the Hot Springs area to help paint a mural finished in May at the new David F. Watkins Memorial Park farther north at 811 Park Ave. She took the youngsters to the park and spent two days teaching them how to design murals. The result is an eclectic mixture of images, including two dogs and a cat in space helmets, a headless skeleton and long-stemmed mushrooms that look like tentacles.

Heading back south, a potpourri of murals can be viewed along or near Central Avenue running past Bathhouse Row and on toward Oaklawn Racing Casino Resort.

Pastel shades evoke tranquility in "Verna's Dream," by Italian street artist Pepe Gaka at 320 Central Ave. He dedicated the mural to the late Verna Garvan, who created the popular Garvan Woodland Gardens in collaboration with the University of Arkansas' Fay Jones School of Architecture.

Gaka, whose given name is Giuseppe Percivati, earlier painted the massive "Quapaw" mural on a wall overlooking a parking lot in the 400 block of Central Avenue across from the bathhouses. The portrait of two Quapaw men in tribal attire, based on an oil painting by renowned Arkansas native Charles Banks Wilson, salutes the history of American Indians in today's Garland County.

Another Gaka creation, at 833 Central Ave., is the "Sister City Mural." Its two panels were completed in 2018 as a tribute to Hot Springs' friendship with Hanamaki, Japan. One image is a snowy mountain scene, while the other shows a row of trees with cherry blossoms. 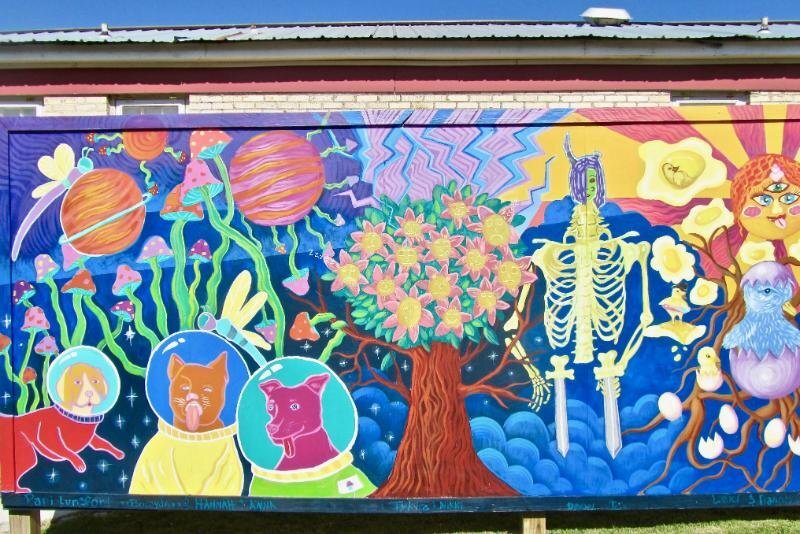 The mural in the new David F. Watkins Memorial Park was done by young painters. (Special to the Democrat-Gazette/Marcia Schnedler)
A block away, at 350 Malvern Ave., "Black Broadway" is another mural by Pepe Gaka. It celebrates the visiting Black entertainers who would stay in the neighborhood during the later decades of the Jim Crow era. Depicted as leading the painting's lively procession are members of the Hot Springs World Class High School Band.

One of the Spa City's newest and zaniest murals, completed this summer, brightens the back patio of SQZBX Brewery & Pizza, 236 Ouachita Ave. This work by Danae Brissonnet imagines an accordion-shaped pizza oven that spouts trumpets while crawling on piano keys. It can't be seen from out front, but the friendly staff welcomes visitors to visit the patio for a peek.

It's worth driving a few miles north of downtown to see the "Northwoods" mural painted on all sides of the pump house at the Waterworks trailhead, 300 Pineland Drive, overlooking Bethel Lake. Done from a design by noted muralist Camille Walala as part of the ARKanvas Initiative, the art is a lively pastiche of geometric patterns.

Information on these and other public murals in Hot Springs is available online at hotsprings.org/blog/touring-the-murals-of-hot-springs/.