TELEVISION: Zoe Saldana finds love and loss in ‘From Scratch’ 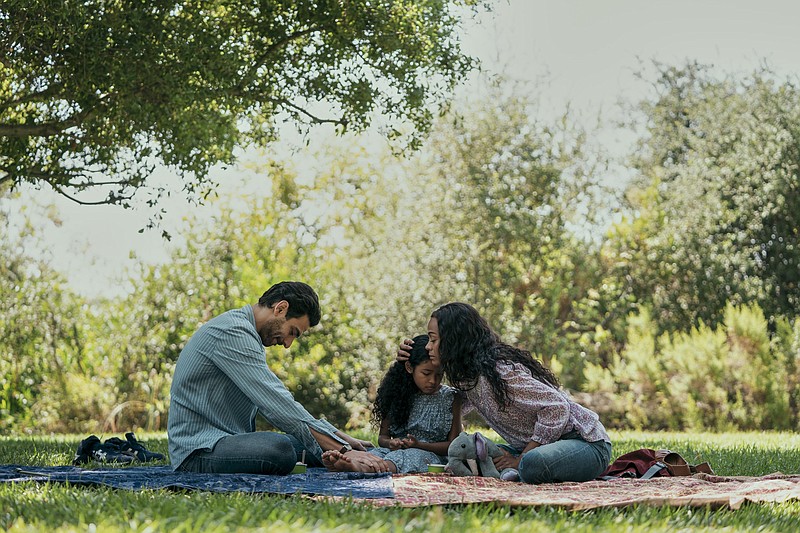 Eugenio Mastrandrea (left), Isla Colbert and Zoe Saldana perform in a scene from “From Scratch,” a new series on Netflix. (Netflix via AP/Jessica Brooks)

Zoe Saldana says filming her new Netflix series "From Scratch," stirred up emotions from her own life, ones she thought she had dealt with long ago. Her father died when she was 9-years-old, leaving her mother to care for her and her two sisters as a single mom.

"Grief is very deceiving," she said. "There's management of it but no closure."

In "From Scratch," Saldana plays Amy, an American woman who travels to Italy to study her true passion, which is art. While there, she meets a handsome local chef named Lino, played by Eugenio Mastrandrea. They fall in love and Lino follows her back to the U.S. Their fairytale, based on actor Tembi Locke's memoir, is threatened when illness strikes.

"I knew grief from the perspective of a child losing your hero," Saldana said. "I never understood it from my mom's perspective, losing a partner, losing the love of her life and having to wrestle with grieving, but also having to welcome joy in your life because you have little co-dependents that need you."

Witherspoon was so taken with the book that she acquired the rights and made it an official Reese's Book Club selection. She also brought it up to Saldana over dinner.

"She said, 'I just want you to read it. For some reason it made me think of you. I'm excited about this book. ... Read it and give me your thoughts. And if you like it, I think that you would be perfect to play the lead,'" Saldana said.

There are details in the series that don't happen in the book, or that are changed, because the Lockes were mindful they were creating television.

"We were very clear about creating a psychic distance, if you will, to be creative storytellers," Tembi Locke said. "We knew the characters were going to have to do things for the purposes of a narrative on screen that may not have happened in real life. We wanted the freedom and license to do that."

It was also a blessing for Tembi Locke to have her sister spearheading this project that was so personal and emotional.

"She not only was a big voice of encouragement to write the book, but the opportunity to lift the story further and give it a broader global audience was very honoring, quite frankly," she said. "It was a very exciting thing creatively to take on, but to do it with my sister, I knew that we could protect the essence of the book."

For her part, Attica Locke doesn't believe she needed to do much protecting because they were surrounded by a team and crew who respected the weight of the project.

"My sister, my brother-in-law's memory, my niece. All those people I love in a way that I can't put into words, but I can put into action. The love for (their story) got me up every day doing the hard work. That drove me more than protection because I think love allowed us to attract people who could either feel that or also had it within their own hearts."

Saldana agrees. "Everybody on that set knew exactly what we were there to do."

The sisters would check in with each other "when the hard moments came, and they did," Tembi said. "We'd make a plan for how to handle it."

For example, Attica Locke suggested to her sister to stay away from the set for hospital scenes.

She would say to her sister, "'Could you give me four things that you want me to make sure that I convey to the director and to the actors so you don't have to sit in the re-creation of the most difficult moments in your life. Let me be the ambassador.'"

There was also joy and fun days. Part of the shoot was in Italy. A restaurant scene where Lino seduces Amy through his cooking was a highlight. (It also happened in real life and Tembi Locke writes about it in her book.)

"That was the first scene that I was like, 'Wow, Eugenio,' because Eugenio is much younger than I am," said Saldana, who is 44; Mastrandrea is 28. "I'm like, 'Oh my God, you guys hired a child to play opposite me. Like, I'm so sorry.' I was very apologetic. He's definitely the kind of man that reads older when you meet him, but when you speak to him, he's so young and he's so, like, vibrant and so beautiful.

"And I just remember that shoot, like, when we walked in, he was like owning that kitchen, and we were all like, 'Bravo, mister.' We were making him blush a lot," she said, laughing.

Saldana also bonded with Tembi Locke over having an Italian husband. She married Marco Perego-Saldana (they each took each other's last names) in 2013 and share three sons.

"In this particular situation, it was easy for me to pull from familiar territories. Not just in the good ones, but also in the frustrating ones. To be married to an Italian is not a walk in the park every single day. It's yummy, it's delicious, it's romantic, but it's also very challenging in the sense that you're marrying an old culture that is very proud of its history and its art and its love and its food," Saldana said.

"Tembi and I would have so many laughs, bonding in that sense."