‘All Quiet on the Western Front’ 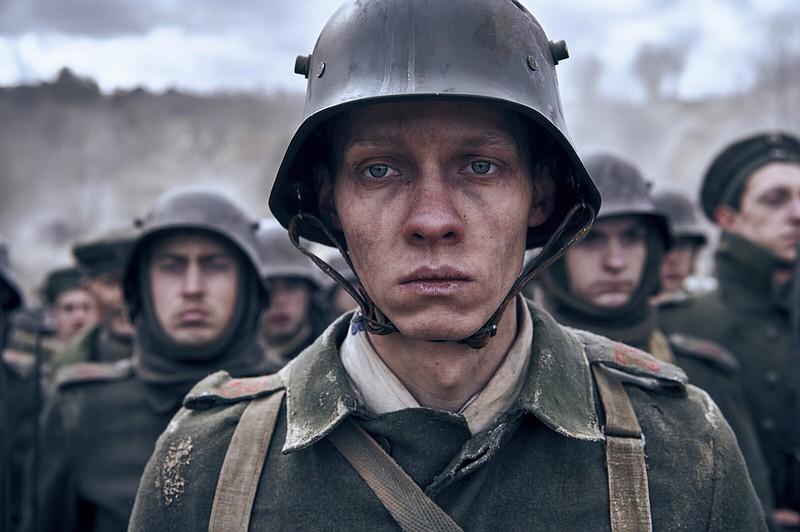 Young German soldier Paul Baumer (Felix Kammerer) has all juvenile illusions about the glory of war shattered in Edward Berger’s “All Quiet on the Western Front,” the first ever German production of Erich Maria Remarque’s anti-war classic.

Erich Maria Remarque's 1928 German novel "All Quiet on the Western Front" and Lewis Milestone's 1930 landmark American film adaptation remain definitive anti-war statements. Neither the book nor the movie was vague about its "war is hell" message, and both sought to depict it realistically and truthfully. Of course controversies followed with some leading to bannings and book-burnings in several notable countries across the globe.

Now, 92 years later, we revisit "All Quiet on the Western Front" through the lens of German filmmaker Edward Berger. Yes, there was a CBS television movie in 1979. But as far as feature films, this is the first attempt at taking on Remarque's weighty material since 1930 and (obviously) the first-ever German film adaptation. Berger's epic-scaled polemic brandishes the same scathing anti-war messaging. But he and cinematographer James Friend utilize today's technology to deliver powerful imagery both on the battlefield and on the faces of the young soldiers sent there.

Much like Remarque's novel and Milestone's film, there is nothing patriotic or partisan about Berger's movie. There are no depictions of glory on the battlefield, and you won't find a single scene that could be reasonably perceived as propaganda. Rather, this is a relentlessly bleak and unflinching account; one that emphasizes the brutality and inhumanity of war, resulting in some of the grittiest and most visceral battle sequences ever put to film. Yet the human cost always remains its focus.

The story begins with a shattering prologue that not only sets the tone, but lays out the film's message with startling clarity. A young German soldier named Heinrich, not even 20 years old, stands in a muddy trench with what's left of his regiment as the call goes out to charge. Terrified, Heinrich musters what courage he can and climbs out of the trench with his fellow soldiers, rushing toward the enemy gunfire. Bullets scream by, artillery rounds gash the earth, gnarled bodies cover the battlefield.

After cutting to the title card, the film comes back to show a lifeless Heinrich lying in a truck full of dead soldiers. We watch as the uniforms are stripped from the corpses and sent off to be washed and mended. They're then given to the next batch of starry-eyed recruits who proudly celebrate their fresh 'new' duds. It's a heart-wrenching sequence of events filmed and edited with such brutal authenticity. It gives the audience a good sense of what they're in for.

Among the new recruits is Paul Baumer (Felix Kammerer) who lies about his age to join his military-bound childhood chums Albert (Aaron Hilmer), Franz (Moritz Klaus), and Ludwig (Adrian Grunewald). The four friends join a room full of other elated young men who have all been sold the same lie. A German officer rouses them with promises of fabled glory, but it's nothing more than a devious sales pitch. There's no glory awaiting them on the frontlines. We understand that. It won't be long before the boys understand it too.

But all we can do is watch as these new troops -- giddy and naive -- joyously sing as they march toward hell, oblivious to what truly awaits them on the Western Front. But once they set foot in the muddy and blood-soaked trenches and peer across the ravaged wasteland, every romanticized notion of war crumbles. Berger wastes no time shattering their illusion, immediately thrusting the four friends (and us) into the savagery of World War I combat. Cutting no corners and sparing no details, Berger and Friend not only visualize the horror, but they make us feel a part of it. One especially intense and magnificently captured battle scene was more terrifying than anything I've seen from the horror genre all year.

The bulk of the film is shown through Paul's eyes and plays like a coming-of-age tragedy. Kammerer's sublime performance is key, channeling Paul's descent from wide-eyed, enthusiastic, scared and shell-shocked to cold and deadened. Along the way we're given some much-needed breathers as Berger pulls Paul away from the frontline, allowing him and his buddies to develop their friendships. He has especially good camaraderie with Kat (an excellent Albrecht Schuch), a seasoned older soldier who he first meets in the trenches.

Berger also spends time highlighting the vivid contrast between those orchestrating the war and those fighting it. French and German decision-makers debate and barter in the comforts of lush country estates and elegant train cars. Meanwhile young men die horrific deaths at a sickening pace. Working toward peace was real-life German official Matthias Erzberger (the always solid Daniel Bruhl) who's tasked with negotiating a surrender that would appease the prideful Prussian generals and allow Germany to bow out with its dignity. Of course history tells us France's desire to humiliate its enemy set the table for Adolf Hitler and World War II.

As Germany's entry in this year's Best International Feature Oscar race, and with Netflix gobbling up the U.S. distribution rights, "All Quiet on the Western Front" is sure to get a little more attention than it normally would. It deserves every bit of it and more. Berger hasn't just remade an old classic. He's given us an eye-opening anti-war treatise that speaks to both history and modern day. The craftsmanship alone is outstanding. But then you add the deeper themes that culminate in a final shot underscoring the war's heartbreaking cycle of death. It makes for an experience that can be hard to endure and even harder to shake. But those aren't bad things, especially with a movie and a message this potent.

‘All Quiet on the Western Front’ 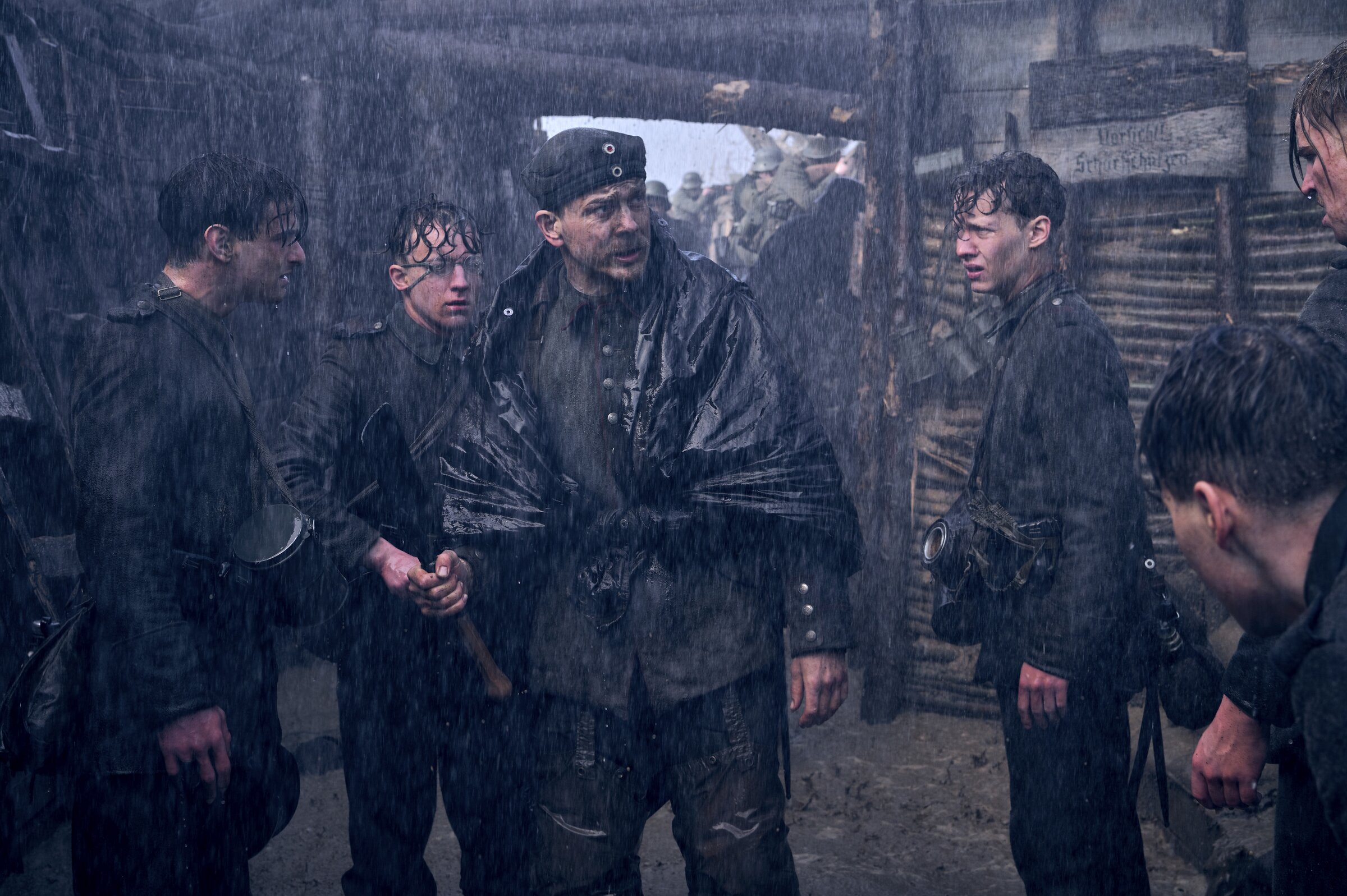 Print Headline: ‘All Quiet on the Western Front’