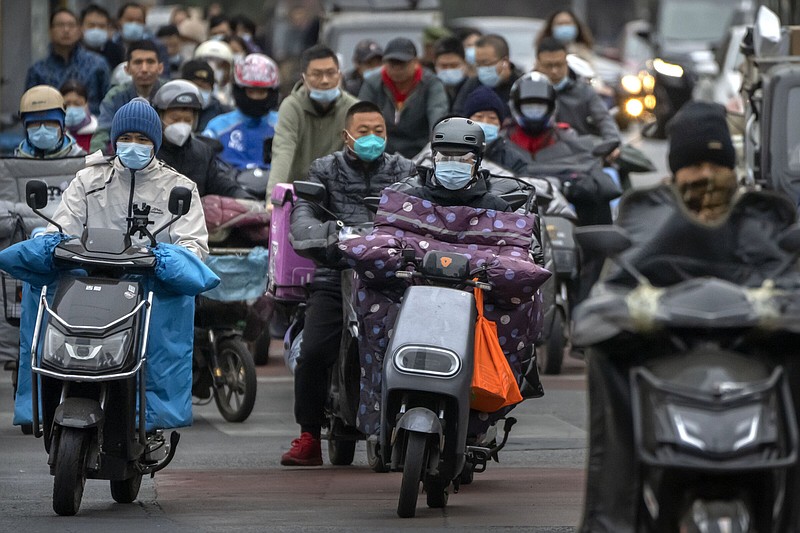 BEIJING -- China's largest city of Shanghai is ordering mass covid-19 testing Friday of all 1.3 million residents of its downtown Yangpu district and confining them to their homes at least until results are known.

China has shown no sign of backing away from its hard-line "zero-covid" policy. Strict measures have been imposed across the country, from Shanghai in the east to Tibet far to the west, where anti-lockdown protests have also been reported.

Cellphone video said to have been smuggled out of the region showed crowds of native Tibetans and Han Chinese migrants milling in the streets of Lhasa to protest a lockdown that has lasted as long as 74 days. The video was reportedly shot Wednesday. There was no sign of violence.

Lhasa has been under tight surveillance since bloody anti-government protests broke out in the city in 2008 before spreading across Tibetan areas.

Despite public anger, the former chairman of Shanghai's Communist Party Committee, the city's top official who was ultimately responsible for the lockdown measures, was given the No. 2 spot in the party's all-powerful Politburo Standing Committee -- an indication of Xi's elevation of political loyalists above those capable of gaining public support.

Li Qiang, who had been leader Xi Jinping's virtual chief of staff when he headed the eastern province of Zhejiang, has been replaced by Beijing Mayor Chen Jining, a former president of Beijing's prestigious Tsinghua University and minister of environmental protection.

Many Chinese had hoped for a relaxation of the strict anti-covid-19 protocols, which remain in place even while much of the rest of the world has opened up. China's borders remain largely closed and arrivals must undergo a 10-day quarantine at a designated place.

Despite its costs, and the World Health Organization calling it unsustainable, China credits the strategy with keeping case numbers and deaths at a fraction of those in other countries, although Beijing's figures have frequently been questioned.

In a sign China's tough measures will be maintained in the long term, Shanghai plans to build a permanent quarantine center on an island in the Huangpu River that divides the financial hub, according to the business magazine Caixin.

The $221 million project on Fuxing Island will expand existing facilities to create 3,009 isolation rooms and 3,250 beds, with construction expected to be completed in six months, Caixin said.

China's domestically developed vaccines are considered relatively ineffective and it has refused to approve foreign brands such as Pfizer, Moderna, AstraZeneca and Johnson & Johnson.

Still, China wants more people to get booster shots before it relaxes its restrictions. As of mid-October, 90% of Chinese were fully vaccinated and 57% had received a booster shot.

China has relied on domestically developed vaccines, primarily two inactivated vaccines that have proven effective in preventing death and serious disease but less so than the Pfizer and Moderna vaccines at stopping the spread of the disease.

Chinese authorities also have not mandated vaccination -- entering an office building or other public places requires a negative covid-19 test, not proof of vaccination. And the country's "zero-covid" approach means that only a small proportion of the population has been infected and built immunity that way, compared to other places.

As a result, it's unclear how widely covid-19 would spread if travel warnings and quarantine mandates were lifted. Until then, a hodgepodge of regulations and restrictions will remain in place across the country of 1.4 billion.

Meanwhile, authorities ordered Wednesday the lockdown of 900,000 people in Wuhan for at least five days. In remote Qinghai province, the urban districts of Xining city have been locked down since last week.

In Beijing, Universal Studios has closed its hotels and attractions "to comply with pandemic prevention and control."