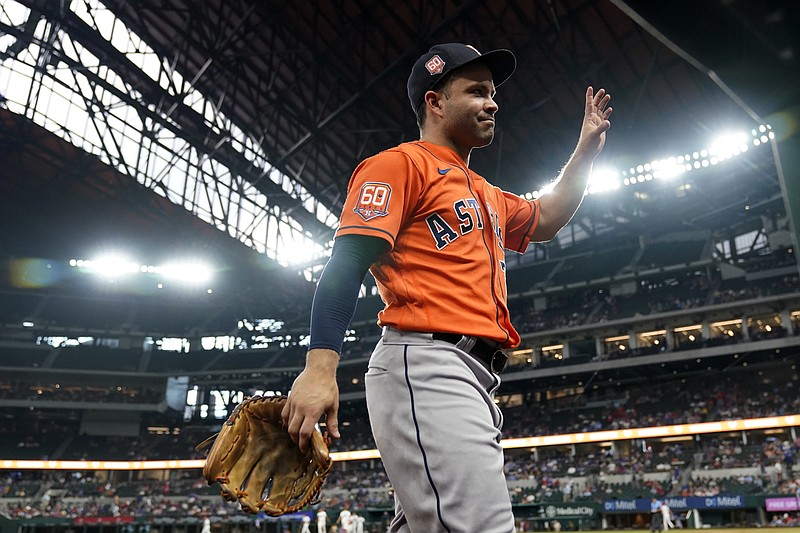 Houston Astros' Jose Altuve waves to cheering fans as he walks into the dugout in the eighth inning of a baseball game against the Texas Rangers in Arlington, Texas, Wednesday, Aug. 31, 2022. (AP Photo/Tony Gutierrez)

NEW YORK -- Brandon Nimmo saved Jacob deGrom and the New York Mets with a breathtaking catch at the center-field fence, and Edwin Diaz entered to Timmy Trumpet's live horn at Citi Field before closing out the Los Angeles Dodgers for a scintillating 2-1 victory Wednesday night.

Starling Marte hit a two-run home run off All-Star lefty Tyler Anderson (13-3) as the Mets evened the three-game showdown between the top two teams in the National League.

Mookie Betts connected off deGrom (4-1) for his 32nd home run, but it wasn't enough for the Dodgers in a tight pitching duel with a playoff feel that took only 2 hours, 19 minutes.

Making his sixth start of the season after returning from injury, deGrom hit 102 mph on the radar gun and struck out nine in seven innings. He allowed three hits and walked one.

The two-time Cy Young Award winner was nursing a 2-1 lead when ex-Met Justin Turner sent a drive to deep center in the seventh.

Knowing it might tie the game, deGrom turned around and went into a worried crouch on the mound. Nimmo, however, raced back and plucked the ball right off the top of the wall to rob Turner of a home run with a sensational leaping grab.

A fired-up Nimmo landed on his feet, pumped his fist hard and screamed in excitement as deGrom held both arms high.

BREWERS 6, PIRATES 1 Keston Hiura and Luis Urias each hit an RBI single during Milwaukee's four-run seventh inning, and the Brewers beat Pittsburgh. Willy Adames had a run-scoring double as Milwaukee won for the fourth time in five games. Freddy Peralta pitched five effective innings, and Taylor Rogers (3-6) got four outs for the win.

CARDINALS 5, REDS 3 (13) Albert Pujols broke a tie with a sacrifice fly in the 13th inning and Lars Nootbaar connected on a two-run home run later in the inning to give St. Louis a victory over Cincinnati.

ASTROS 5, RANGERS 3 Jose Altuve drove in two runs and scored two more for AL-best Houston in a win over Texas. The reigning AL champion Astros will enter September at 84-47, matching their best record through 131 games. The Rangers' Marcus Semien had a steal for his first career 20-20 season.

ORIOLES 4, GUARDIANS 0 Gunnar Henderson homered in his major league debut, losing his batting helmet after connecting on a drive that traveled an estimated 429 feet, and Baltimore beat Cleveland.

RAYS 2, MARLINS 1 (10) Manuel Margot singled in the go-ahead run in the top of the 10th inning and prevented a run by tracking down a flyball to deep center in the bottom half, leading Tampa Bay past Miami. The Marlins intentionally walked Yandy Diaz before Margot's line-drive single to right field drove in automatic runner Yu Chang from second. 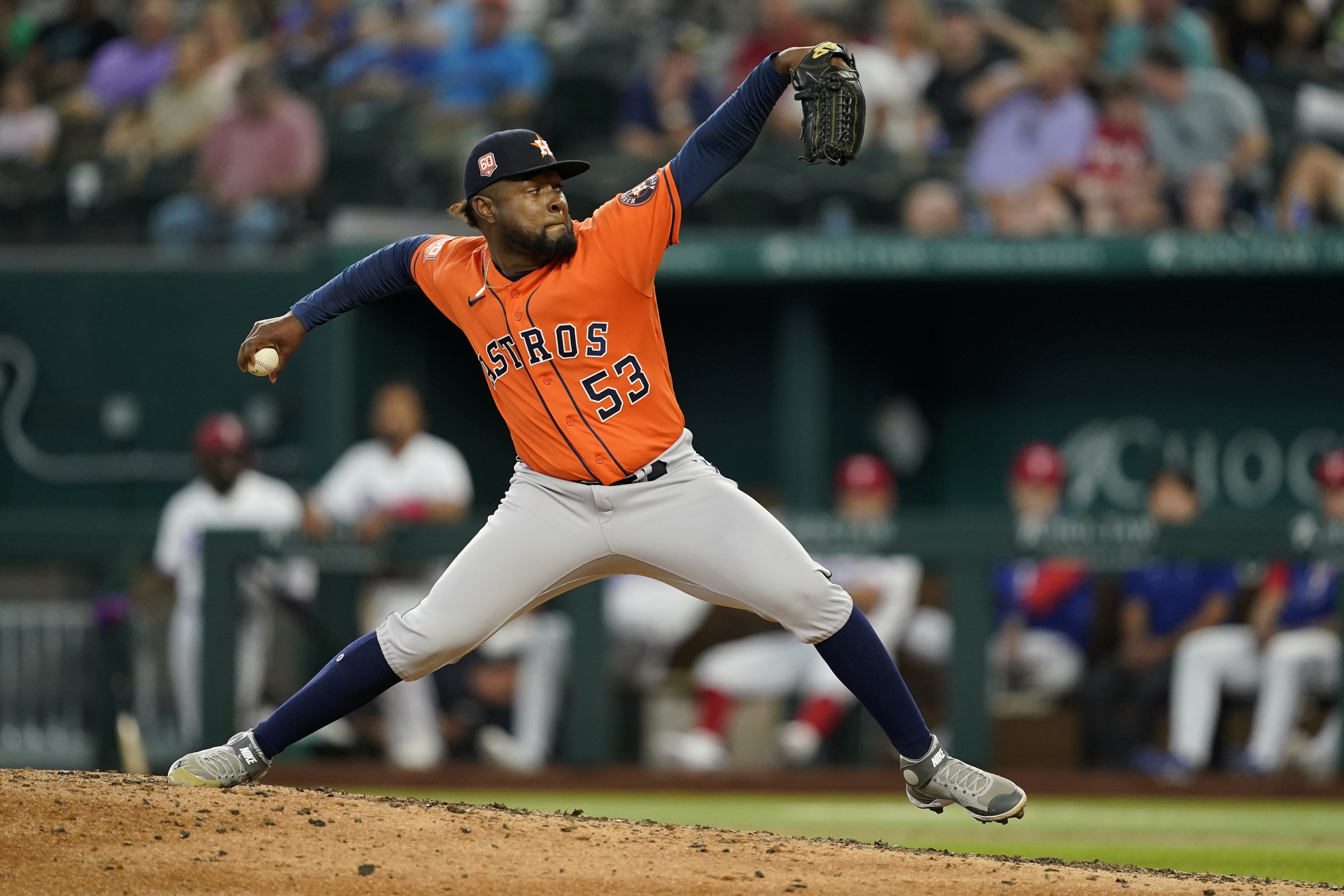 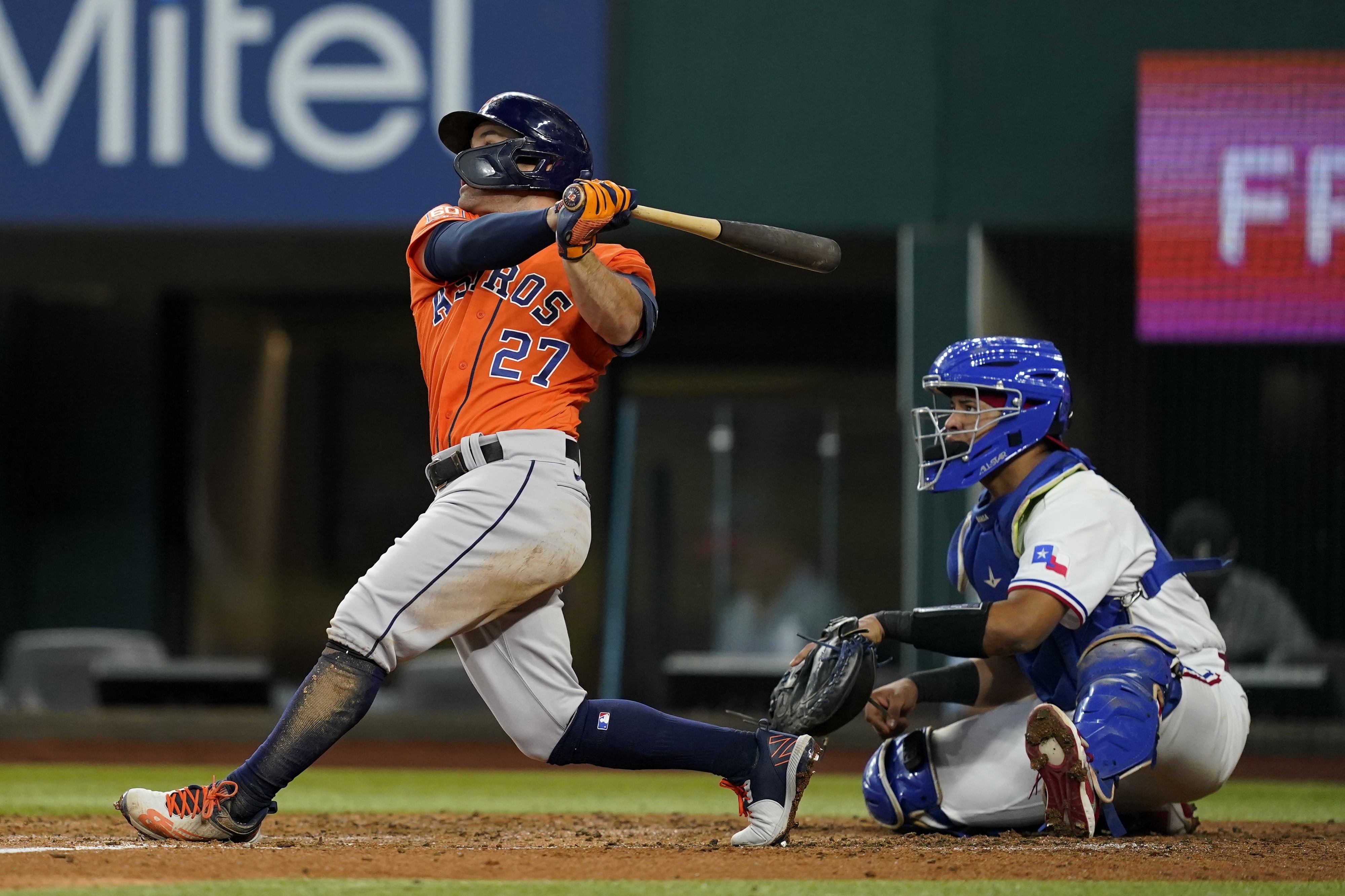 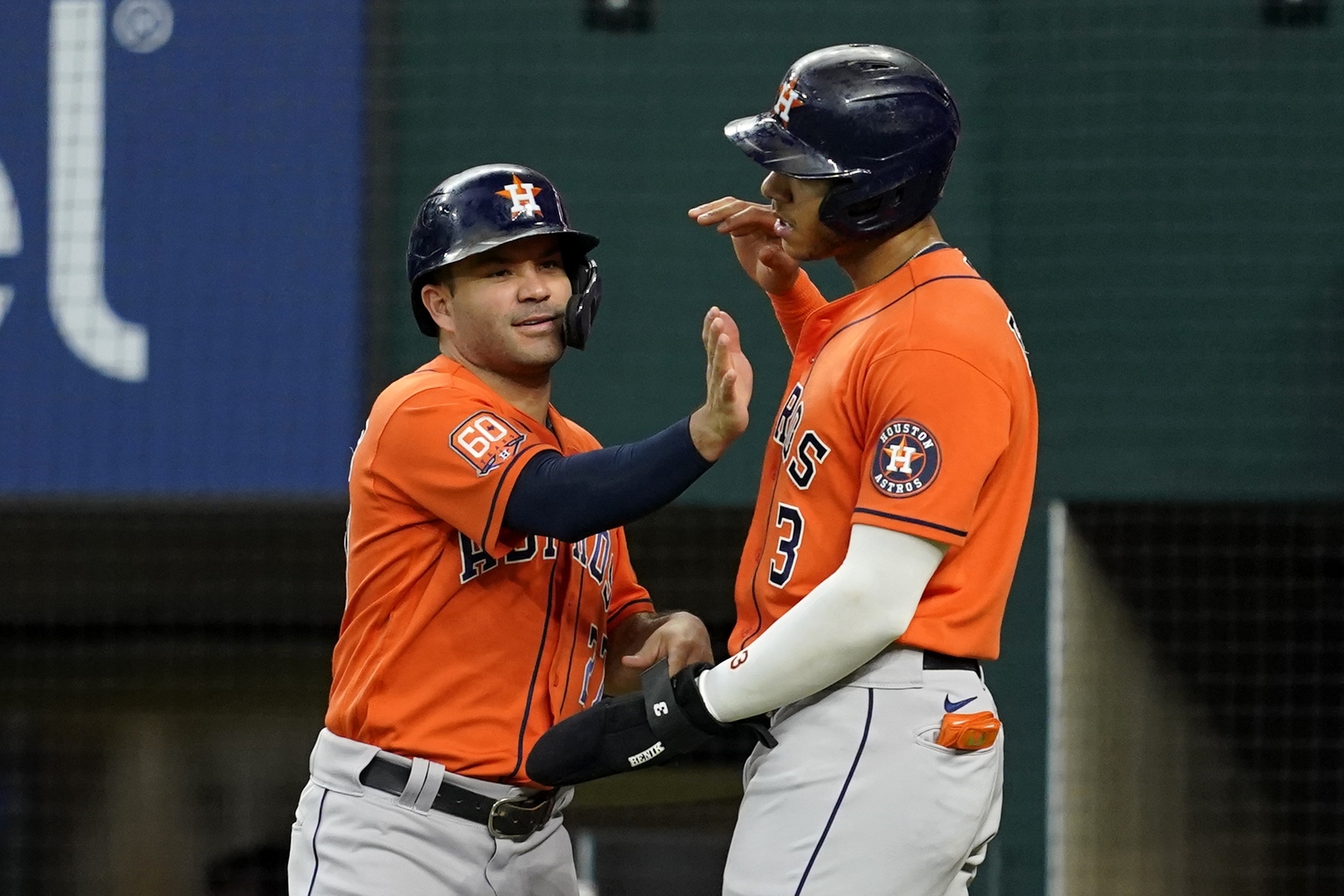 Houston Astros' Jose Altuve and Jeremy Pena (3) celebrate after the duo scored on a Kyle Tucker single in the fourth inning of a baseball game against the Texas Rangers in Arlington, Texas, Wednesday, Aug. 31, 2022. (AP Photo/Tony Gutierrez)