Tempered remarks contrast with reversal of reform policies by Compiled by Democrat-Gazette staff from wire reports | September 1, 2022 at 4:00 a.m. 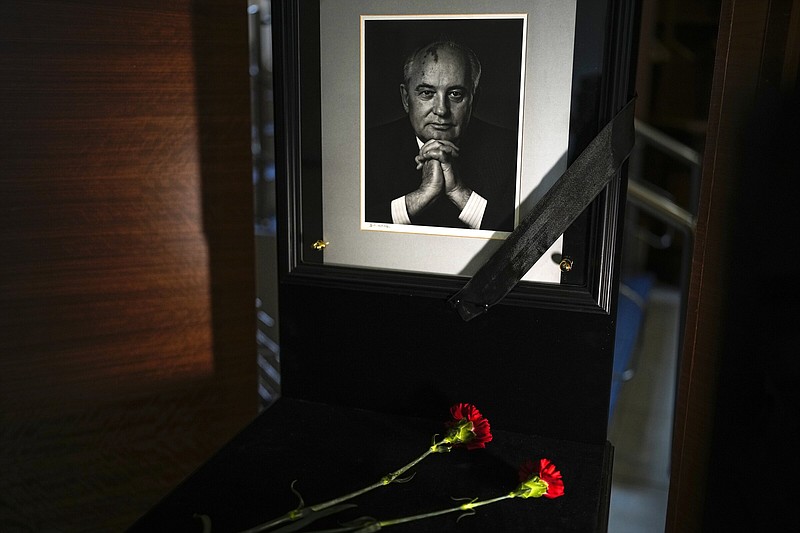 A portrait of former Soviet President Mikhail Gorbachev and flowers are placed at his foundation’s headquarters Wednesday, a day after his death, in Moscow, Russia. (AP/Alexander Zemlianichenko)

President Vladimir Putin of Russia on Wednesday called Mikhail Gorbachev "a politician and statesman who had a huge impact on the course of world history," offering a conciliatory message about the last Soviet leader, whose legacy of openness he has spent his years in power trying to reverse.

In a brief condolence telegram to Gorbachev's family published by the Kremlin the day after his death, the Russian leader said that Gorbachev "led our country during a period of complex, dramatic changes," and offered his "sincere words of sympathy and support."

Putin's first public comments on Gorbachev's death were a sharp contrast with his policies, which have sought to undo much of his predecessor's legacy of more personal and political freedoms. Putin has also called the end of the Soviet Union -- which Gorbachev presided over -- the "greatest geopolitical catastrophe of the century," and is now waging a war in Ukraine to recapture what he sees as lost Russian lands, a war whose possibility Gorbachev once dismissed as "absurd."

Gorbachev "deeply understood that reforms were necessary, he strove to offer his own solutions to urgent problems," said Putin, who noted "the great humanitarian, charitable and educational work" of Gorbachev's wife, Raisa.

The condolence note allowed Putin to appear as a statesman above the political fray, but it quickly became clear that Gorbachev would not be venerated by the Kremlin. Dmitry Peskov, the Kremlin's spokesperson, said that the format of Gorbachev's funeral -- such as whether it would receive state honors -- had yet to be determined, and would depend on his family's wishes, according to the Interfax news agency.

By contrast, on the day in 2007 when Gorbachev's successor, Boris Yeltsin, died, Putin, who succeeded him, declared a day of national mourning on his funeral. The ceremony was broadcast live on state television and the lowering of Yeltsin's coffin was accompanied by an artillery salute.

On Wednesday, Gorbachev's daughter, Irina, told the Interfax news agency that her father's funeral ceremony would take place Saturday, in the grand hall of Moscow's House of the Unions.

Flanked by white Corinthian columns, the grand hall has been the site of many high-profile ceremonies, including the funerals of Vladimir Lenin, Josef Stalin and other Soviet leaders. Gorbachev will be buried next to his wife at the Novodevichy Cemetery in Moscow, his daughter said.

Peskov said that the Kremlin was not sure whether Putin would attend the ceremony. In comments reported by Interfax, Peskov was more forthright than Putin about Gorbachev, calling him "an extraordinary and unique person" while also labeling him a "romantic" who naively believed that a post-Soviet Russia could be friends with the West.

Since his early days in the Kremlin, Putin has worked hard to undo Gorbachev's signature policies such as glasnost, meaning openness and transparency of government and free discussion of its work.

However, Putin has been careful never to condemn Gorbachev's legacy in full, arguing that he had to preside over a Soviet system that could not be fixed. For his part, Gorbachev, too, never criticized Putin to an extent that questioned his legitimacy as Russia's ruler.

U.S. President Joe Biden praised Gorbachev for being open to democratic changes. Gorbachev won the 1990 Nobel Peace Prize for his role in ending the Cold War.

"After decades of brutal political repression, he embraced democratic reforms. He believed in glasnost and perestroika -- openness and restructuring -- not as mere slogans, but as the path forward for the people of the Soviet Union after so many years of isolation and deprivation," Biden said.

Biden added that "these were the acts of a rare leader -- one with the imagination to see that a different future was possible and the courage to risk his entire career to achieve it. The result was a safer world and greater freedom for millions of people."

Reactions from Russian officials and lawmakers were mixed. They applauded Gorbachev for his part in ending the Cold War but censured him for the collapse of the Soviet Union.

Oleg Morozov, a member of the main Kremlin party, United Russia, said Gorbachev should have "repented" for mistakes that went against Russia's interests.

"He was a willing or an unwilling co-author of the unfair world order that our soldiers are now fighting on the battlefield," Morozov said, in a reference to Russia's current war in Ukraine.

Lech Walesa, the leader of Poland's pro-democracy Solidarity movement in the 1980s and the country's president from 1990-1995, had a more nuanced view of Gorbachev. He said he "admired, even liked him, but did not understand [him]."

"He believed to the last that communism could be reformed, but I, on the contrary, did not believe it was possible," Walesa told the Wirtualna Polska media.

Walesa added: "He knew that the Soviet Union could not last much longer and he was doing everything he could to prevent the world from bringing Russia to account for communism. And he was successful there."

World leaders paid tribute to a man some described as a great and brave leader.

In Germany, where Gorbachev is considered one of the fathers of the country's reunification in 1990 and is popularly referred to as "Gorbi," former Chancellor Angela Merkel saluted him as "a unique world politician."

"Gorbachev wrote world history. He exemplified how a single statesman can change the world for the better," she said, recalling how she had feared that Russian tanks might roll into East Germany, where she lived, as the Berlin Wall fell in 1989.

In Asia, Gorbachev was remembered as a leader with the courage to bring change.

China recognized Gorbachev's role in healing relations between Moscow and Beijing. Gorbachev had been an inspiration to reformist thinkers in China during the late 1980s, and his visit to Beijing in 1989 marked a watershed in relations between the sides.

"Mr. Gorbachev made positive contributions to the normalization of relations between China and the Soviet Union. We mourn his passing and extend our sympathies to his family," Foreign Ministry spokesperson Zhao Lijian said.

However, China's Communist Party leaders also regard Gorbachev's liberal approach as a fatal display of weakness and his moves toward peaceful coexistence with the West as a form of surrender.

Information for this article was contributed by Ivan Nechepurenko and Anton Troianovski of The New York Times and by Kirsten Grieshaber, Patrick Quinn of The Associated Press.