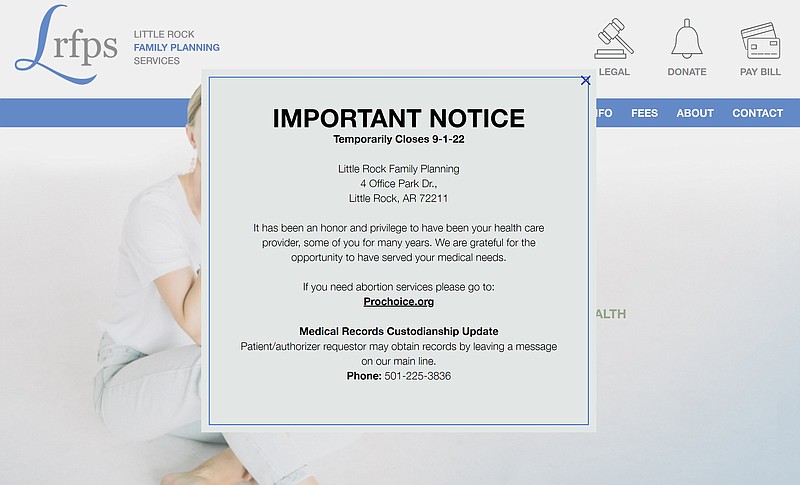 According to the clinic's website, it opened in 1973 and moved in 1997 to its most recent location in west Little Rock.

"It has been an honor and privilege to have been your health care provider, some of you for many years," according to the website message. "We are grateful for the opportunity to have served your medical needs."

The message included the main telephone number -- (501) 225-3836 -- which patients can call if they need referrals or to obtain their medical records.

Abortion became illegal in Arkansas on June 24 when the U.S. Supreme Court overruled Roe v. Wade with its decision in Dobbs v. Jackson Women's Health Organization. The Supreme Court decision triggered an Arkansas law banning abortion except when it's necessary to save the life of the mother in a medical emergency.

"Little Rock Family Planing Services is no longer able to provide abortion services," according to an outgoing message at the above telephone number. "If you are in need of an abortion, you can go to Prochoice.org. The website has a map of providers who are still providing abortions."

A message left on voicemail at the clinic wasn't returned Thursday.

"Little Rock Family Planning Services ceased providing abortion care the day the Dobbs decision was issued by the Supreme Court," said Holly Dickson, executive director of the American Civil Liberties Union of Arkansas. "This was to be expected with Arkansas politicians who swore an oath to protect our rights [but] instead eviscerated fundamental, established rights to make our own medical decisions, our rights to privacy, and self-governance. The problems created are not academic; the acts of Arkansas politicians have caused suffering and deadly consequences for Arkansans."

Dickson said Arkansans can contact the Arkansas Abortion Support Network as well as www.abortionfinder.org to find access to care. She said the closest states providing abortions are Kansas and Illinois.

"And all Arkansans should ensure their voter registration status is current and vote against politicians who threaten the rights of any Arkansan," said Dickson.

Planned Parenthood Great Plains had an abortion clinic in Fayetteville, but it closed in 2019, said Anamarie Rebori-Simmons, a spokeswoman.

"Planned Parenthood Great Plains chose to leave its Fayetteville location in 2019 due to challenges that posed concerns for the safety of its patients and staff," according to a news release last year announcing that it had opened the Rogers Health Center in Benton County.

"We're very much so open and providing other healthcare needs," she said.