PREP FOOTBALL: Greenwood freshman steps up in a huge way 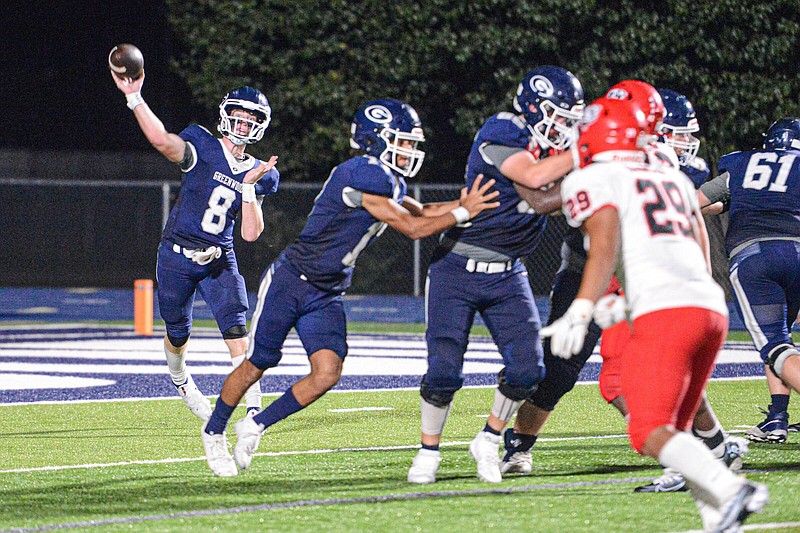 Greenwood quarterback Kane Archer (left) threw a 45-yard touchdown pass to Grant Karnes on the last play of the game to lead the Bulldogs to a come-from-behind 56-53 victory over Fort Smith Northside on Friday night. The Bulldogs trailed 53-35 with 4:00 left in the fourth quarter. (NWA Democrat-Gazette/Hank Layton)

Trailing by three scores with less than a quarter to play is a bad situation to be in as a football coach.

With your starting quarterback on the sideline injured? A nightmare.

But when your backup has as many Division I scholarship offers as he does fingers to count them on, you've got a fighting chance.

That's the situation Greenwood found itself in Friday night at home facing Fort Smith Northside (1-1). The Bulldogs (1-1) trailed 46-28 with 3:51 remaining and the ball at Northside's 22.

Senior quarterback Hunter Houston injured his hip late in the second quarter. He later returned, but took another hit that ended his night before halftime.

Greenwood Coach Chris Young turned to backup Kane Archer -- a freshman with as much hype surrounding him as any player in the state.

Archer led touchdowns drives ending at 3:07 and 15 seconds remaining to bring the Bulldogs within three points. Then, with three seconds to play, he found sophomore receiver Grant Karnes for the winning touchdown to complete the improbable comeback less than two hours after his first varsity snap.

For his play Friday, Archer was named the Arkansas Democrat-Gazette Player of the Week.

"Kane comes in in an incredibly tough situation ... but the kid's a competitor and he just has a knack for making plays," Young said. "He's fun to watch. He's going to be a heck of a player down the road."

"You're always one play away, and that's what I appreciated about Kane," Young said. "He prepares like he's the guy, he wants to be the guy and he's not afraid. There's not many ninth-graders that could come into that atmosphere, in a packed stadium, playing Northside High School and are going to produce on the level that he did. It's just a testament to him."

Young said he is still awaiting the status of Houston's injury to determine if he will slot back in as the Bulldogs' starter. But it's safe to say if he has to turn to Archer once again, he has confidence in his backup.

"The whole reason we moved him up was so that he could be in our offense for a year, learn our terminology on how we do things, be with our quarterback coach and so that he could be a three-year starter for us," Young said. 'He's getting invaluable experience. The goal is that he gets [second string] reps this year and is available like [Friday] night when we need him."

Archer may have just made his varsity debut, but his name has been known well before Friday. He currently holds 10 Division I scholarship offers, including ones from Arkansas, Michigan and Texas A&M, and he is routinely ranked among the top players in the 2026 class.

Print Headline: Freshman steps up in a huge way