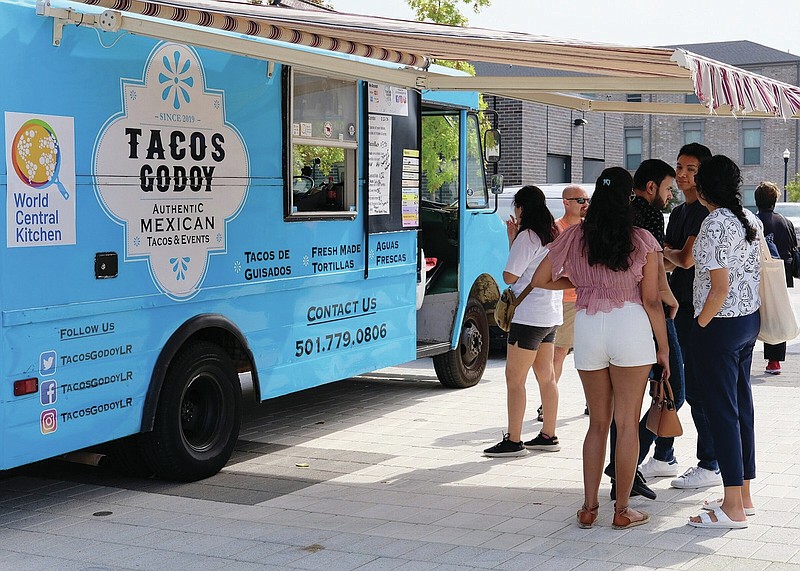 Tacos Godoy will be one of 60 food trucks on hand for the 11th Main Street Food Truck Festival on Sunday. (Special to the Democrat-Gazette)

The festival has actually scaled back a bit for 2022, as nothing will spill over onto Capitol Avenue as in years past.

Downtown Little Rock Partnership Executive Director Gabe Holmstrom says that means the number of food trucks is also down this year, by design. 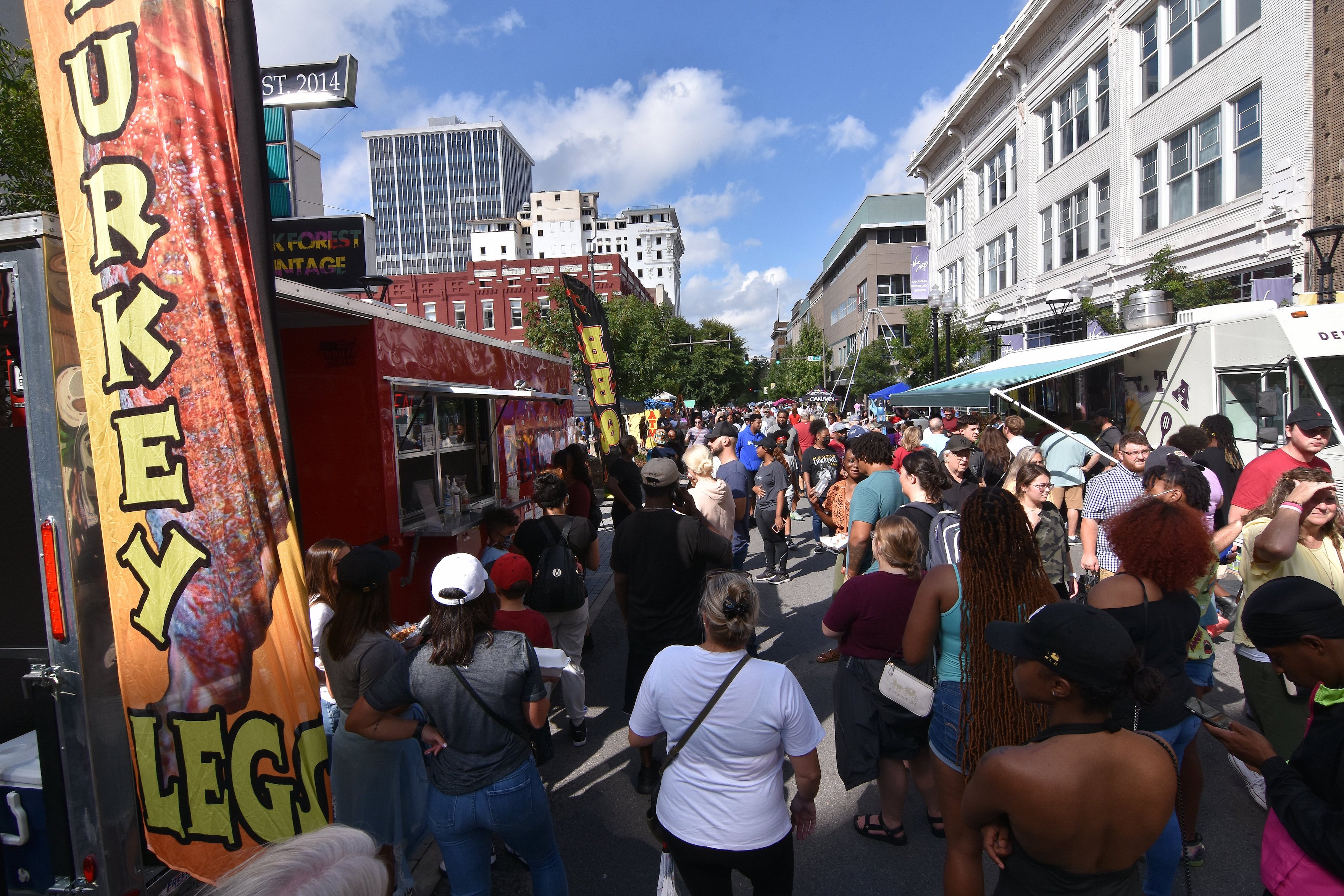 As many as 50,000 “feeders” have flocked to past Food Truck Festivals. This year's footprint will be a little smaller. (Democrat-Gazette file photo/Staci Vandagriff)  "We shrank the footprint" of the festival, he explains, to just the six blocks of Main Street. "So we couldn't allow all the trucks that wanted to participate" to show up.

That required that Becky Barnes Campbell, who chaired the 2021 festival and whom Holmstrom tasked this year with putting the festival together, do a little "jurying " on just which trucks would be on the street come Sunday. "We can't have just 60 barbecue trucks," Holmstrom explains. 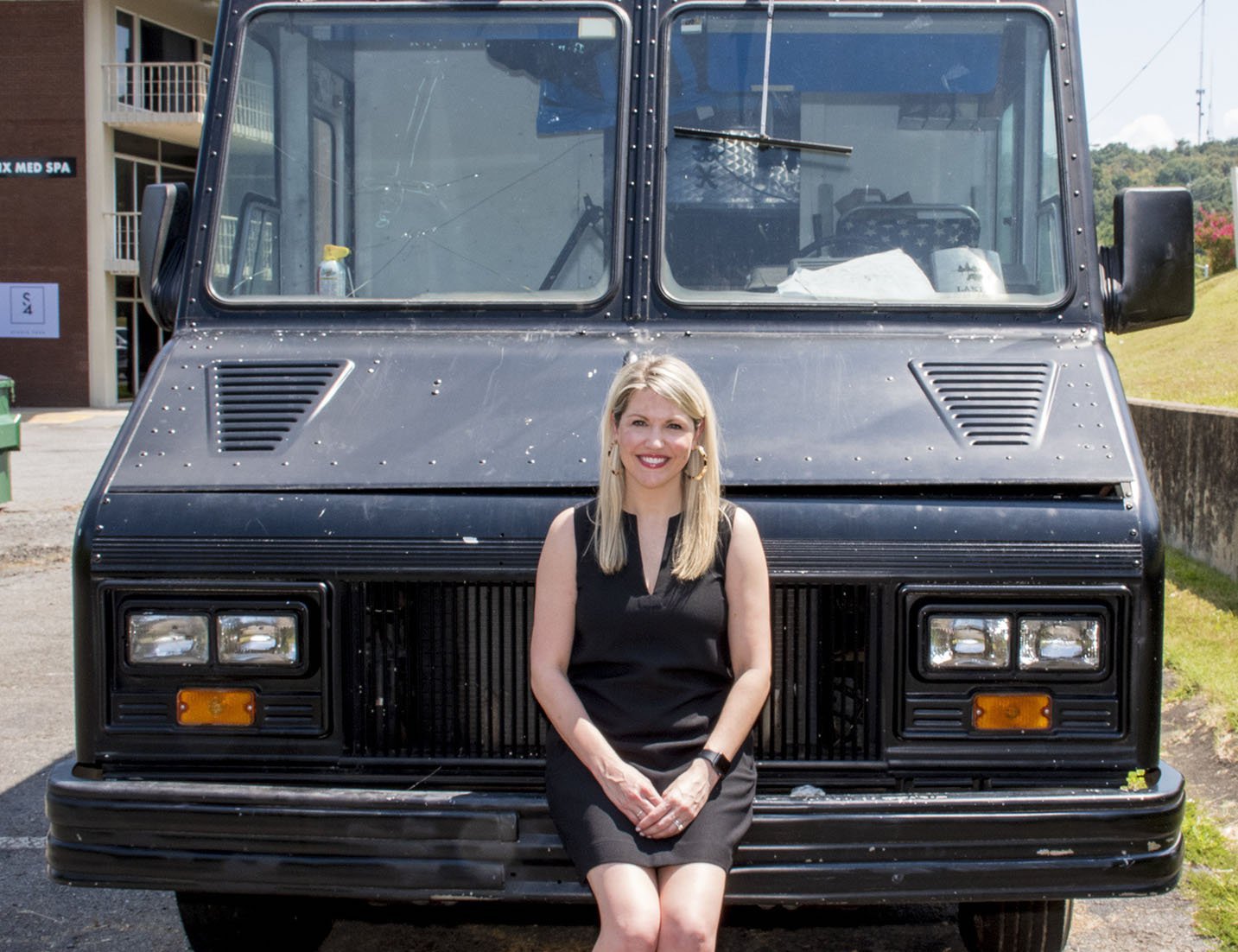 Becky Barnes Campbell, 2021 festival chairwoman, helped put this year's festival together. (Democrat-Gazette file photo/Cary Jenkins)  Most of the trucks come from Central Arkansas; a few travel some distance to take part. For example, four of the trucks are coming from Tennessee — Smurfey's Smokehouse, Comida Rapida Mr. Casas and Just Wraps Food Truck, all from Memphis, and Fresh Gulf Shrimp from Oakland, Calif. Island Noodles, which has been part of the lineup for a couple of years, is coming from Forest City, N.C.

Campbell says there's a long waiting list of trucks that didn't make the cut. However, should, as sometimes happens, a food truck on the made-it list doesn't show up, "we'll be filling that slot with something else," she says, not with another food truck. And, "The remaining trucks will be able to capitalize on that," she notes.

Holmstrom is hoping, of course, for "beautiful, fall Arkansas weather" for the festival, but that is probably the exception rather than the rule — in some years it has been hideously hot; last year, it rained for much of the day. "It may rain, but people still come out," he says, though he concedes it may have resulted in a somewhat smaller crowd. But for attendees, that was more of a bonus than a burden. 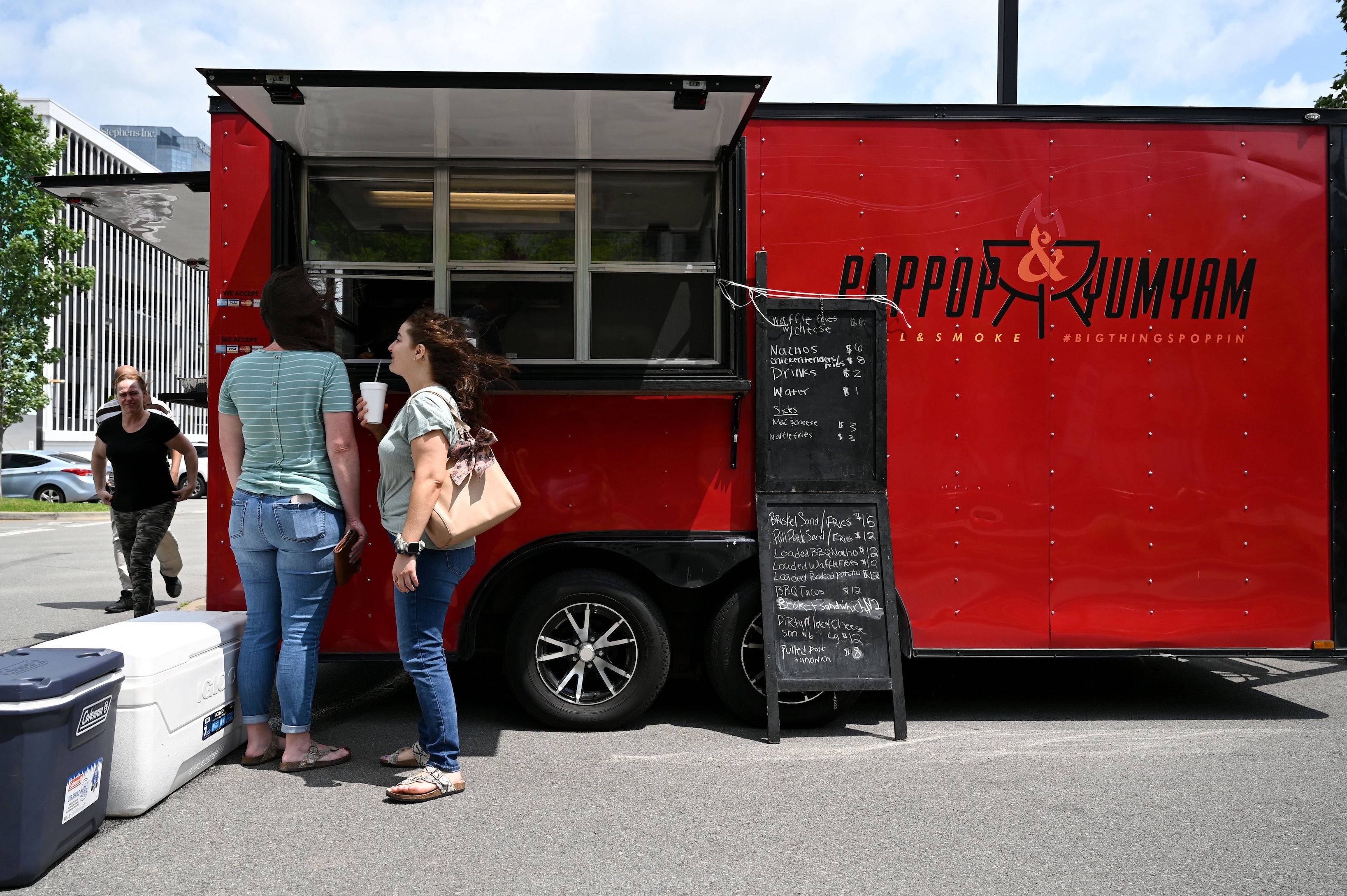 Pop Pop Yum Yam will be one of 60 food trucks on hand for the 11th Main Street Food Truck Festival on Sunday. (Democrat-Gazette file photo/Stephen Swofford)  The festival goes on rain or shine, but Holmstrom holds out the option of a "game-time" postponement in case of weather-related catastrophe — tornado warnings, perhaps, or, as when in 2012 the remnants of Hurricane Gordon forced the push-back of the festival for a day, from Saturday to Sunday. (That wouldn't be practical this year, since the festival is already on a Sunday.)

As in some past years, the Downtown Partnership is encouraging food truck owners to provide a $6 "sample" item in addition to, or as part of, its festival menu. That way, visitors will be better able to visit several different trucks and taste a variety of possibilities instead of having to spend a limited budget (that'll include almost everybody) on one large meal.

This year, the Downtown Partnership teamed up with AY Magazine on a pre-festival promotion that involved getting folks to vote for a People's Choice Award. The winner: Juice Me Up Cafe from Lonoke.

Campbell says in its biggest years, the event has drawn 50,000 hungry fans. So that first-time attendees aren't overwhelmed by the choice of fare or the size of the crowd, she advises, "Come early. Come get a parking spot at one of the many parking decks or lots that downtown has to offer, and any metered parking is free. But get here early and you won't have the crowd you will have at 4 o'clock, and you'll have first choice of all of these amazing food trucks." 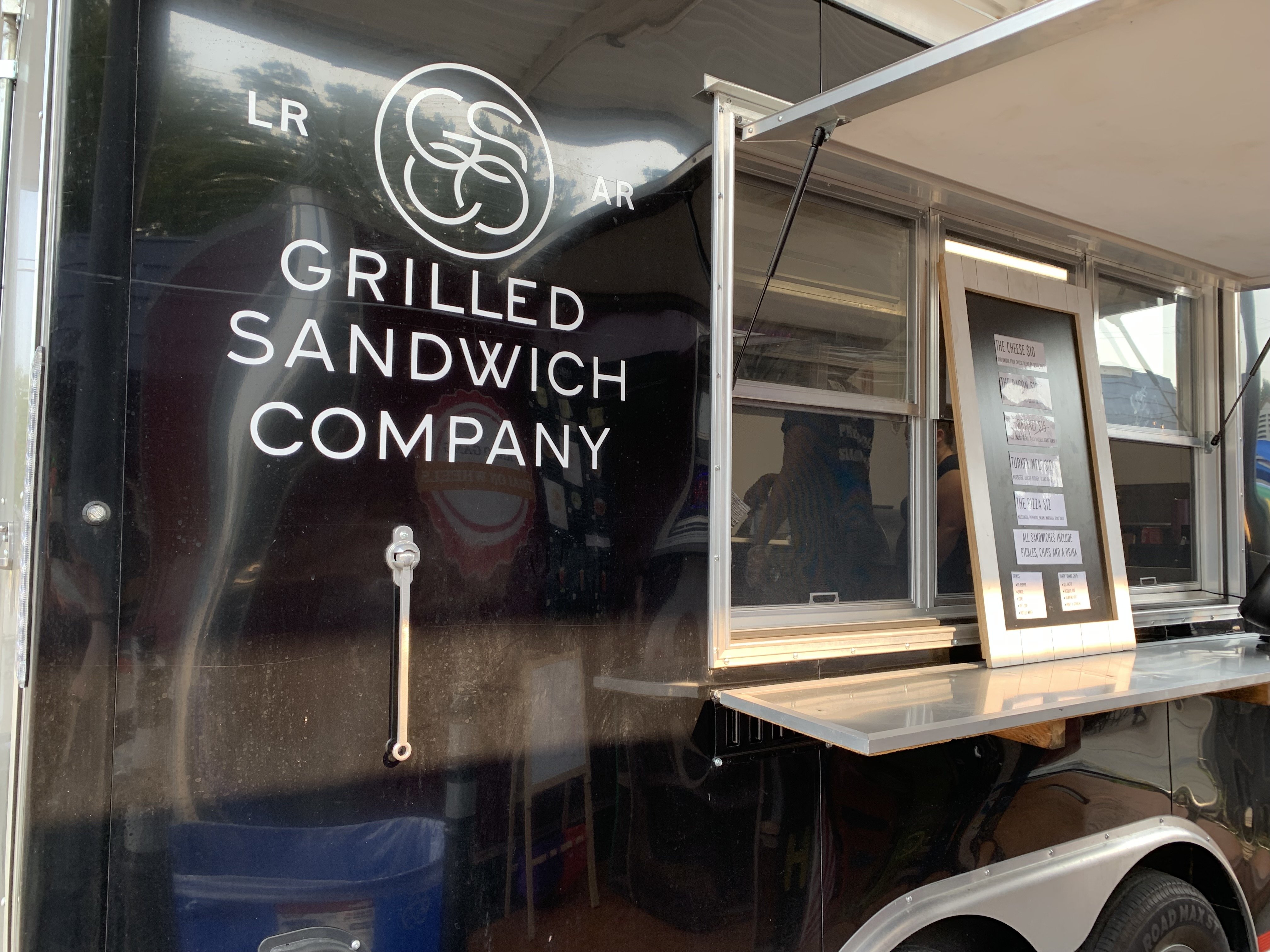 Little Rock-based Grilled Sandwich Company will be one of 60 food trucks on hand for the 11th Main Street Food Truck Festival on Sunday. (Democrat-Gazette file photo/Eric E. Harrison)  Holmstrom says the Downtown Partnership, which according to a news release uses the festival and its proceeds "to raise awareness of downtown Little Rock and attract businesses, residents and visitors," hears two perennial complaints: from vendors, that there are too many trucks, and from visitors, that the lines are too long.

"If you can figure those out, you can be the chairman of the festival next year," he says.