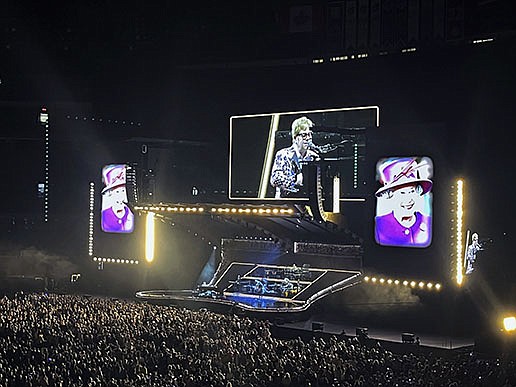 Elton John paid tribute Thursday night to Queen Elizabeth II at his final concert in Toronto, saying she inspired him and is sad she is gone. “She led the country through some of our greatest and darkest moments with grace and decency and genuine caring,” he said. More photos at arkansasonline.com/910elizabeth/. (AP/Robert Gillies)

CAPE TOWN, South Africa -- Across the globe, tributes to Queen Elizabeth II's life have poured in, from world leaders to rock stars to ordinary people -- along with some criticism of the monarchy.

The queen's death prompted reflections on the historic sweep of her reign and how she succeeded in presiding over the end of Britain's colonial empire and embracing the independence of her former dominions.

Marking her 21st birthday in 1947, the then-Princess Elizabeth pledged in Cape Town that her "whole life, whether it be long or short, shall be devoted to your service and the service of our great imperial family to which we all belong."

The British empire soon crumbled, but Elizabeth managed to maintain a regal -- if ceremonial -- position as the head of the Commonwealth, the 54 nations of mostly previous British colonies.

"The Queen lived a long and consequential life, fulfilling her pledge to serve until her very last breath at the age of 96," Cape Town Mayor Geordin Hill-Lewis, said Friday. "She was an exemplary leader of the kind seldom seen in the modern era."

As queen, Elizabeth was seen as endorsing the birth of democracies in former colonies in Africa where Black citizens previously had been denied basic rights, including the vote.

When in tiaras, she danced with new African leaders in the 1960s and visited their capitals. She also burnished their new institutions.

When white-minority rule fell in South Africa in 1994, Elizabeth welcomed Nelson Mandela as a world leader. Her friendship with Mandela gave her a new relevance.

"In the years after his release from prison, [Mandela] cultivated a close relationship with the queen," the Nelson Mandela Foundation said Friday. "For Madiba [Mandela's clan name], it was important that the former colonial power in southern Africa should be drawn into cordial and productive relations with the newly democratic republic of South Africa."

"Although ensconced in the pomp, ceremony and lifestyle of royalty and empire, in a world of profound inequality, she was a servant queen," Tutu's foundation and trust said Friday.

In contrast, a scathing view of the queen's rule was issued by South Africa's populist party, the Economic Freedom Fighters. The queen was "head of an institution built up, sustained, and living off a brutal legacy of dehumanization of millions of people across the world," it stated.

"We do not mourn the death of Elizabeth, because to us her death is a reminder of a very tragic period in this country and Africa's history," the party's statement read. "During her 70-year reign as queen, she never once acknowledged the atrocities that her family inflicted on native people that Britain invaded across the world. She willingly benefited from the wealth that was attained from the exploitation and murder of millions of people."

Some Irish soccer fans cheered the queen's death at a match Thursday, according to videos posted online that angered her supporters. The Republic of Ireland's leadership expressed condolences and admiration for the queen.

The widespread tributes that followed her death came not only from U.S. President Joe Biden but also from Russian President Vladimir Putin.

She was a "stateswoman of unmatched dignity and constancy who deepened the bedrock alliance between the United Kingdom and the United States," Biden and first lady Jill Biden said, adding that she "defined an era."

"For many decades, Elizabeth II rightfully enjoyed the love and respect of her subjects, as well as authority on the world stage. I wish you courage and perseverance in the face of this heavy, irreparable loss," Putin wrote.

Elizabeth was mourned across Europe. In France, Britain's historic rival and contemporary ally, flags at the presidential palace and public buildings were lowered to half-staff Friday.

French President Emmanuel Macron released a video Friday in English expressing a sense of "emptiness" after her passing. Addressing the British public, he said: "To you, she was your Queen. To us, she was the queen to all of us."

In the U.S., tributes came from every living former president.

Barack Obama and his wife, Michelle, said Elizabeth made "the role of queen her own -- with a reign defined by grace, elegance and a tireless work ethic." George W. Bush called her "a woman of great intellect, charm and wit," and Jimmy Carter said Elizabeth's "dignity, graciousness and sense of duty" were inspiring.

Even in places where the relationship with British monarchy is complicated, the tributes flowed.

In India, once a British colony, Prime Minister Narendra Modi called Elizabeth "a stalwart of our times."

The queen's death came as a growing number of British territories in the Caribbean are seeking to replace the monarch with their own heads of state amid demands that Britain apologize for its colonial-era abuses and award its former colonies slavery reparations. Still, Caribbean leaders mourned her.

"Undoubtedly, she formed a special bond with the people of Jamaica," he said. "We are saddened that we will not see her light again, but we will remember her historic reign."

Bermuda Premier David Burt noted that her reign "has spanned decades of such immense change for the United Kingdom and the world."

Elizabeth was also sovereign to 14 other countries including Jamaica, Canada, Australia, the Solomon Islands and New Zealand.

"Here is a woman who gave her life, utterly, to the service of others. And regardless of what anyone thinks of the role of monarchies around the world, there is undeniably, I think here, a display of someone who gave everything on behalf of her people," New Zealand Prime Minister Jacinda Ardern said.

In Canada, Prime Minister Justin Trudeau said he was having trouble believing he'd had his last sit-down chat with Elizabeth, who visited Canada 22 times as monarch.

"I will so miss those chats," he said. "For most Canadians, we have known no other sovereign."

He said she was a "constant presence in our lives and her service to Canadians will forever remain an important part of our country's history."

Former Australian Prime Minister Malcolm Turnbull, who led a failed campaign to have an Australian president replace the British monarch as Australia's head of state, came close to tears in paying tribute to Elizabeth.

"It's the end of an era and let's hope that the future, after the queen's passing, is one where we will have leadership as dedicated and selfless as she has shown," Turnbull told the Australian Broadcasting Corp.

In China, Elizabeth's death was a top trending topic on social media.

"I feel quite sad," said Bao Huifang, a lawyer in Beijing. "She played a very important role in stabilizing Britain and the world."

Xi said he was willing to work with King Charles III on promoting "healthy and stable" bilateral ties.

Rock star Elton John paid tribute at his Toronto concert, saying he was inspired by her and is sad she died.

"She led the country through some of our greatest and darkest moments with grace and decency and genuine caring," John said.

Information for this article was contributed by Mogomotsi Magome, Robert Gillies and Nick Perry of The Associated Press. 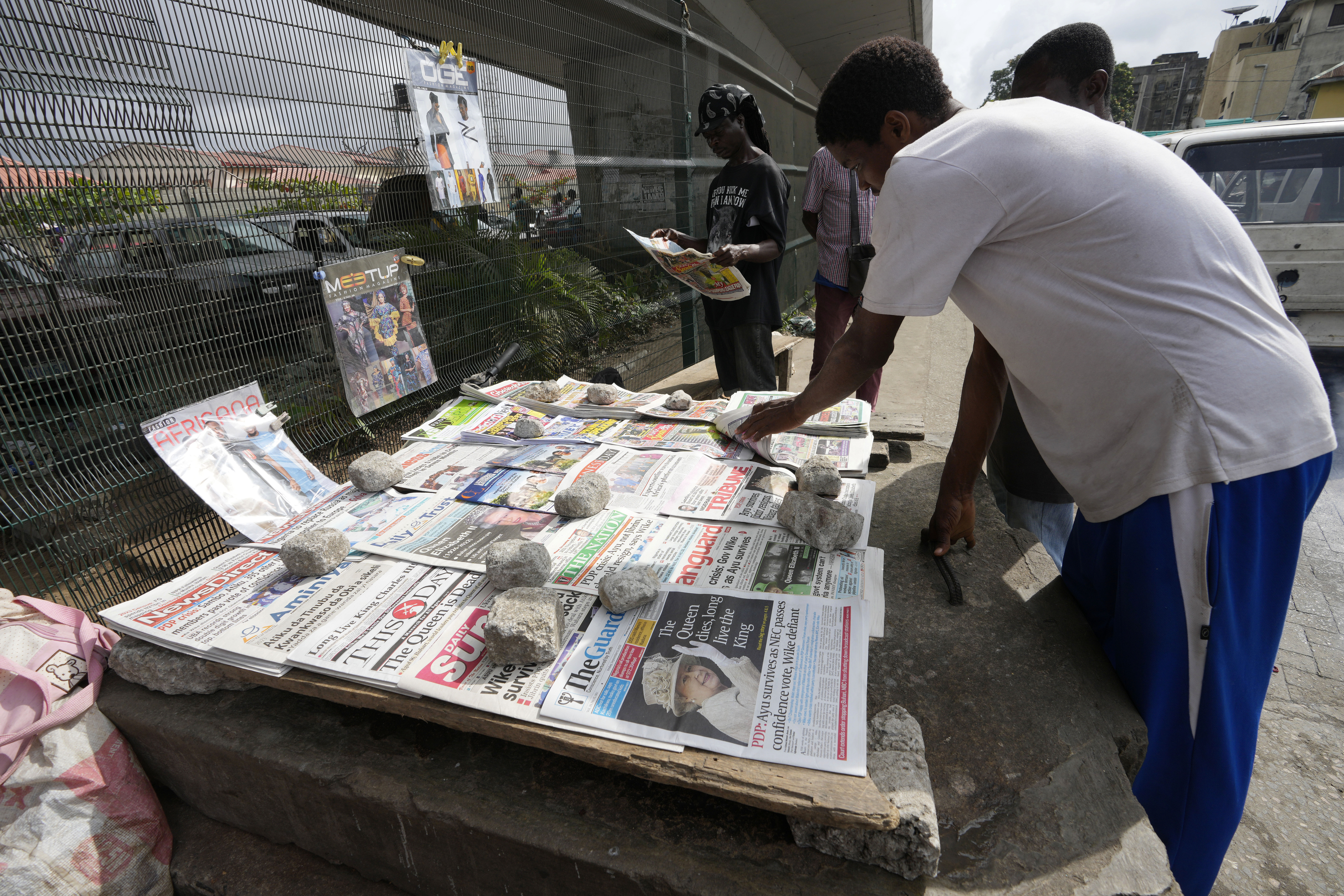 Newspapers announce the death of Queen Elizabeth II at a newsstand Friday in Obalende Lagos, Nigeria. Her death was met with mixed feelings in Africa, Ireland and elsewhere. (AP/Sunday Alamba)