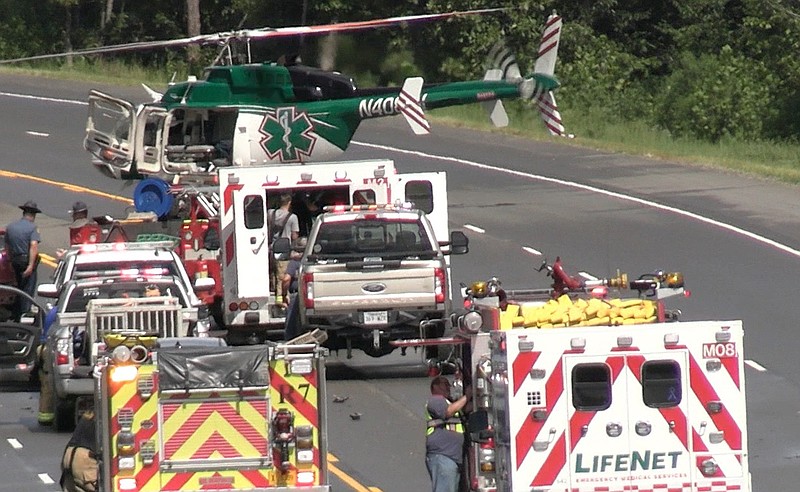 All four travel lanes of U.S. Highway 70 east were shut down Saturday afternoon after a multi-vehicle wreck involving "multiple fatalities" that occurred at around 2:15 p.m. about 2.2 miles east of the King Expressway. - Photo by Lance Porter of The Sentinel-Record

Four people are dead and one person is injured after a crash near Hot Springs on Saturday afternoon, according to authorities.

A 43-year-old man from Glenwood was driving a 2020 Hyundai east on U.S. 70 when the vehicle swerved into the westbound lane around 2:30 p.m., according to a report from Arkansas State Police.

The report states 67-year-old Linda Godwin of Royal swerved the 2009 Hyundai she was driving to avoid the oncoming vehicle. This caused her Hyundai to hit another vehicle that was traveling west beside her. That vehicle, a 2015 Chevrolet, veered off the highway to the south.

Authorities said the crash killed Godwin, as well as two other passengers in the vehicle: an unidentified minor and 35-year-old Rebekah Schaffer of Royal.

A passenger in the 2020 Hyundai, 57-year-old Julieanna Gonzalez of Glenwood, also died, according to the report.

The injured driver of the first vehicle was taken to UAMS Medical Center to be treated, according to the report.

Troopers said that conditions were rainy and cloudy at the time of the wreck.

The crash is the first in September reported to have killed multiple people on highways in Arkansas, according to information available from the state Department of Public Safety.

Over 400 people have died in car crashes on state highways so far this year, and at least 15 have been killed in September, according to preliminary crash reports.