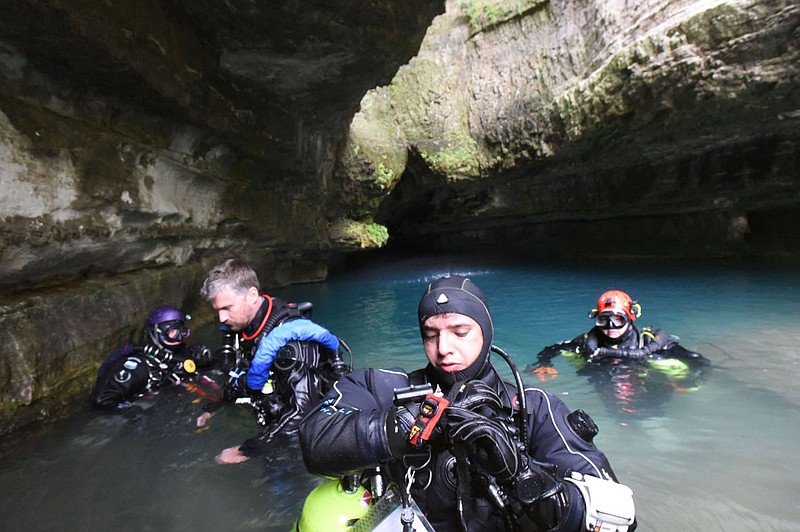 Divers, including marine biologist Fernando Calderon (center) of Galveston, Texas, get ready on Aug. 20 2022 to dive deep into Roaring River Spring. A team from KISS Rebreathers, based in Fort Smith, has three more exploration dives scheduled this year.

CASSVILLE, Mo. -- Scores of visitors admire the beautiful flow of turquoise water that emerges from Roaring River Spring at the heart of Roaring River State Park cradled in an Ozarks canyon south of Cassville, Mo.

From a sidewalk at the spring's outflow, it's easy to tell the clear water comes from deep in the Earth, but how deep? That's one fact a team of highly trained cave divers hopes to find out during extremely deep dives into the spring's dark, mysterious and dangerous depths.

These elite divers have reached a depth of 472 feet in the spring, but there's more cave below that, said chief diver Mike Young of Fort Smith. Their dive to 472 feet in November 2021 set the record for the deepest explored spring in the United States. The previous record was 462 set in 2013 at Phantom Spring Cave in west Texas.

A depth of more than 472 feet makes Roaring River Spring the deepest spring in Missouri. Yet that wasn't known until divers with the KISS Rebreathers dive team, based in Fort Smith, started exploring deep into the spring in May 2021. Their latest dive operation this year was Aug. 18-21 with 14 team members. Their next dive will be Saturday.

Exploration began after a long process of getting permits from Roaring River State Park and Missouri Department of Natural Resources to dive in Roaring River Spring. Permits are renewed every six months, Young noted. Recreational diving is prohibited in the spring.

Professional divers have explored the spring before -- two in the spring of 1979. A team in the early 1990s reached a depth of 225 feet. At that depth, there's a tight squeeze through a restriction that leads to more of the spring's cave. Bulky conventional scuba tanks prevented those divers from penetrating beyond the restriction.

Rebreather scuba technology the current team uses was developed in the late 1990s. Rebreathers are smaller than conventional scuba air tanks. They work by removing the carbon dioxide from a diver's exhaled breath so the diver rebreathes the oxygen.

The KISS (Keep It Super Simple) brand of rebreathers are manufactured in Fort Smith at Young's business, which builds several rebreather models. Special training is required before a diver can purchase a rebreather.

The smaller rebreathers allowed the divers to go through the restriction. Still, the squeeze is tight, said Randall Purdy of Kearney, Neb., the team's underwater photographer. Gesturing with his arms, he formed an opening about the diameter of a 55-gallon barrel.

Wonders never before seen by humans unfolded when the divers emerged. They encountered a colossal water-filled cave room so large it could contain the 550-foot tall Washington Monument, according to Young.

At 472 feet, that large room becomes narrower, Young said. Divers that deep may be nearing the spring's source tunnel, he noted.

While rebreathers are high-tech, divers measure depth in a super simple way. They use lines that have knots every ten feet. The end of that line is at 472 feet. Lines also help the team navigate inside the water-filled cave and are not removed between monthly dives into the spring.

Such diving is not for the inexperienced. KISS Rebreathers team members are among the most expert cave divers in the world. Each diver brings a special skill to the team, such as cave mapping skills, underwater photography or biology.

"Cave divers are 1% of the diving community. We're 1 % of that 1 %," said Young, who has explored caves and springs worldwide.

Their mission is to gather scientific information from the spring for the Missouri Department of Natural Resources. A documentary of the exploration using Purdy's photos and video is being produced by T.L. Bass Telepictures of Bentonville. A version of that documentary will be available to view in the Ozark Chinquapin Nature Center at Roaring River State Park.

Plans are to display a new, more accurate map of the spring for park visitors to see to at the spring's outflow, the divers said. Roaring River Spring's flow averages 20 million gallons per day.

Divers are eager to share their knowledge and experience with Roaring River State Park visitors when the team is at the park. The spring remains open to visitors who are welcome to come and watch the dive operation and talk with divers as they get set to enter the water.

Preparations start around 8 a.m., and divers start entering the water at 9 a.m. Operations end around noon.

More dives are set for Oct. 13-16 and Nov. 10-13, weather permitting. Diving isn't done during spring because rainfall increases the spring's flow and the current prevents the divers from going through the restriction at the 225-foot depth.

Safety is paramount. Divers check and double check each other's equipment. Air bottles are secured underwater at different depths in case they're needed, along with other underwater safety precautions.

Tony Bryant of Fort Smith runs the show on the surface. He records when each diver hits the water and knows the exact time of their return to the surface. Greg Ables of Van Buren is a safety diver with the team.

Most of the time underwater is spent returning slowly to the surface. Divers must pause for periods of time at various depths to prevent decompression sickness, also called "the bends" which can be fatal. It's the least exciting part of the dive, Purdy said. The deeper the dive, the longer decompression takes.

Trout fishing is the premier activity at Roaring River State Park. The spring is located near the Missouri Department of Natural Resources hatchery that raises trout for stocking in the mile of stream that starts at Roaring River Spring. Some big trout swim in a pool situated at the spring's outflow. Divers said they've seen trout in the spring as deep as 50 feet.

Fernando Calderon, a marine biologist from Texas, is documenting life in the spring. Amphipods and isopods --tiny crustaceans less than one-half-inch long -- are seen as deep as 200 feet, Calderon said. A cave salamander was seen in April.

"We do this for the adventure and knowledge," Calderon said.

Some of the team lives in the Fort Smith area. Others hail from several states. Gayle Orner, the team's lone female diver, lives in Madison, Wis. Cartographer Jon Lillestolen travels from Virginia and underwater photographer Randall Purdy travels from Nebraska.

"We all feel privileged to be part of this ," Purdy said. "Doing stuff that's never been done." 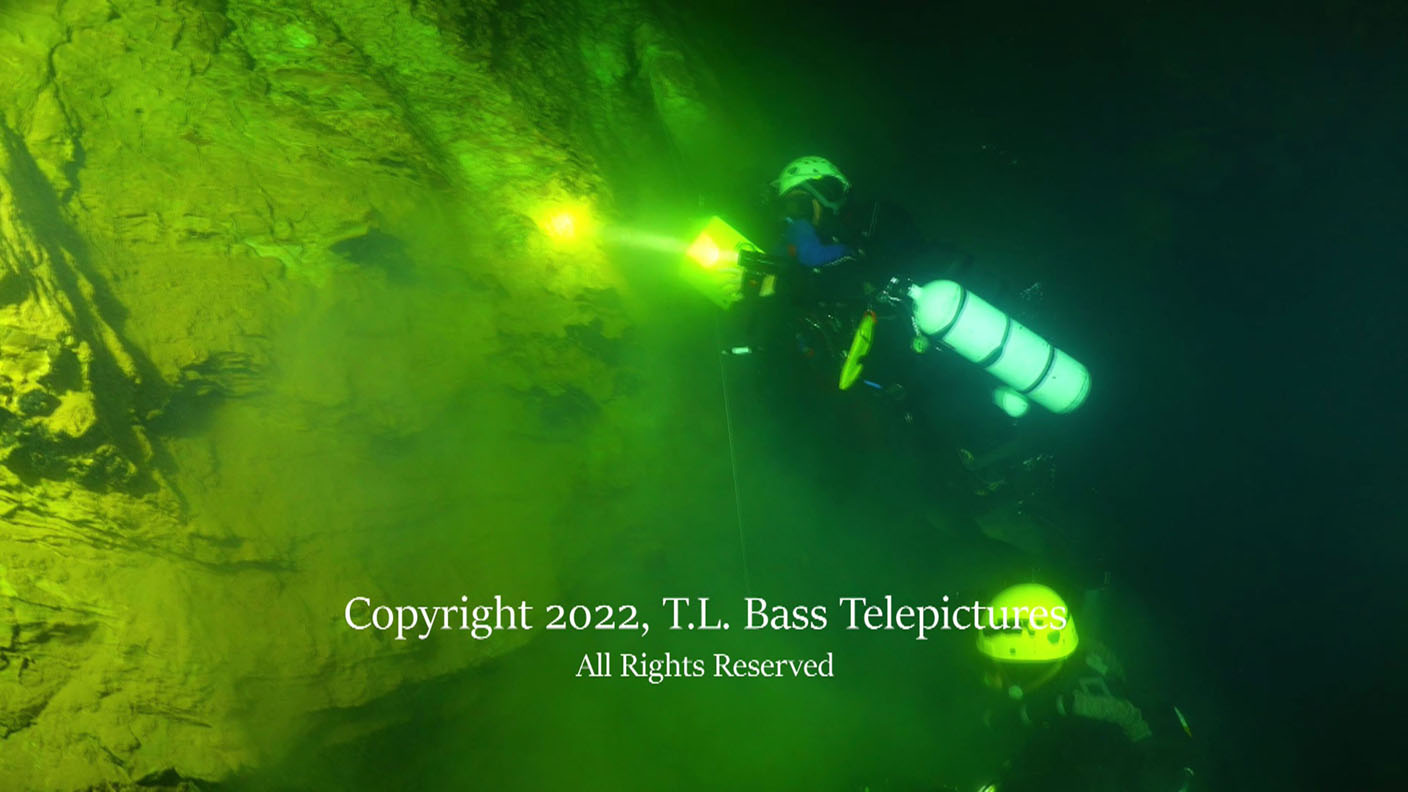 Divers explore Roaring River Spring at a depth of 250 feet. The divers have explored as deep as 472 feet, which set a world record for the deepest cave dive. (Courtesy photo) 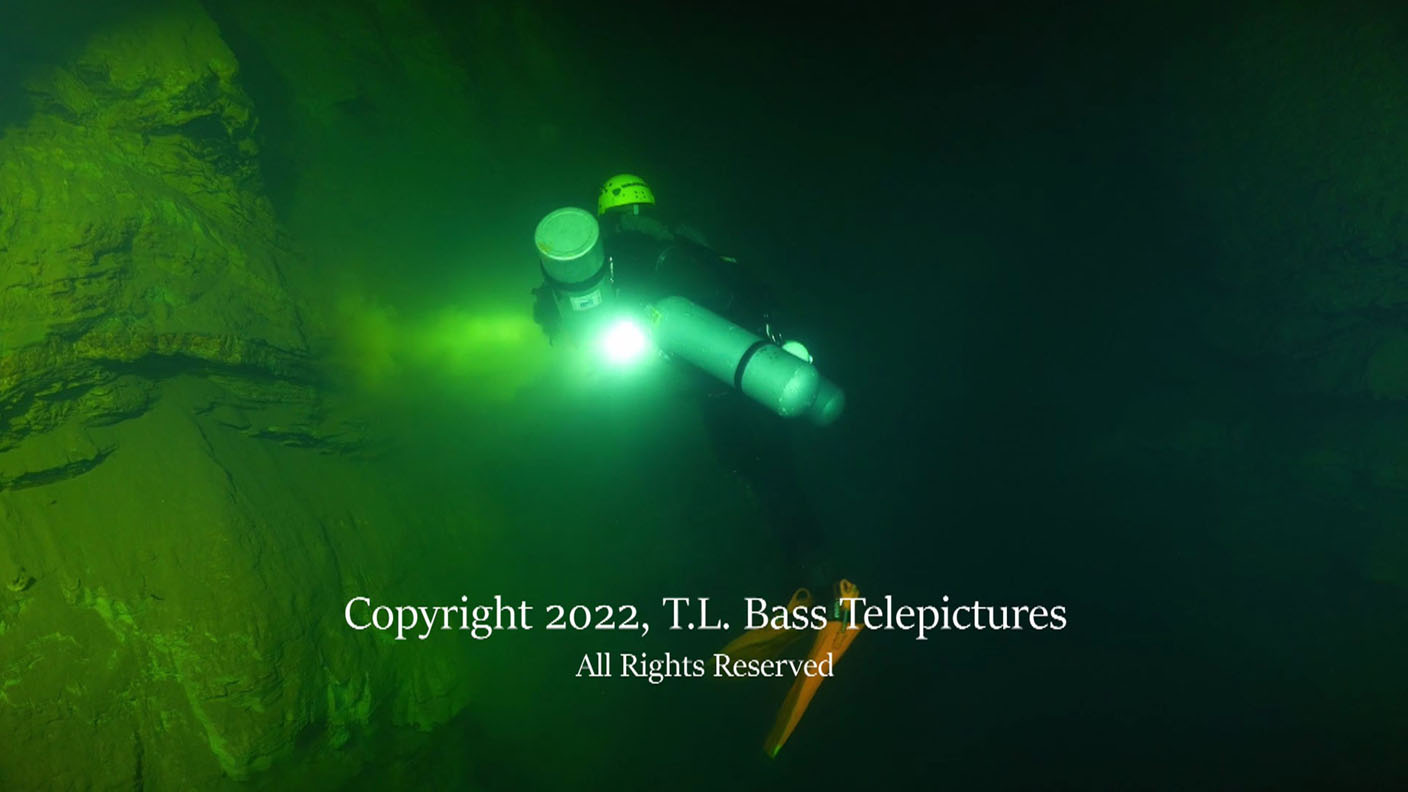 Divers explore Roaring River Spring at a depth of 250 feet. The divers have explored as deep as 472 feet, which is a world record for the deepest cave dive. (Courtesy photo) 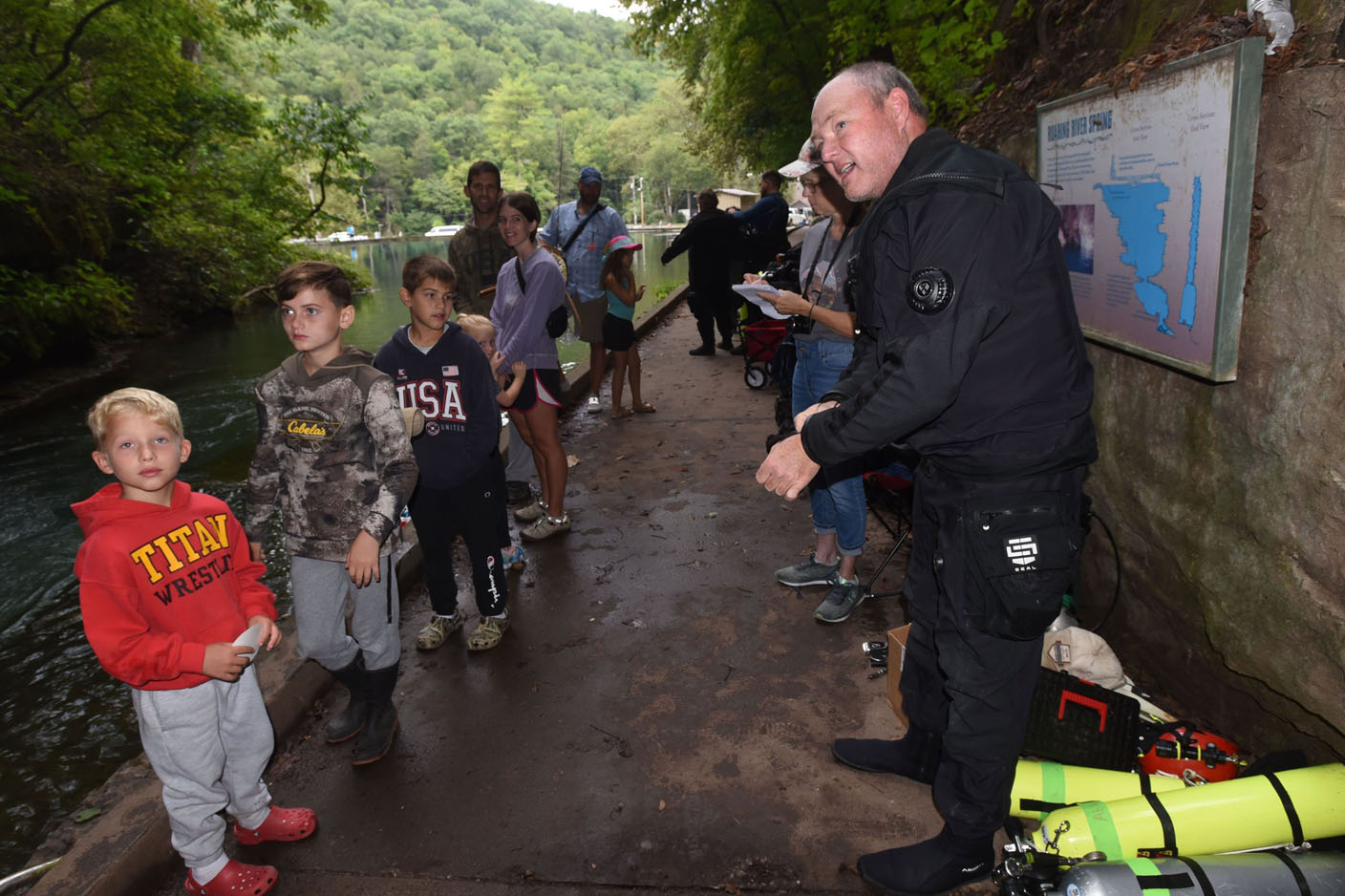 Greg Ables (right) of Van Buren, a member of the dive team, talks with park visitors on Aug. 20 2022 about exploring Roaring River Spring. People are welcome to watch dive operations that begin at the spring's outflow near the Roaring River trout hatchery. (NWA Democrat-Gazette/Flip Putthoff) 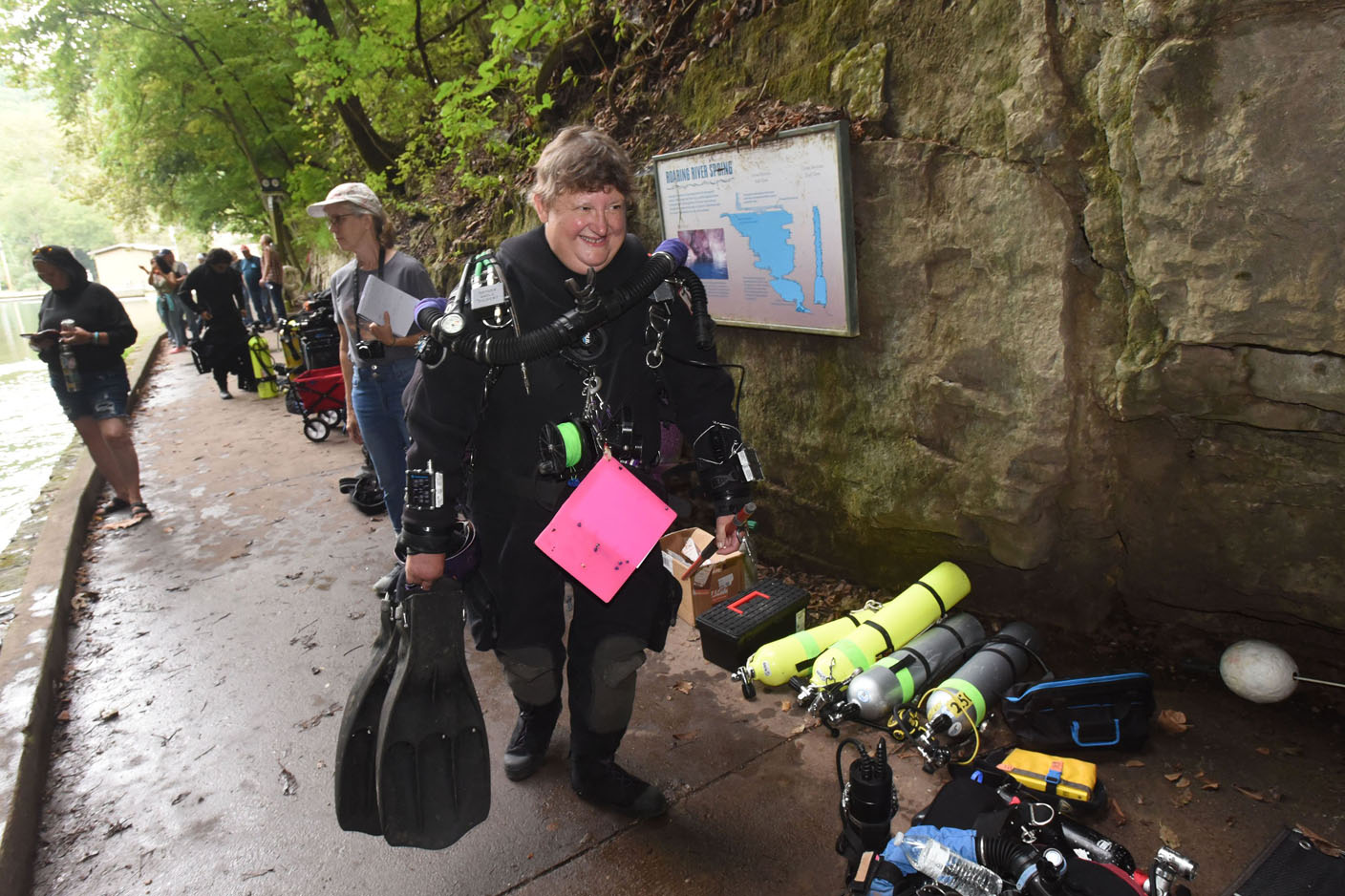 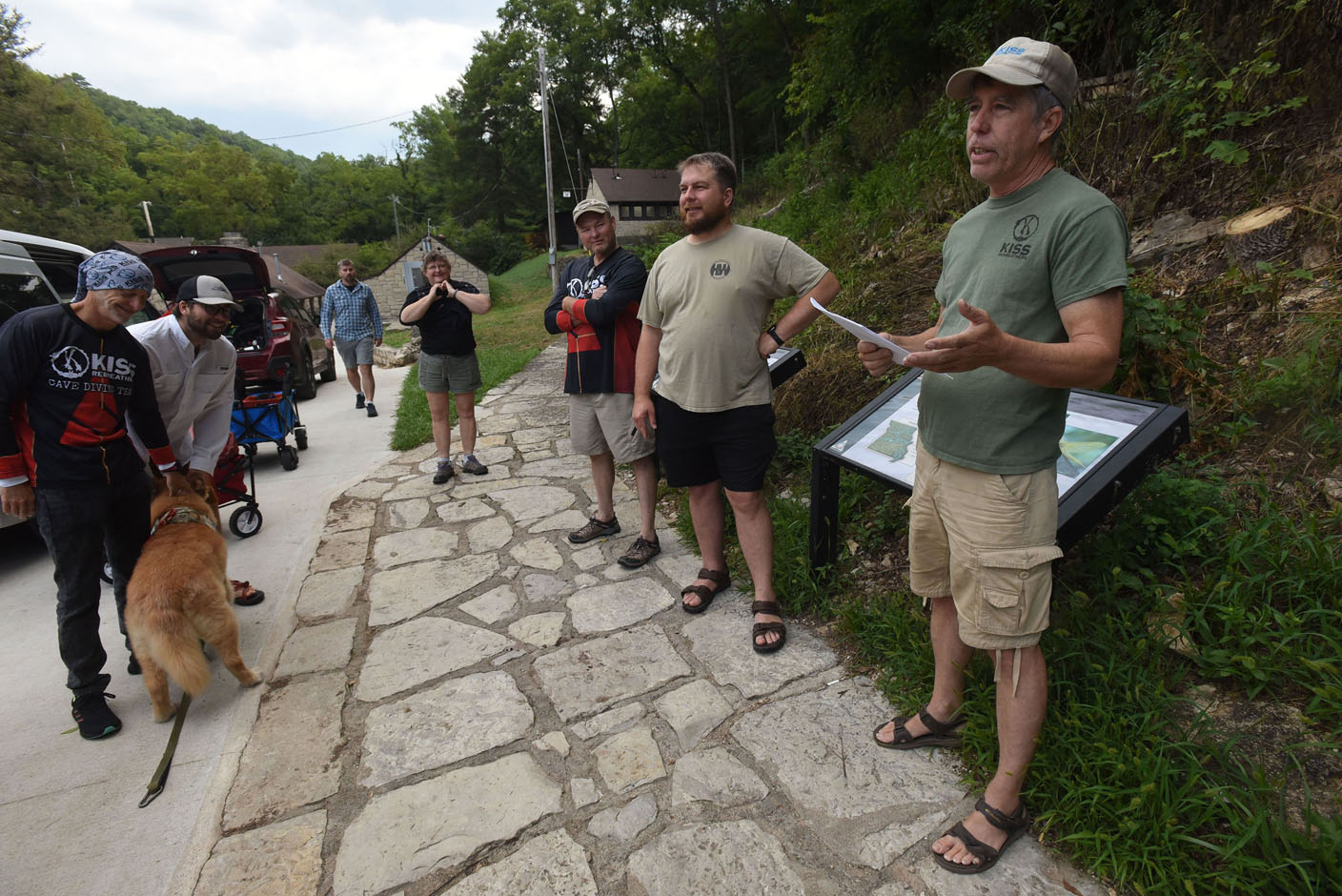 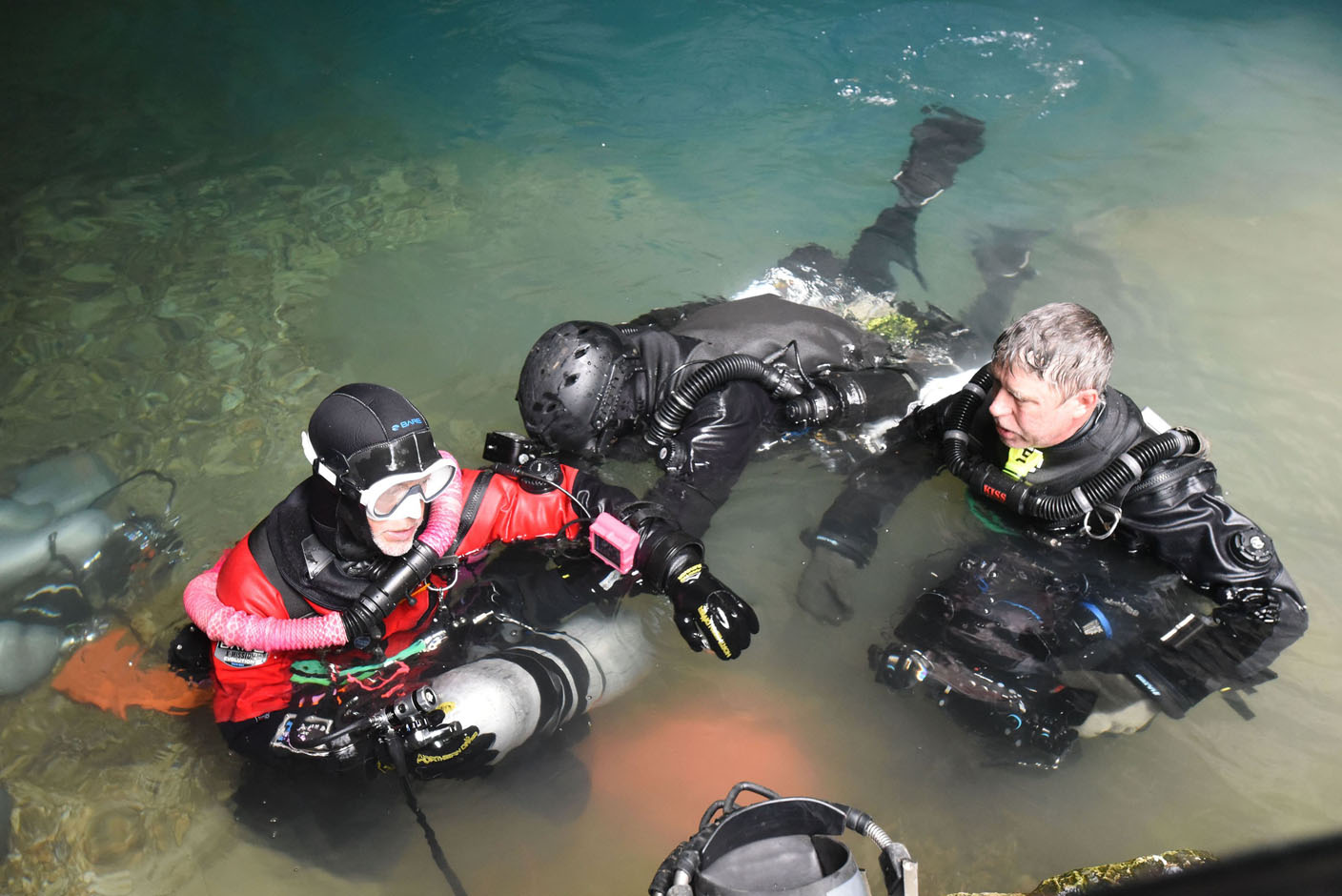 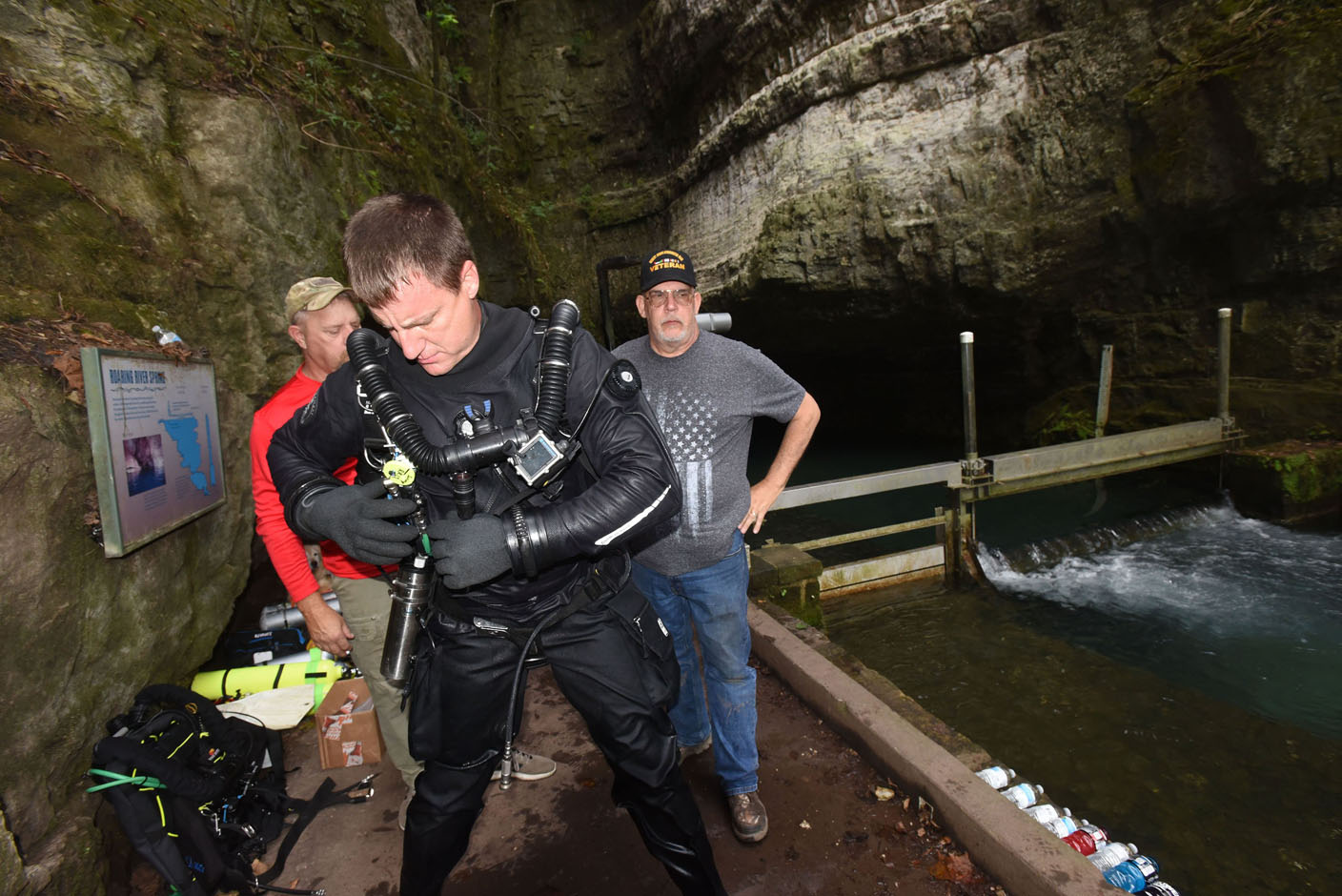 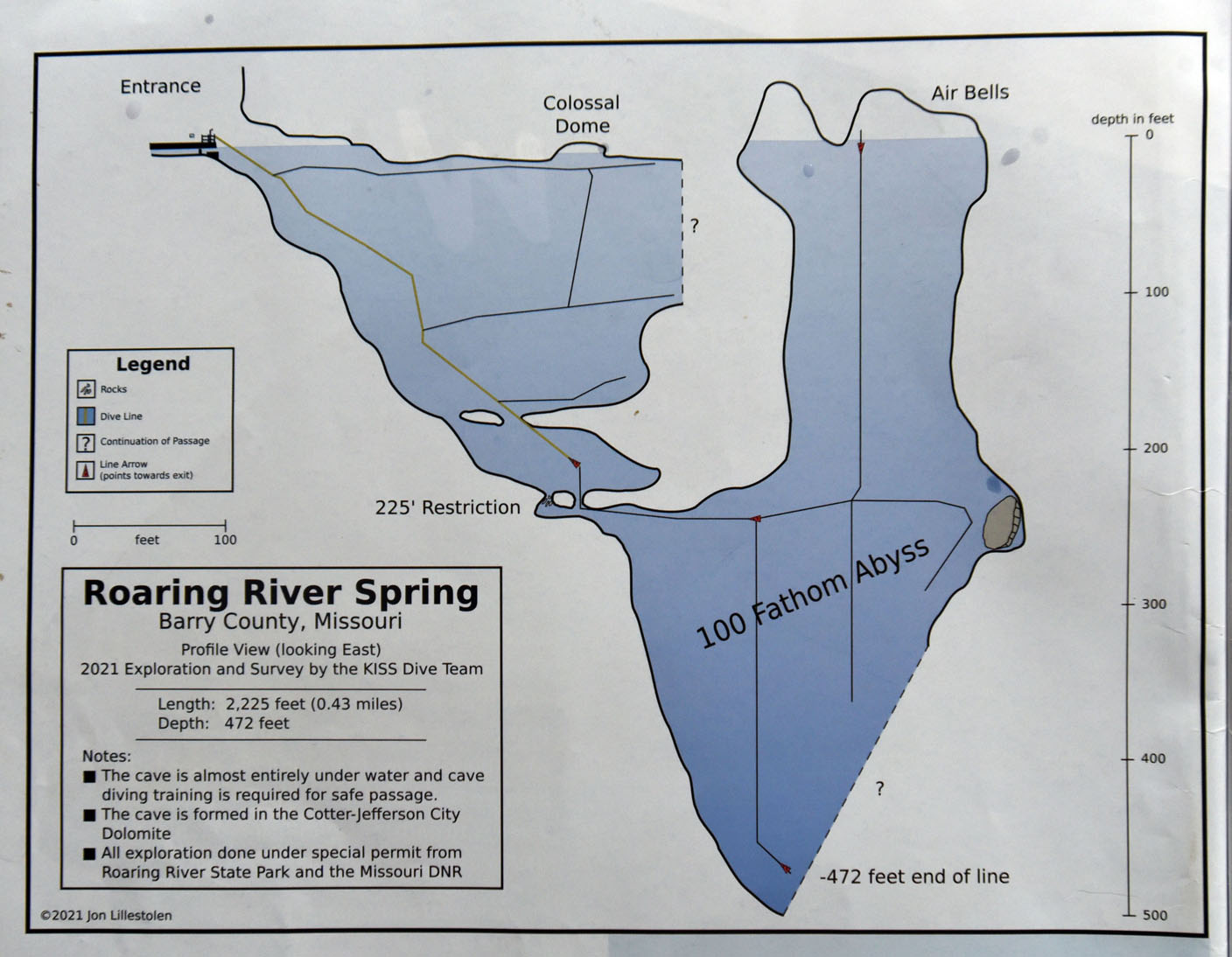 Dive team member Jon Lillestolen of Virginia created this map of Roaring River Spring with information from dives in 2021. Plans are to install an updated map of the spring to replace one that park visitors currently see at the spring's outflow. (NWA Democrat-Gazette/Flip Putthoff)

KISS Rebreather dive team members will host a free “meet the divers” program at 4 p.m. Saturday at the Emory Melton Inn and Conference Center at Roaring River State Park. The park is along Missouri 112 south of Cassville, Mo.

Divers will have their rebreather equipment and other gear on display. They will talk about exploring the spring and cave and show video from deep inside Roaring River Spring.