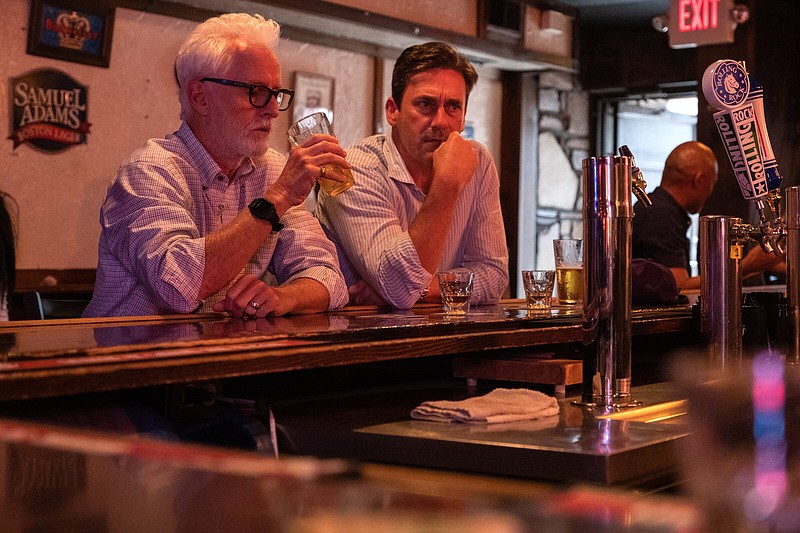 Now here's an unexpected series reboot I never saw coming. In fact, I can't imagine anyone did. "Fletch" (1985) and "Fletch Lives" (1989) were moderately popular Chevy Chase vehicles. Neither are what I would call comedy classics, but they did have some memorably funny moments in large part thanks to Chase's madcap comic energy. The Fletch-verse expands with "Confess, Fletch," a well-meaning misfire that never captures the zaniness of the '80's film (and that's hardly a high bar).

Directed by Greg Mottola from a screenplay he wrote with Zev Borow, "Confess, Fletch" starts with promise, and for a while it had me rethinking what seemed like a peculiar choice of Jon Hamm in the Chevy Chase role. But over time the snark gets old, the gags run dry, and no matter how hard Hamm tries, he can't make his version of Irwin M. "Fletch" Fletcher interesting. Tack on a murder mystery that grows more tedious by the minute, and you're left with a reboot that probably should have stayed on the shelf.

Hamm brings the occasional quick wit, goofy aliases and signature Los Angeles Lakers ballcap that Chase brought to the Fletch character. But gone are the wacky disguises and the even wackier encounters they would lead to (perhaps that brand of '80s silliness doesn't screen as well today). And while the story plucks plot points from the previous movies, it doesn't add much to them. So ultimately we're left with a movie that doesn't do much with the older material and doesn't add anything noteworthy of its own.

The Fletch we get here is a freelance writer who has spent the last two years traveling Europe and writing about art for in-flight magazines. After a month in Rome he returns to the States, stopping in Boston where he rents a swanky townhouse from a free-spirit named Owen (John Behlmann). But upon arriving at his two-week "home away from home," Fletch makes an alarming discovery -- the body of a dead woman, face-down in the townhouse's living room floor.

The police arrive on the scene and the investigation is headed by the ever-sleepy Detective Monroe (Roy Wood Jr.). He's the father of a newborn who keeps him up all night, leading to a running joke that (like much of the movie) eventually runs out of gas. Monroe and his partner in training, Griz (Ayden Mayeri) eventually tag Fletch as their prime suspect. But the sardonic Fletch sets out to solve the case himself, relying on his credentials of once being an investigative journalist "of some repute."

Meanwhile there's this side story (which may or may not be linked to the murder) involving Fletch's wealthy Italian girlfriend Angela de Grassi (Lorenza Izzo) and her abducted father. His kidnappers want the de Grassi's priceless Picasso painting as ransom, but someone has recently stolen it along with several other pieces from the family's collection. Fletch has traced the recent sale of one of the paintings to Boston, which is why he's in Beantown.

As these two story paths inevitably converge, we're introduced to a handful of other mildly interesting characters who may or may not be involved in the murder. There is a germophobic art maven named Horan (Kyle MacLachlan) who is the middle-man in a number of Boston area art dealings. There's the gossipy stoner Eve (Annie Mumolo) who lives next door to the townhouse Fletch is renting. Then there's Countess de Grassi (Marcia Gay Harden), Angela's stepmother who may or may not be heartbroken over her husband's kidnapping. They even throw in Hamm's "Mad Men" cohort John Slattery as Fletch's foul-mouthed and disgruntled former boss who now works for a struggling Boston rag.

With the exception of a stray laugh or two, none of the supporting players brings much to the story. And some of them are confined to these grueling and unfunny exchanges that add nothing other than their names to Fletch's suspect list. Harden and Mumolo are the biggest casualties, let down by a script that doesn't seem to know what it wants to do with them. And while all of these characters are supposedly linked in different ways to the central mystery, none of them can make it any less tepid or any more compelling.

So we're left with Fletch and Mottola's new spin on the character. Hamm puts in the effort, and early on it looks like he just might pull it off. But his act loses steam, the jokes grow repetitive, and nothing that we're given feels like a worthy reason for an update. Chase's version of the character was goofy enough to make two fairly mediocre movies fun. Hamm can't make the same claim. But it's hard to put the blame on him, especially when the material he's asked to sell has no lasting value.