‘See How They Run’ 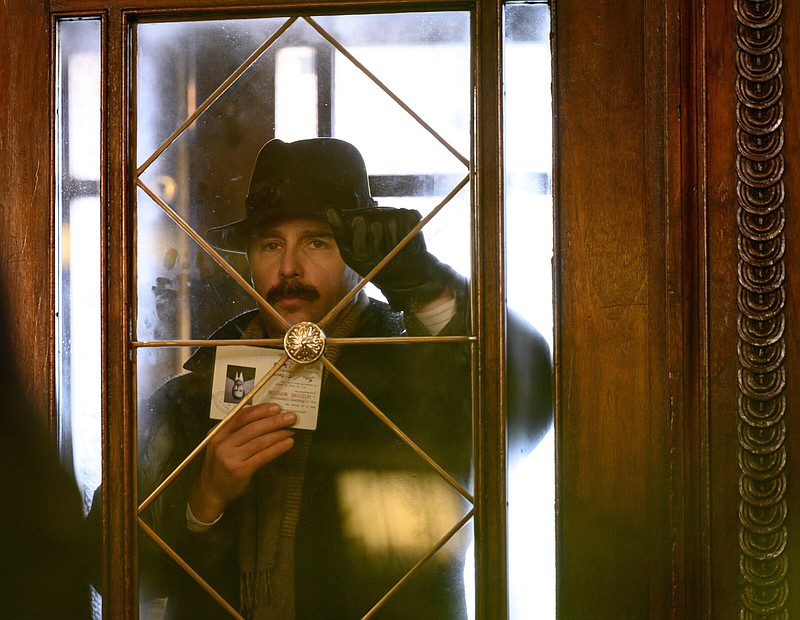 First-time feature film director Tom George teams with screenwriter Mark Chappell for the old-fashioned mystery caper "See How They Run." With a strong cast and plenty of nostalgic charm, this playful and thoroughly enjoyable whodunit is a full-blown homage that still manages to balance suspense with a healthy dose of chuckles. It's as much a comedy as it is a murder mystery -- one full of dry humor, deadpan deliveries and a not-so-subtle air of absurdity that had me laughing quite a bit.

Among the many amusing things about "See How They Run" is its connection to Agatha Christie's renowned stage play "The Mousetrap." A little background -- "The Mousetrap" opened in 1952 at London's Ambassadors Theater. Christie herself expected around an eight month run. Yet here we are, 70 years later, and it's still being performed in London's West End. Even with a 14-month mandatory shutdown in 2020 due to the covid-19 pandemic, "The Mousetrap" remains the world's longest-running play, with nearly 29,000 performances under its belt.

Yet there has never been a proper film adaptation of "The Mouse Trap." That's because Christie had worked a condition into her contract that said no film could be made until six months after the production closed. Seven decades later and the show is still going strong. "See How They Run" waggishly plays with that obvious constraint by creating an original whodunit around Christie's beloved whodunit. More specifically, the film is loosely based on early plans to make "The Mouse Trap" into a movie. But with a little fictional murder thrown in, of course.

Set in 1953 London, the cast and crew of "The Mousetrap" are at the Ambassadors Theater celebrating the play's 100th performance. This snappy opening is narrated by the ghost of Leo Kopernick (a terrific Adrien Brody) who's recounting the events that led up to his murder. Leo describes himself as a "big shot Hollywood director," but he's more of a condescending lush. And within the film's first few minutes, he's bumped off in the theater's backstage costume room. But why is a Hollywood guy like Leo at the party? Even more, who would want him dead?

We learn in Leo's introduction that prominent theater impresario Petula Spencer (Ruth Wilson) has sold "The Mouse Trap" film rights to John Woolf (Reece Shearsmith), the famed British producer behind "The African Queen." Woolf has hired Leo to direct his adaptation once the play closes (and following Christie's six month stipulation). While at the party Leo butts heads with the film's preening and forcefully proper screenwriter, Mervyn Cocker-Norris (David Oyelowo). He even comes to comical blows with the play's dashing young star, Richard Attenborough (Harris Dickinson) after Leo makes a play for the actor's wife, Sheila Sim (Pearl Chanda). And just like that, we have the first draft of our suspect list.

In very Agatha Christie fashion, George and Chappell offer up ample motives for these characters to want Leo dead. Could it be creative differences? Maybe he has dirt on them? Perhaps it's something more complicated? All we need is someone to untangle this mess of a mystery. Enter the unlikely Scotland Yard duo of Inspector Stoppard (Sam Rockwell) and Constable Stalker (Saoirse Ronan).

The not-so-hard-boiled Stoppard looks fresh out of a low-budget 1950s noir with his felt hat, frumpy suit and wool topcoat. He checks off many of the boxes -- cynical, world-weary, prefers to work alone. But Rockwell brings an understated goofiness to the character and pulls some good laughs out of Stoppard's obvious detachment. The chatty, enthusiastic Stalker makes a perfect foil for her aggressively aloof partner. Ronan is delightful and channels a similar comedic energy as in her movies with Wes Anderson. She not only gives us the story's most likable character, but also its funniest.

"See How They Run" is full of creative flourishes that work really well. Take Leo's opening narration where he gets sidetracked talking about how whodunits work ("You've seen one, you've seen them all.") He amusingly recites the very rules our movie will be playing by. You also have George's clever incorporation of flashbacks and his stylish use of split-screen which may feel a little arbitrary at first, but that makes sense once you realize what the movie is going for. There are also some fun inside jokes for theater fans and some good ribs at Old Hollywood. And the movie looks great and period proper, from Odile Dicks-Mireaux's fantastic costumes to Amanda McArthur's stellar production design.

Now I don't want to oversell it. "See How They Run" isn't something revolutionary. It spins its wheels a bit in the middle, and more time could have been spent on a couple of the suspects. Yet I kinda love this cheeky throwback. Sure, it plays it safe and doesn't take its genre to any bold new place. But you could say that's the point. As Leo emphasizes, we know the rules. We've seen these movies before. Yet (much like "The Mousetrap") they're still here, we still watch and we still enjoy them. George and Chappell aim to celebrate these classic whodunits while poking fun at them along the way. It turns out to be a charming mix.

‘See How They Run’ 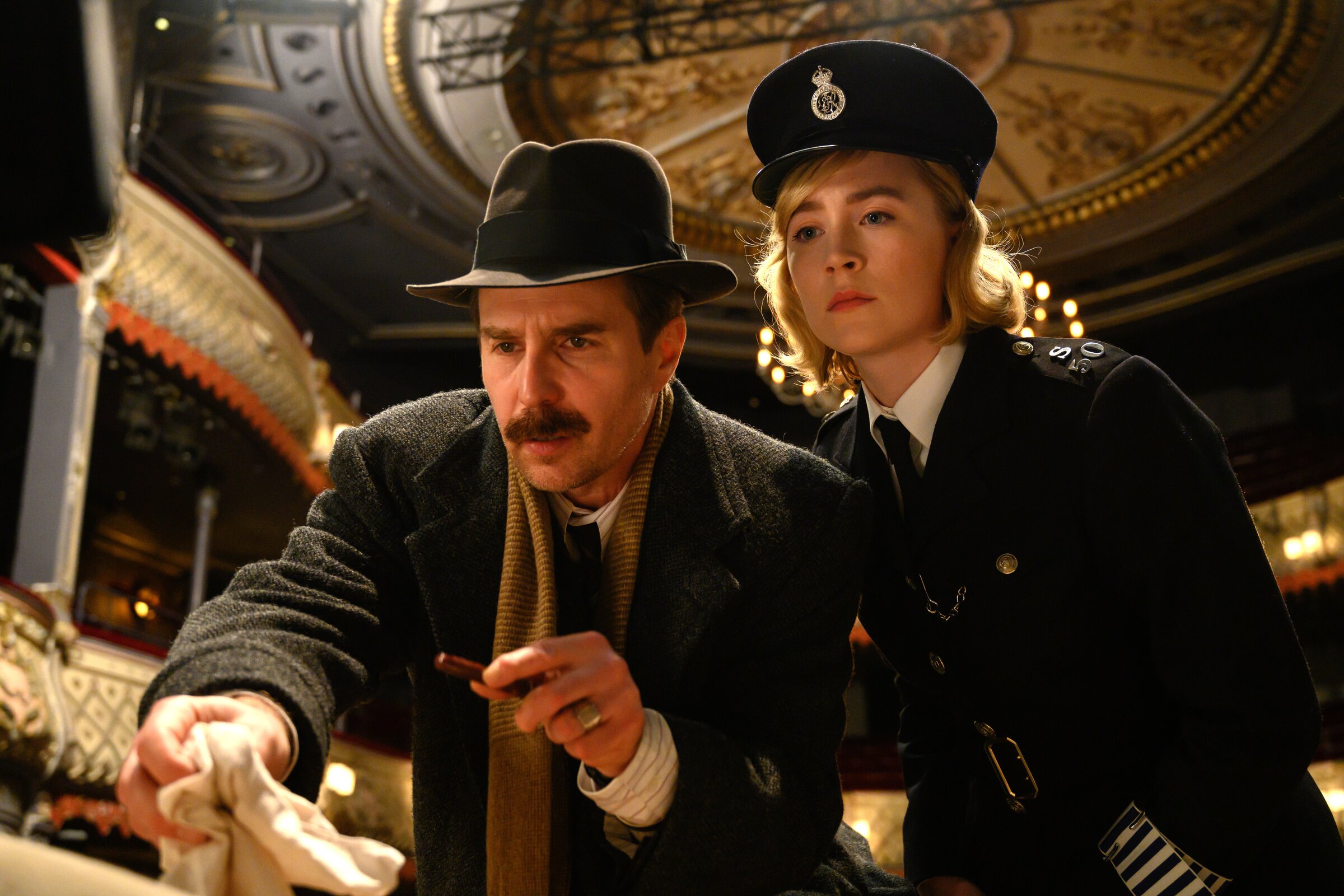 Depressive Scotland Yard Inspector Stoddard (Sam Rockwell) and chirpily upbeat Constable Stalker (Saoirse Ronan) have to work together to solve the murder of a Hollywood director in Tom George’s “See How They Run.”

Print Headline: ‘See How They Run’