Kayak trip answers question: Where does the river end and lake begin? 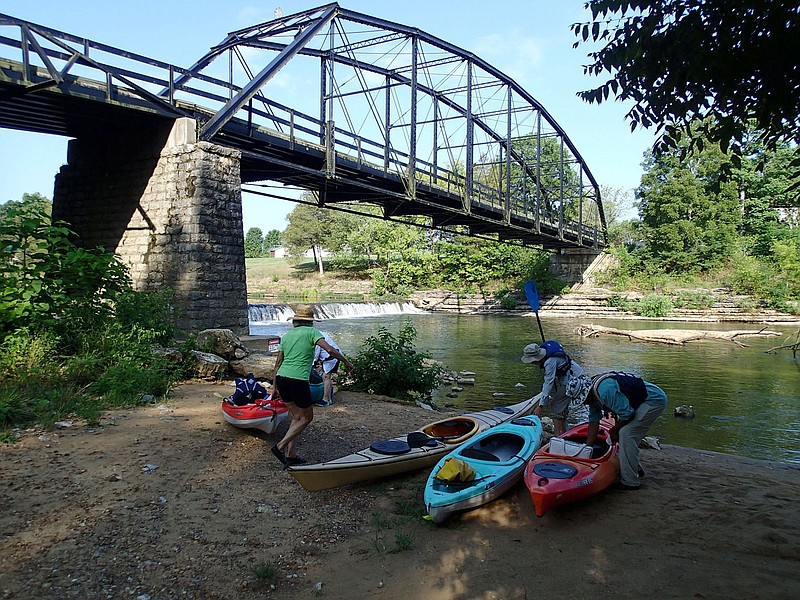 Paddlers get boats ready for a trip along the War Eagle River and into the headwaters of Beaver Lake. (NWA Democrat-Gazette/Flip Putthoff)

Traveling around Northwest Arkansas, it can be hard to tell where one town ends and another begins. Drifting down the two largest tributaries of Beaver Lake, paddlers may wonder where the rivers end and the lake begins.

There are no city limit signs on the White or War Eagle rivers telling boaters they are now entering Beaver Lake, population thousands of fish and 31,000 surface acres.

A second conundrum is this: Where the rivers end and the reservoir begins depends on the water level of the lake.

When Beaver Lake is high, as it usually is in the spring, the War Eagle River becomes Beaver Lake at War Eagle Mill. That's because lake water backs as far upstream as the low dam at the mill. When the lake is low, the War Eagle is a flowing river two, three or more miles downstream from the mill before the flow stops and the lake headwaters begin.

On the White River at high lake levels, the lake's headwaters are far upstream of the Arkansas 45 bridge east of Fayetteville. When the lake is low, the White remains a river far downstream from the bridge.

One way to see this play out is with a relaxing float trip on the War Eagle River from War Eagle Mill downstream to the lake headwaters. Right now the lake is a tad low, which means the river becomes lake some two miles downstream from the mill.

A flotilla of five kayakers found the trip delightful on a warm day in August. Bluffs cradle the river nearly all the way. Kingfishers and herons escort paddlers downstream on gentle current.

For this float, the group left their kayaks on the beach under the historic War Eagle bridge near the mill and shuttled vehicles to a pay access one mile downstream from the bridge. The mill staff asks paddlers to park in the lot across the road from the mill.

To reach the pay access from the bridge, drive west on War Eagle Road for about one-quarter mile. Where the road turns sharply left there's a gate with an honor box where people pay $2 per car to go through the landowner's property on a gravel lane to the river.

Launching at the bridge, there's some shoals that are easy to navigate for paddlers of any ability. The river gets calm some 75 yards downstream from the bridge. From there it's smooth, easy paddling downstream to the Beaver Lake headwaters.

Bluffs are the main attraction here. The most unique is on river right about one-half mile downstream from the bridge. The bluff sort of undulates and appears as a wave of rock instead of water. After sufficient rain, there's a wet-weather spring at the start of this bluff.

Farther down, dozens of cliff swallow nests are attached to another bluff on river right, but the birds are long gone on their migration to South America.

More amazing bluffs unfold on river left, but they're different than those upstream. These bluffs are more rounded, like massive round boulders rising from the water. Multicolored wildflowers cloak parts of these rocky orbs.

Then the bluffs give way to a low-land area where the group chose to paddle back upstream, which was a piece of cake in the minimal current. Soon they were at the pay access where they loaded boats on their vehicles for the trip home. That is, after they picked up any scraps of litter at the access that the landowner generously lets people use.

On the way out, cattle can sometimes be seen roaming the open pasture. Country etiquette dictates the person riding shotgun opens at closes the gate on the way out. Doesn't matter who does the duty as long as that gate gets shut. It's the finale of a fine day on the water where river meets lake. 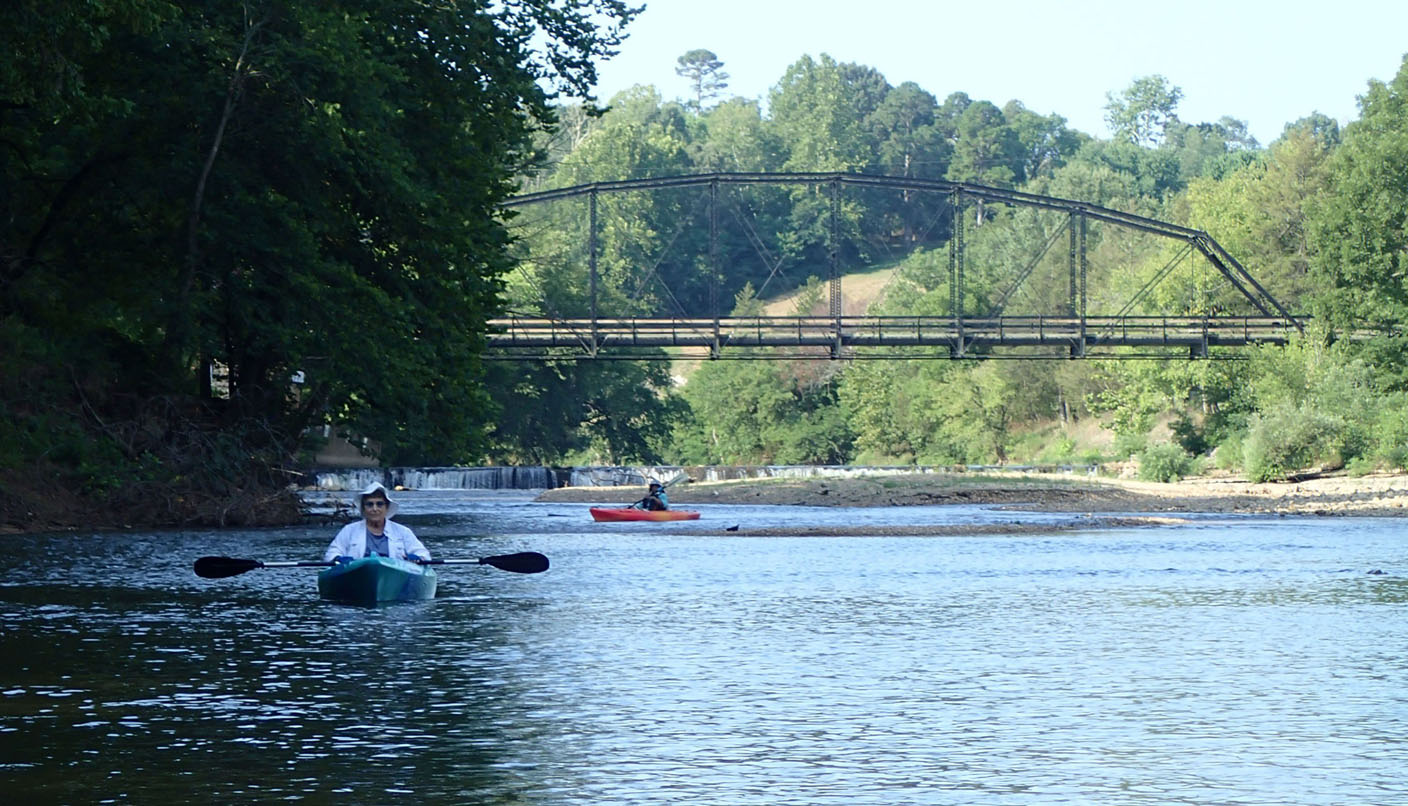 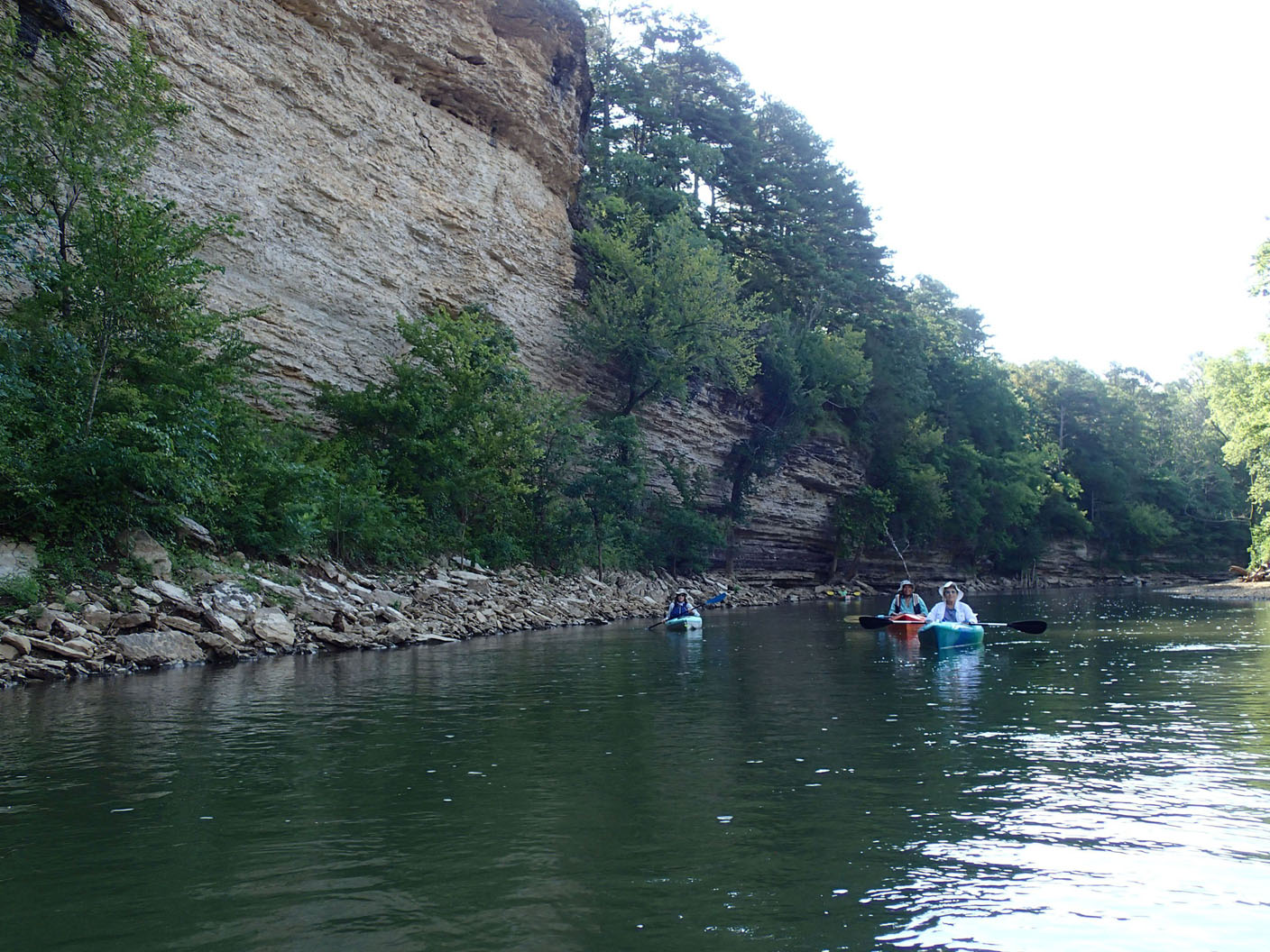 Karen Mowry (from left), Gene Williams and Judy Tobler drift Aug. 5 2022 beside one of the many bluffs on the War Eagle. Here they are still on the river, but will soon float into the headwaters of Beaver Lake. (NWA Democrat-Gazette/Flip Putthoff) 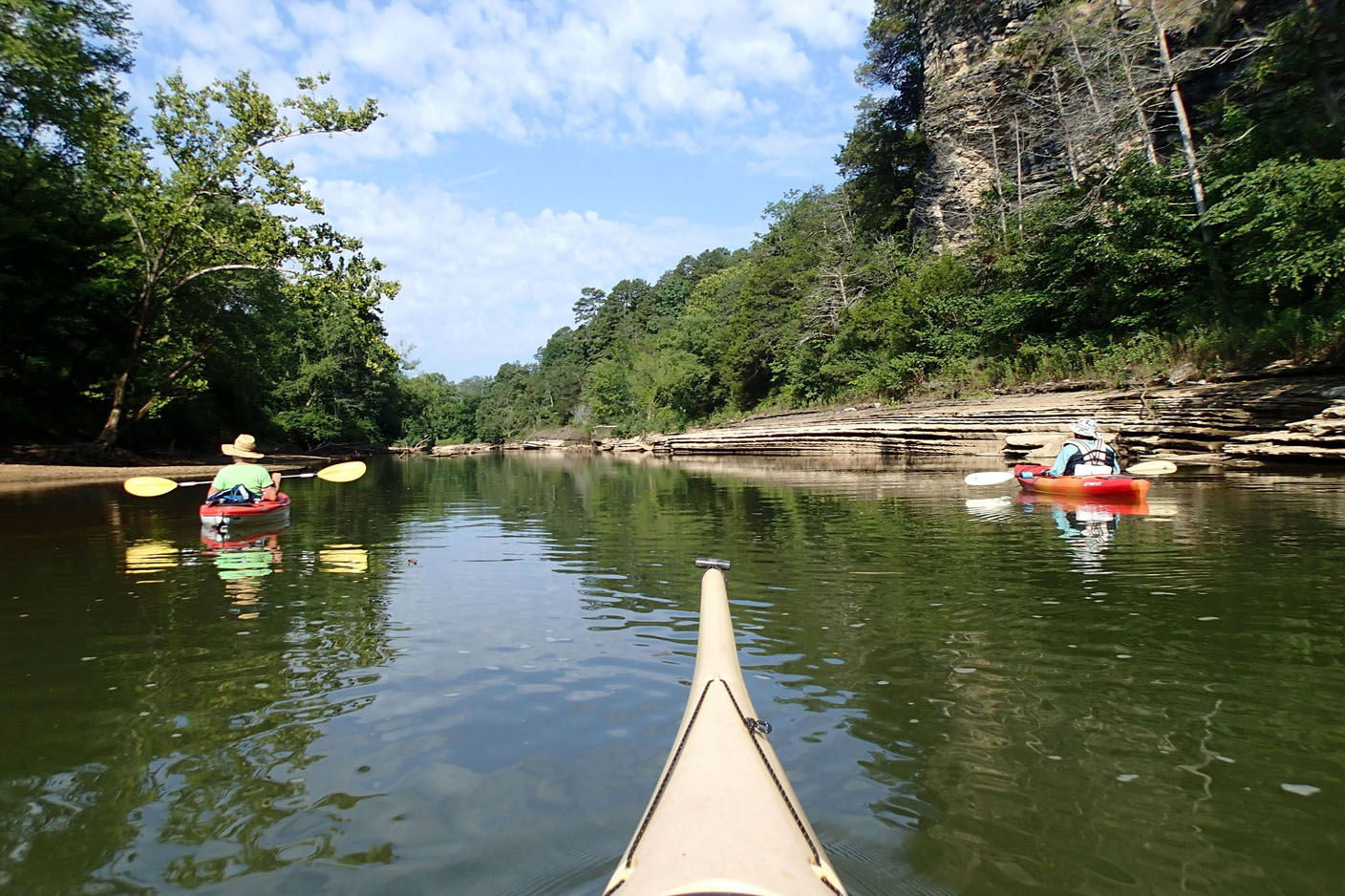 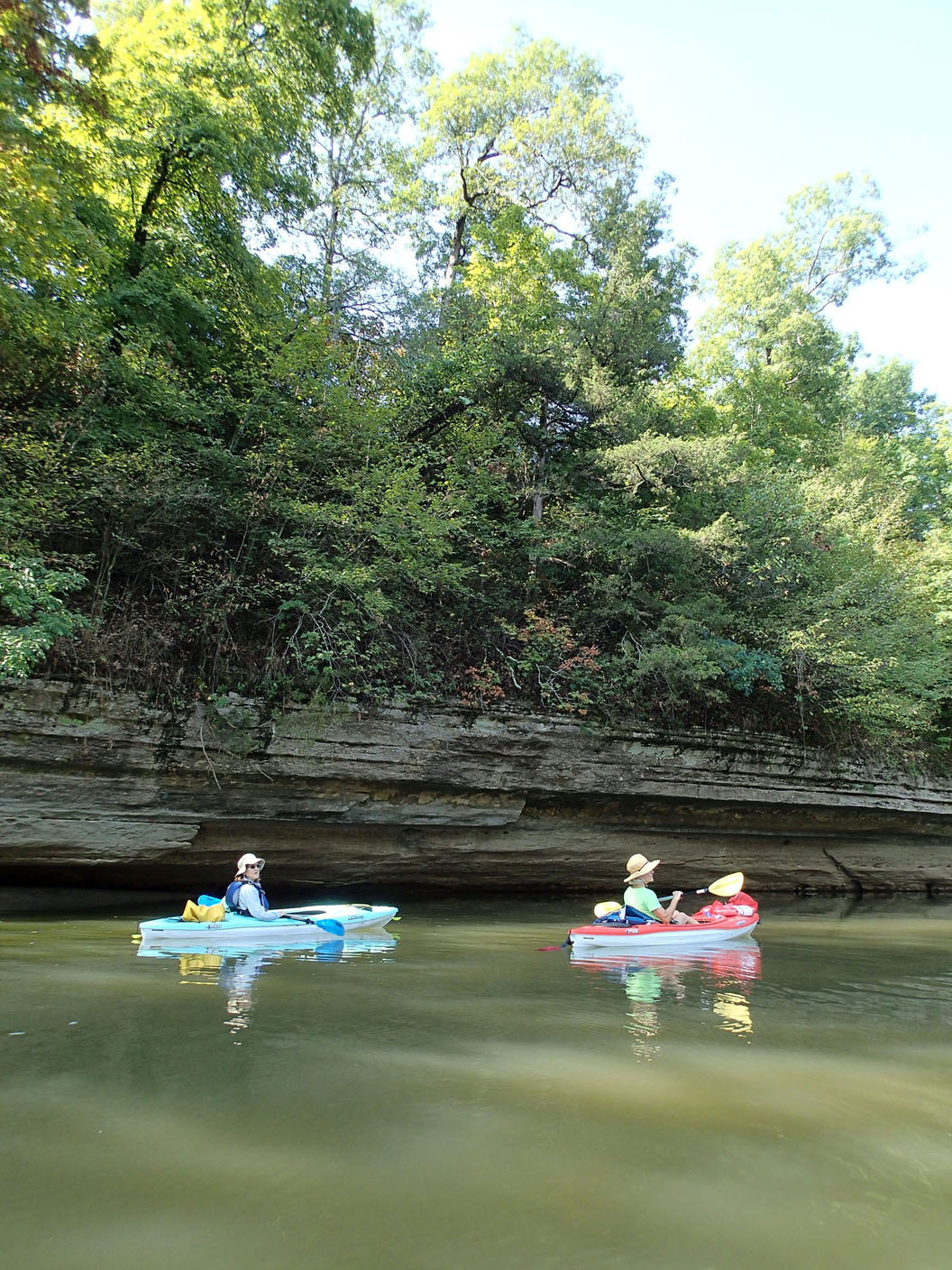 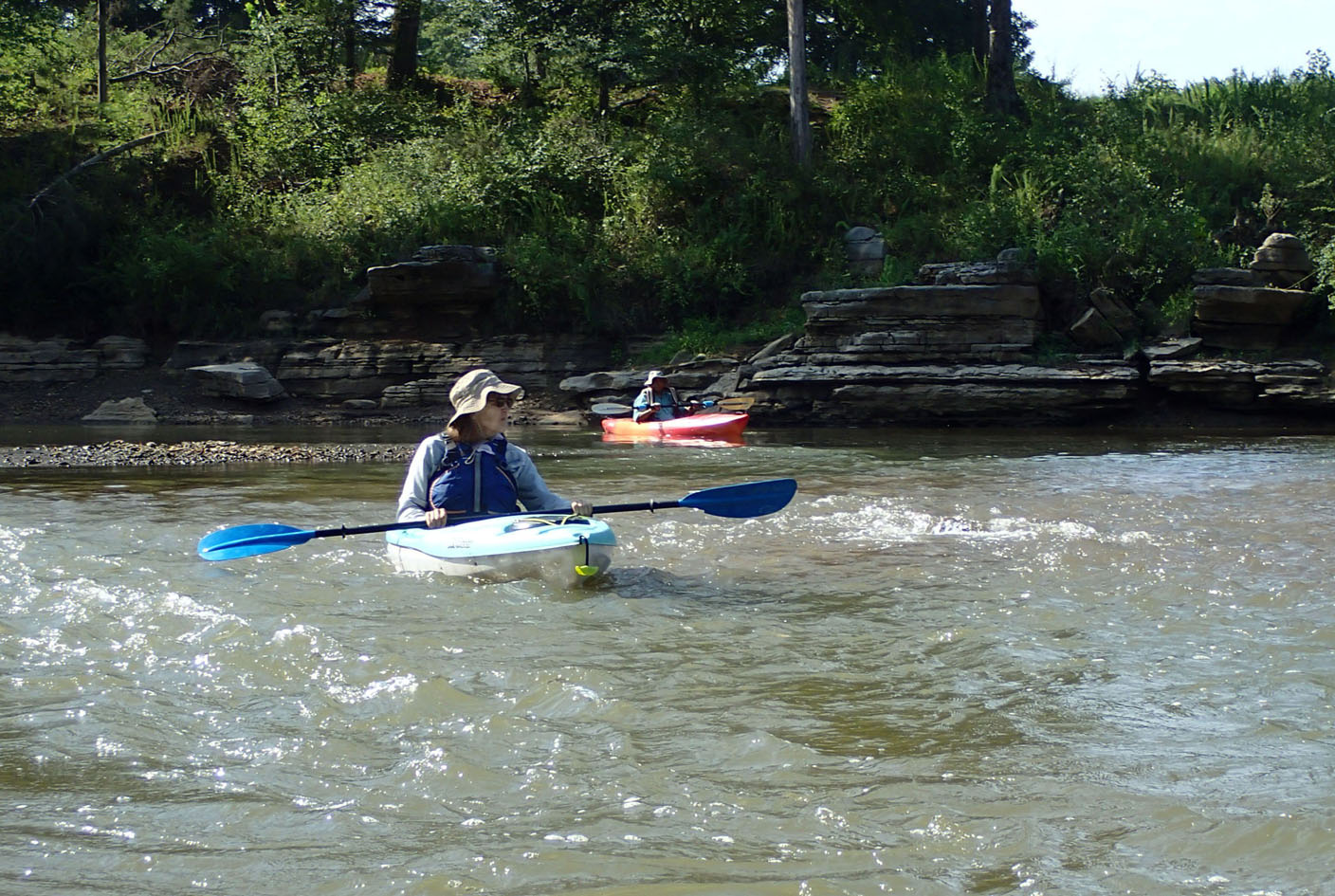 Miles of shoreline: 450, depending on lake level.

Beaver Lake was built in the mid-1960s when the dam was constructed on the White River near Eureka Springs. The White and War Eagle rivers are the lake’s two primary tributaries. The lake was built primarily for flood control, but it is also the drinking water source for most of Northwest Arkansas and beyond. More than 500,000 people get their drinking water from Beaver Lake.