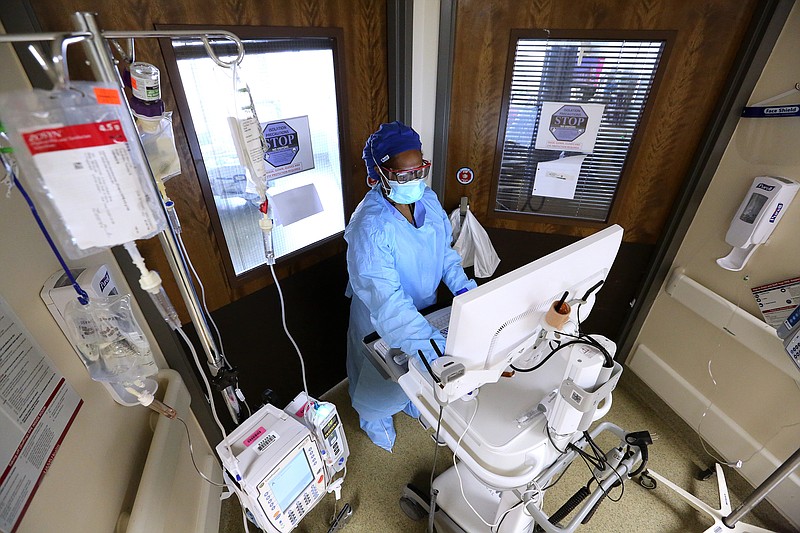 Nurse Takela Gardner looks over a patient's chart before entering a room in one of the Covid wards at University of Arkansas for Medical Science on Thursday, July 22, 2021, in Little Rock. .More photos at www.arkansasonline.com/725covid/.(Arkansas Democrat-Gazette/Thomas Metthe)

The number of covid-19 patients in Arkansas' hospitals fell Wednesday for the first time in four days as the state's new case number continued to decline.A day after it topped 12,000, the state's death toll from covid-19, as tracked by the Department of Health, rose by 11, to 12,028.After rising the previous three days, the number of covid-19 patients in the state's hospitals fell Wednesday by seven, to 289. However, that number, as of Wednesday, was still up by three compared to its level a week earlier and up by 31 from the two-month low it hit early last week.The state's count of cases rose Wednesday by 756. While larger by 121 than the increase on Tuesday, it was smaller by 263 compared to the rise the previous Wednesday.Declining for the eighth day in a row, the average daily increase in the state's case count over a rolling seven-day period fell to 575, the first time since June 11 it had been below 600.With recoveries outpacing new cases, the number of cases in the state that were considered active fell by 365, to 7,622, the smallest number since June 15.After not changing the previous two days, the number of the state's virus patients who were in intensive care rose by one on Wednesday, to 48.Growing for the fourth straight day, the number on ventilators rose by two, to 22, the largest number since July 30.