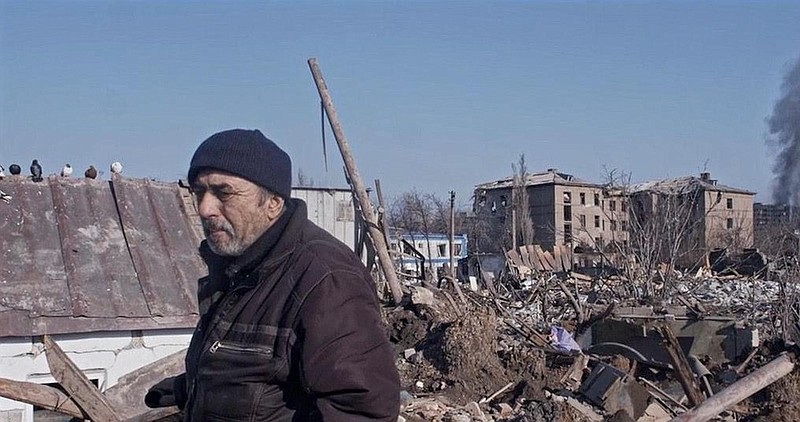 In this image from "Mariupolis 2," provided by the Hot Springs Documentary Film Festival, a man walks past some of the destroyed buildings in Mariupolis. The film is one of the selections for this year’s event. - Submitted photo

Films from Christine Choy and Brent Renaud, both of whom will be recognized at the Hot Springs Documentary Film Festival next month, are among the more than 100 films and shorts to be shown at the 31st edition of the festival.

"Who Killed Vincent Chin?", Choy's film about the murder of a Chinese American, and "Off to War," a film by brothers Brent and Craig Renaud documenting an Arkansas National Guard unit that went to Iraq, are both on the slate of films, the festival announced Friday.

The festival will open on Oct. 7 with the U.S. premiere of "Patrick and the Whale," a Mark Fletcher film documenting the world of whales, and it will conclude on Oct. 15 with Kathlyn Horan's "The Return of Tanya Tucker -- Featuring Brandi Carlile," which shows the rising music star writing an album about Tucker.

"This year's edition of the film festival will kick off our fourth decade celebrating the impact that documentary filmmaking has on us as we view our world through the lenses of these incredible filmmakers' work," HSDFF Festival Director Sheryl Santacruz said in a news release.

"Each year fills us with a renewal of enthusiasm and appreciation for the stories we get to experience in each screening, complemented by the participation of the artists and subjects themselves. The conversations, events, activities, parties, and more are going to make for a fantastic film festival and cultural event next month," she said.

Three films will be making their world premieres at this year's festival -- "Pasto Bueno," "Scout Master," and "You Have No Idea."

"Pasto Bueno," directed by Carlos Montalva and Alex Meza, shows a group of Peruvian and American miners searching an abandoned tungsten mine in Peru for gemstones.

"Scout Master," by Neil Collier, investigates the 1997 murders of three people in Lonoke that also revealed one of the largest sex abuse scandals in American history.

"You Have No Idea," directed by Alexander Jeffery and Paul Petersen, deals with Beth James and her autistic son, Evan, as she strove to "provide her son with a life filled with purpose and friendship," a news release said.

"Growing Up Grovey," directed by Quinn Grovey and Tracy Anderson, deals with the former Arkansas quarterback taking over as "the full-time caregiver for his mother, Bobby Jean, who was diagnosed with dementia and the onset of Alzheimer's disease in the fall of 2006."

Fazila Amiri's "And Still I Sing" will be making its U.S. premiere at this year's festival as well. It focuses on two women striving to become the first female winner of "Afghan Star," a popular reality TV show.

"Mariupolis 2," the final film by the late Mantas Kvedaravicius, shines a light on life in Ukraine during the current war with Russia. Kvedaravicius was killed by Russian forces while filming the documentary.

Choy is at the center of the U.S. Centerpiece film "The Exiles," directed by Ben Klein and Violet Columbus. It focuses on her rediscovering footage from an abandoned project she started in 1989 dealing with dissidents who sought asylum in the U.S. following the Tiananmen Square massacre.

This year's International Centerpiece film is "All The Breathes," by Shaunak Sen, which follows two brothers who are working to care for injured black kites, birds of prey that were believed to expel troubles.

Other films to be shown at this year's festival includes Bradford Thomason and Brett Whitford's "Butterfly in the Sky" about the beloved educational show "Reading Rainbow," Matthew Heineman's "Retrograde" about Green Berets and the Afghan officers they trained in the final months of the war in Afghanistan, and "Still Working 9 to 5," directed by Camille Hardman and Gary Lane, which examines the continuing inequality in the workplace for women and features Jane Fonda, Dolly Parton and Lily Tomlin.