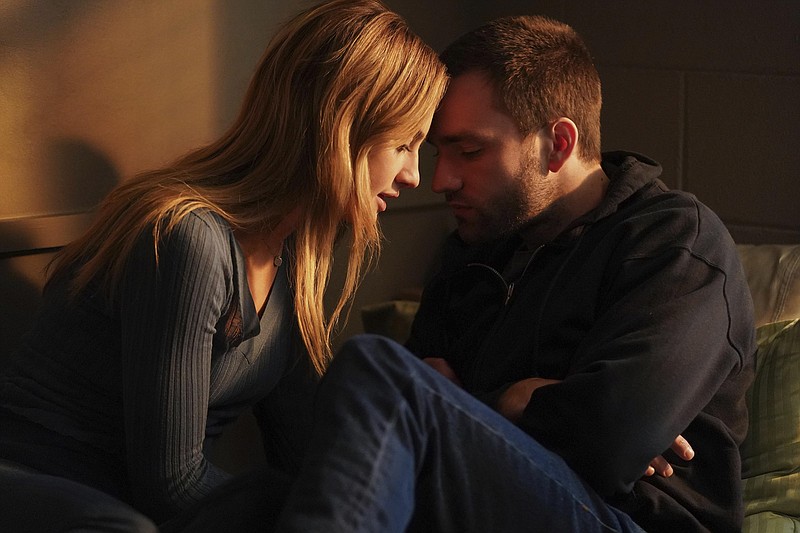 Grace Van Patten (left) and Jackson White appear in a scene from the series “Tell Me Lies,” now streaming on Hulu. (Hulu via AP/Josh Stringer)

There's a scene in the first episode of Hulu's "Tell Me Lies," where the character Stephen DeMarco — played by Jackson White — leaves the dorm room of freshman character Lucy Albright (Grace Van Patten,) where he comforted her after a tragedy. He's spent the night selling himself as a sensitive, charming guy who is very interested in Lucy. As he walks farther away the music changes and so does Stephen's expression. He returns to his dorm where his on-again-of-again girlfriend, Diana, (played by Alicia Crowder) is waiting for him.

And this is one of many moments where viewers may want to throw pillows or scream at the TV while watching "Tell Me Lies," a 10-episode series now streaming on Hulu with a new episode dropping on Wednesdays.

It's about a young couple who can't seem to stay out of each other's orbit. The series shifts time between their college days and years later when they're about to meet again after years apart. The relationship is especially hard on Lucy, who is often confused by Stephen's intentions, makes excuses for him and waits for his call or text message. The show's writing and White's performance highlight DeMarco's manipulation tactics.

"Tell Me Lies" is based on a 2018 novel of the same name by Carola Lovering but does not follow the book to the letter.

"I wanted to stay true to the emotional core and the emotional heartbeat of the show, which is really this feeling between these two people and that addiction and that infatuation and Lucy's isolation within that," said executive producer Meaghan Oppenheimer. "But in terms of the plot, I added a lot that is not in the book."

"When I finished it and I couldn't stop thinking about Lucy and Stephen," Preiss recalled. She recommended the book to Roberts who remembers Preiss saying, "I cannot get it out of my head." Roberts read it next and felt the same way. They decided to adapt it for television and took it to Hulu, who Roberts says "saw what we saw" and ordered it straight-to-series. Roberts and Preiss are co-executive producers.

Roberts says she's been pleasantly surprised at how fulfilling it is to create behind the scenes.

"I wouldn't be able to like look at myself in a show like this and be objective about it," she said. "It's very rare to to be excited to watch something when you already know what's going to happen. And I still get excited."

She also believes a big part of the appeal is that most people have found themselves in a unhealthy relationship of some kind.

"Whether it's romantic or friendship-wise, we can all relate to having a toxic relationship in our lives where it's not good for you, but you're not mature enough to verbalize that to yourself, so you kind of keep going down the rabbit hole."

"Anyone can have a Stephen," White said. "The Stephen is the person that gets under your skin and stays there for whatever reason, chemically, situationally, they fit with you in the wrong way and unlock a part of you and it stays there. It's the person you can't shake. That's Lucy and Stephen."

Playing someone both charming and calculated was exhausting, White said.

"There's so much going on with this guy. It's like putting on a backpack full of bricks," said White shortly after filming wrapped. "I finally feel like I can walk around and not have this thing on my back. He's someone who locks up, intellectualizes everything, compartmentalizes it, and then moves on and puts on something else. I am the opposite. I'm like an open book. I'm talking about everything. So it was really an exercise in staying still and quiet."

"I feel the need after every project to drastically change myself in order to say goodbye," she said.

Beyond Lucy and Stephen, Van Patten thinks the cast who makes up their group of fictional friends, including Catherine Missal, Spencer House, Sonia Mena and Brenden Cook, are also compelling to follow in their own right.

"There's a lot to kind of latch onto. I feel like everyone's going to find their character that they're invested in and relate to the most because it's kind of laid out for everyone to choose their player."

A second season of the show has not been announced but Preiss believes they have a case.

"This show has this thing that's kind of elusive, which is it's a will-they-won't-they? And it can go on and on," she said.