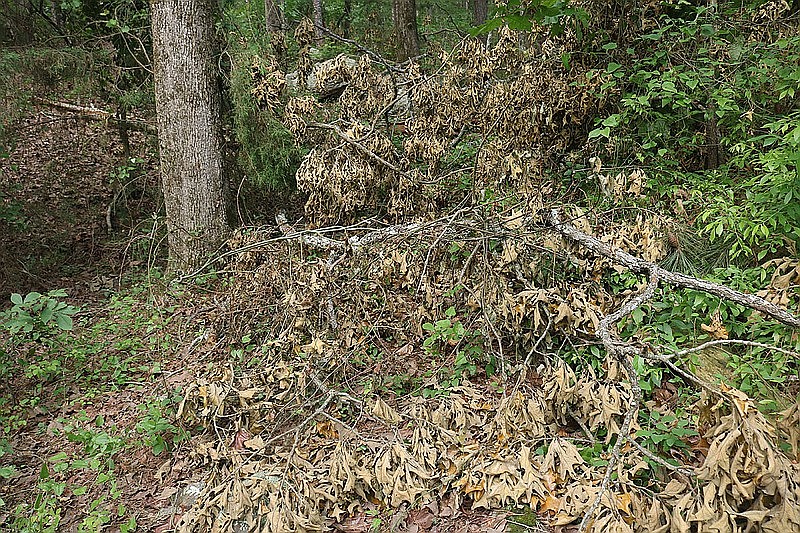 Trees along the Ouachita Trail stand bare with their branches cut off and dropped to the floor below. Nearby resident and founder of FamilyLife Dennis Rainey is under investigation by the Pulaski County Sheriff’s Office for criminal mischief in the damaging of the forest. (Arkansas Democrat-Gazette/William Sanders)

A Pulaski County circuit judge has rejected an effort by Christian author and marriage counselor Dennis Rainey to limit or bar prosecution testimony at his upcoming criminal trial about the value of a Central Arkansas Water tree grove Rainey ravaged to improve the lake view from his home.

Rainey's lawyer, David Parker, had called on Pulaski County Circuit Judge Cathi Compton to prohibit two prosecution witnesses from opining about the worth of the 111 trees that were either cut down or topped, which water authorities said were worth about $109,899.

The value is significant because it affects the level of the criminal charge against him. Rainey is charged with committing criminal mischief over $25,000, a Class B felony that carries up to 20 years in prison. If Rainey can show the trees had lesser value, or prosecutors can't prove to a jury the grove's worth, the charge would be reduced at trial. Criminal mischief is a Class A misdemeanor if the damage is between $1,000 and $5,000.

Rainey has admitted to the damage but denied criminal intent, stating he was given permission from the utility operators years ago. An author and podcast host, Rainey is president, chief executive officer and co-founder of FamilyLife, the biblical-based relationship-counseling center in Little Rock.

With his trial upcoming, Rainey's lawyers had asked the judge to bar two potential prosecution witnesses from opining about the forest's value, stating that neither is qualified to give an expert opinion.

In response, deputy prosecutor Robbie Jones argued the defense can't bar these witnesses since the Arkansas Rules of Evidence allow opinion testimony and leave the decision up to the jurors to decide what weight they want to give such evidence.

In her two-page decision, issued Tuesday, the judge said she'll allow the jury to hear from the witnesses given that the evidence rules specifically instruct jurors that, among other things, "you may disregard any opinion testimony if you find it to be unreasonable" and that they will be further instructed on how to gauge a witness' credibility.

In court filings, Rainey's lawyers accuse the water provider of grossly exaggerating the worth of the grove, pointing to an initial appraisal that valued the trees at $1,048, and that's if all of the trees died. Noting that the publicized value is 10,000 times the initial appraisal, the defense has referred to the difference as "innovative fundraising efforts."

Citing internal emails from David Johnson, the water utility's general counsel, and Blake Weindorf, its chief operating officer, Rainey accuses the water provider of using an employee "to come up with as high of a valuation as he could contrive," which the defense describes as an "amateur appraisal."

"[The utility] hired what is likely the most qualified, educated and experienced appraiser of tree damage in the state but was unsatisfied when the expert's findings did not provide the retribution they were seeking. After seeking multiple additional valuations, no expert would provide a higher appraisal of damages so they created their own," Rainey's attorneys state. "[Central Arkansas Water] has shown no interest in allowing [prosecutors] to treat this case like every other criminal prosecution, by letting the facts speak for themselves. With the help of the media and interested public, [utility] employees conspired to cause as much personal and professional damage to Mr. Rainey as they could contrive, and [this] 'appraisal' is the improper culmination of those efforts."

Rainey has told authorities that he had the swath of trees cut back to improve the view from his Roland home of Lake Maumelle and Pinnacle. He said he'd trimmed the forest twice before without complaint.

Rainey further told Central Arkansas Water commissioners that a representative of their predecessor company, Little Rock Water, had given him permission to do so.

The damaged grove on the Ouachita trail running alongside Lake Maumelle was discovered in mid-spring last year by a neighbor of Rainey's. Some of the timber had been cut down completely while other parts were mutilated. Rainey was charged after an investigation by sheriff's deputies.

Utility executives say maintaining the forest is crucial for the preservation of Lake Maumelle, which provides drinking water for more than 500,000 Arkansans.

Rainey's home sits at the end of Spillway Road on an acre that he and his wife, Barbara, purchased in August 2007, along with a neighboring 1-acre parcel.

The couple transferred ownership of both tracts of land to a trust established in their names last year, property records show.

CORRECTION: Pulaski County Circuit Judge Cathi Compton rejected an effort by Christian author and marriage counselor Dennis Rainey to limit or bar prosecution testimony at his upcoming criminal trial about the value of a Central Arkansas Water tree grove that Rainey ravaged to improve the lake view of his home. An earlier version of this story inadvertently omitted the name of the judge who issued the ruling.