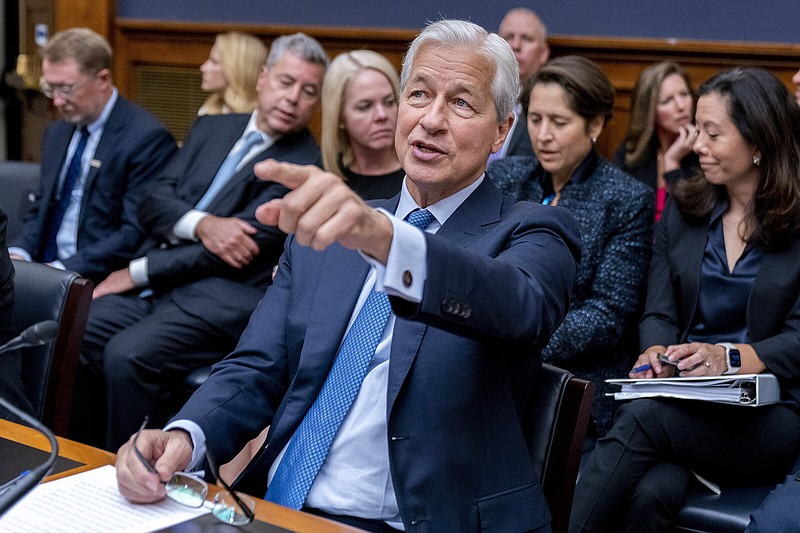 WASHINGTON — In what has become an annual ritual, the CEOs of the major U.S. banks appeared in front of Congress on Wednesday to sell themselves as shepherds of a helpful industry at a time of financial and economic distress for many Americans.

Democrats have called JPMorgan Chase & Co., Bank of America Corp., Wells Fargo & Co. and Citigroup Inc. to Washington to talk about pocketbook issues as households contend with the highest inflation since the early 1980’s.

“While covid is behind us, the economic challenges we are now facing are no less daunting,” said Citigroup CEO Jane Fraser, in remarks prepared for the hearing.

The Goldman Sachs Group Inc. and Morgan Stanley, which focus on investment banking, are not testifying this time. Instead, the CEOs of three new banks will testify: Andy Cecere of U.S. Bancorp, William Demchak of The PNC Financial Services Group and Bill Rogers Jr. of Truist Financial Corp.

Each of them run “super regionals,” banks that are huge in their own right, with thousands of branches and hundreds of billions of dollars in assets but are dwarfed in size by the likes of JPMorgan Chase, Bank of America, Citigroup and Wells Fargo.

While billed as a hearing on everyday finances, the CEOs are also likely to face difficult political questions with Washington in the midst of an election year.

Republicans are almost certain to use the opportunity to ask about the tracking of gun store sales, as well as whether banks should weigh in on hot-button social issues like student loan forgiveness. Democrats are likely to ask about Wall Street’s lending to oil and gas companies, racial and wealth equity issues, CEO pay and overdraft fees.

The first hearing is taking place before the House Committee on Financial Services, where Republicans quickly called into question the need for having the CEOs testify.

“It’s theatre, not oversight,” said Rep. Patrick McHenry, R.-N.C., the top Republican on the committee. “They’ve had two years to do oversight. Now we are a month before the midterms.” Many Americans still remember bailing out the banking industry nearly 15 years ago, so the bank CEOs typically use the annual platform to sell themselves as a force for good.

The Wall Street CEOs used their prepared remarks to talk about the current difficulties in the U.S. and global economies. Along with Fraser, JPMorgan Chase CEO and Chairman Jamie Dimon, gave a darker than normal outlook.

Dimon said that Americans are currently being “crushed” by inflation.

“The work we do at JPMorgan Chase matters, in good times, and particularly in tough times,” Dimon said in his opening remarks. “We finance Americans’ ambitions with loans for homes, autos, and growing a small business, and provide valuable products and services to more than half of American households.” Eager to avoid the political headache that comes with being labeled as part of “Wall Street,” the super regionals will use this hearing to sell themselves as a competitive alternative to the Wall Street mega-banks.

A series of mergers have brought increased scrutiny for the super regionals. U.S. Ban-corp’s U.S. Bank is currently in the process of buying MUFG Union Bank, the U.S. consumer banking arm of the Japanese banking giant. Truist resulted from the merger of SunTrust and BB&T and PNC bought the consumer banking franchise of Spanish bank BBVA.

“We are a responsible provider that works for American consumers and the economy as a whole,” Cecere of U.S. Bank said in his prepared remarks.

The head of Wells Fargo typically faces tough questions at these hearings because of the various scandals that cost the bank billions of dollars in fines and forced it to operate under the supervision of the Federal Reserve.

Wells Fargo CEO Charles Scharf said the bank has taken a number of steps to revamp its culture. But committee chair Maxine Waters, D-Calif., was doubtful, noting recent reports about the bank holding fake job interviews for women and having additional fines imposed upon it by financial regulators.

The CEOs will return Thursday to testify in front of the Senate Banking Committee.