One expects patients today after judge put ban on hiatus by COMPILED BY DEMOCRAT-GAZETTE STAFF FROM WIRE REPORTS | September 23, 2022 at 4:32 a.m. 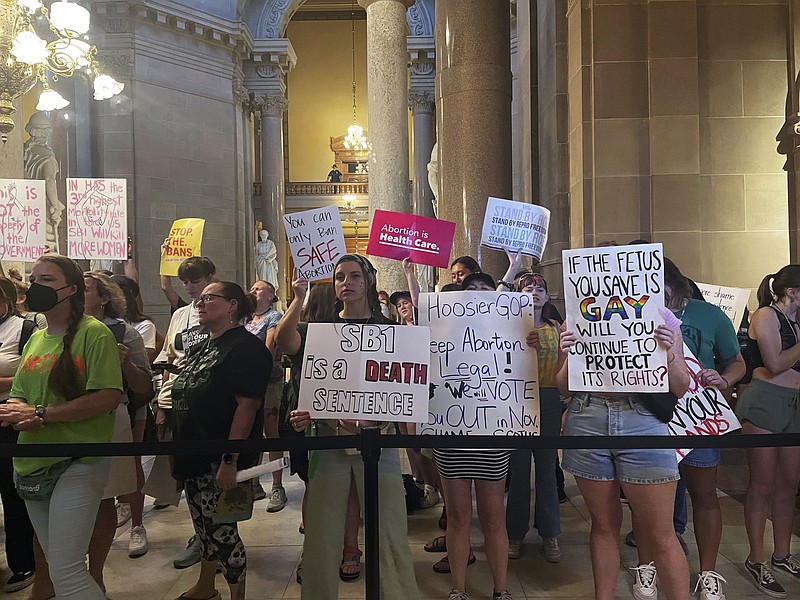 INDIANAPOLIS -- After an Indiana judge on Thursday blocked the state's abortion ban from being enforced, phones starting ringing across Indiana abortion clinics, which are preparing to resume the procedure a week after the ban had gone into effect.

"People are getting the word that abortion is now legal again, and people are ready to get their health care that they deserve and that they desire," Dr. Katie McHugh, an abortion provider at Women's Med in Indianapolis, told The Associated Press.

Owen County Judge Kelsey Hanlon issued a preliminary injunction against the ban, putting the new law on hold as abortion clinic operators argue in a lawsuit that it violates the state constitution.

Indiana's seven abortion clinics were to lose their state licenses under the ban -- which only permits abortions within its narrow exceptions to take place in hospitals or outpatient surgical centers.

The ban was approved by the state's Republican-dominated Legislature on Aug. 5 and signed by GOP Gov. Eric Holcomb. That made Indiana the first state to enact tighter abortion restrictions since the U.S. Supreme Court eliminated federal abortion protections by overturning Roe v. Wade in June.

The judge wrote "there is reasonable likelihood that this significant restriction of personal autonomy offends the liberty guarantees of the Indiana Constitution" and that the clinics will prevail in the lawsuit. The order prevents the state from enforcing the ban pending a trial on the merits of the lawsuit.

Republican state Attorney General Todd Rokita said in a statement: "We plan to appeal and continue to make the case for life in Indiana," calling the abortion ban law "a reasonable way" to protect the unborn.

"I had really hoped for this, but honestly, I didn't really expect it," she said. "So the fact that this is what happened is such a pleasant surprise and such a validation of what we have been saying this whole time."

Whole Woman's Health, which operates an abortion clinic in South Bend, said its staff members "are making plans to resume abortion care in the near future."

"Of course, this landscape of legal back-and-forth leads to disruption in patient care and uncertainty for our staff," said Amy Hagstrom Miller, president and CEO of Whole Woman's Health.

Indiana's ban came after the political firestorm over a 10-year-old rape victim who traveled to the state from neighboring Ohio to end her pregnancy. The case gained wide attention when an Indianapolis doctor said the child came to Indiana because of Ohio's "fetal heartbeat" ban.

An Ohio judge has temporarily blocked that state law, indicating he will allow abortions to continue up to 20 weeks' gestation until after a court hearing scheduled for Oct. 7.

With Indiana now on hold, bans on abortion at any point in pregnancy are in place in 12 Republican-led states. In Wisconsin, clinics have stopped providing abortions amid litigation over whether an 1849 ban is in effect. Georgia bans abortions once fetal cardiac activity can be detected and Florida and Utah have bans that kick in after 15 and 18 weeks gestation, respectively.

The Indiana ban replaced state laws that generally prohibited abortions after the 20th week of pregnancy and tightly restricted them after the 13th week. The ban includes exceptions allowing abortions in cases of rape and incest, before 10 weeks post-fertilization; to protect the life and physical health of the mother; and if a fetus is diagnosed with a lethal anomaly.

The White House and the American College of Obstetricians and Gynecologists said Thursday that a Republican-led proposal to ban abortion nationwide after 15 weeks would endanger the health of women and have severe consequences for physicians.

"If passed and enacted, this bill would create a nationwide health crisis, imperiling the health and lives of women in all 50 states," according to a preliminary analysis of the bill by Jennifer Klein, the White House Gender Policy Council chairwoman, that was obtained by The Associated Press. "It would transform the practice of medicine, opening the door to doctors being thrown in jail if they fulfill their duty of care to patients according to their best medical judgment."

President Joe Biden himself said at a fundraiser that some GOP efforts to ban abortion were more extreme than his own Catholic faith.

"I happen to be a practicing Roman Catholic. My church doesn't even make that argument," he said, referring to abortion bans that leave "no exceptions. Rape, incest. No exceptions."

Catholic teaching is that abortion is prohibited, though life-saving surgery for the mother is permitted, even if it means the baby will die as a result. The measure introduced last week by Sen. Lindsey Graham, R-S.C., proposes a nationwide ban that would allow for rare exceptions.

The federal legislation has almost no chance of becoming law in the Democratic-controlled Congress. GOP leaders did not immediately embrace it and Democrats are pointing to the proposal as an alarming signal of where Republicans would try to go if they were to win control of the Congress in November.

Many in the United States had believed the constitutional right to abortion, established by the Supreme Court almost 50 years ago, could never be overturned. But that protection was stripped away this year by the court's conservative majority, and advocates are leaving nothing to chance.

A majority of those questioned in a July poll by the AP-NORC Center for Public Affairs Research said Congress should pass a law guaranteeing access to legal abortion nationwide.

Information for this article was contributed by Tom Davies, Arleigh Rogers, Colleen Long, Scott Bauer and Aamer Madhani of The Associated Press.