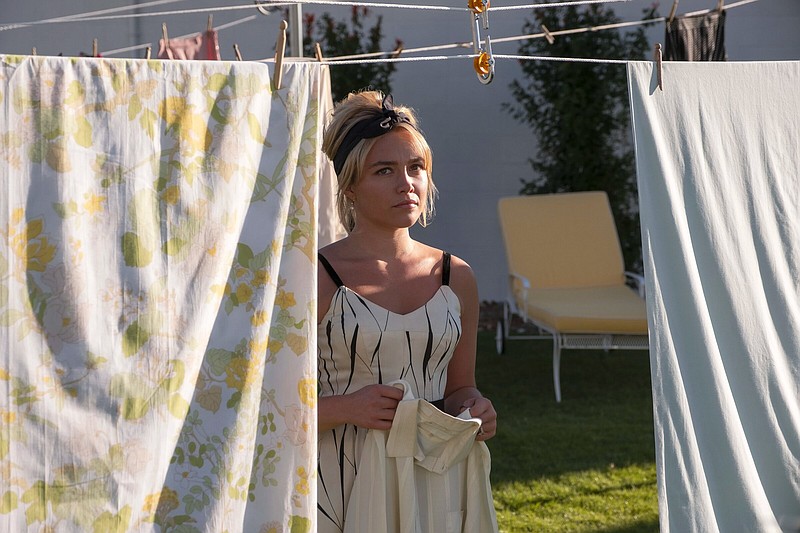 As much as I can condemn my peers for focusing on the unseemly things that might have happened behind the camera during and after the shooting of "Don't Worry Darling," I understand why they have done so. On-set affairs and actors bailing or getting fired make for great Twitter material, especially if your coverage is competing with the death of Queen Elizabeth II and Hurricane Fiona.

The backstage skulduggery is also easier to follow than the storyline for "Don't Worry Darling."

Screenwriter Katie Silberman and director Olivia Wilde are responsible for the witty, raunchy, imaginative and heartfelt delight "Booksmart." With their second effort, the two are clearly aiming for something different.

"Don't Worry Darling" has little to do with its predecessor, and for the most part, it's for the worse.

As the title implies, the anxiety Alice Chambers (Florence Pugh) experiences could be justified. In between naps during history class, you might have learned that Utopian communities have short lifespans. New Harmony, New Eden and Galt's Gulch, Chile disappeared pretty quickly.

Alice lives in the 1950s community of Victory, where dirt, grime and poverty simply don't exist. As the wives happily clean their homes and prepare dinners, their husbands all head for a workplace whose sole goal is to "make the world a better place." The vagueness of that mission raises the eyebrows of even the most compliant residents.

In Alice's case, her seemingly perfect husband, Jack (Harry Styles), may be gone during the day when he's on his nebulous mission, but every night he tenderly makes love to her. He even tries in vain to cook for her when he returns home early.

Victory is run by Frank (Chris Pine), the 1950s' version of a motivational speaker. If his emphasis on order and hierarchies makes him sound like a cult leader, perhaps the citizens should start talking to a good Realtor.

Actually, that doesn't seem to be an option.

Victory is surrounded by empty desert. Women are encouraged to take public transport and not to worry their pretty little heads about cars or the plane crashes that keep occuring just outside town.

Matthew Libatique's photography and Katie Byron's sets have created a world that's both idealized and unnerving. All of that sun and bright colors can't bode well.

Silberman and Wilde have learned some of the right lessons from "The Stepford Wives" and "The Truman Show," but their revelations for some of the anachronisms in the story seems sloppy and underdeveloped. Good movies sometimes leave viewers with questions, but less accomplished ones often do the same thing. Sometimes it feels like the filmmakers threw up their hands in the face of approaching deadlines.

Pugh played a similar role in "Midsommer," but she was better used in that movie because her character grew and changed as the film got weirder. Silberman and Wilde seem to have left their senses of humor behind. The constant dread feels monotonous, and only a sequence where all the Victory "company men" drive to work in a formation that resembles a drill team livens up this repetitive tale.

Pine seems to relish playing a midcentury Keith Raniere and almost makes the vacuous rhetoric he spouts seem temporarily profound. Curiously, one of the sequences that hints of the potential that "Don't Worry Darling" had occurs when Pugh is literally overwhelmed and squished by her surroundings.

The film doesn't give the cast (which includes ­Wilde) much to do other than blend in with the grimly shiny surroundings. Gradually, neither the residents nor the Hieronymus Bosch-like Hellscapes they inhabit remain interesting.

Perhaps Libatique's cameras should have faced the opposite direction. I can't tell which clickbait stories are true, but they are more entertaining and occasionally edifying than what's on screen.