Church of England more a missionary these days 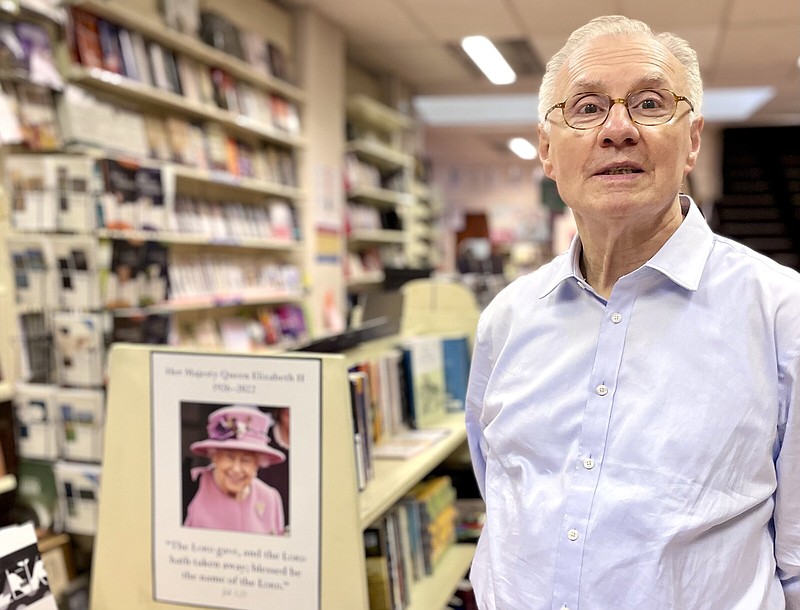 On Sept. 13, Protestant Truth Society Company Secretary George Rae — at the organization’s bookstore on Fleet Street in London — praised Queen Elizabeth’s Christian witness during 70 years as monarch, but expressed concerns about the health of the nation’s churches. Like many British businesses, the society had posted portraits of the sovereign, acknowledging her passing at age 96. (Arkansas Democrat-Gazette/Frank E. Lockwood)

LONDON -- It's easy to find churches in the heart of England's capital city; spotting churchgoers is harder.

"People are turning away from God. It's as simple as that," said Protestant Truth Society Company Secretary George Rae, as the nation prepared to bury its monarch earlier this month.

Like thousands of other British businesses and charities, the Society's bookstore on Fleet Street had posted a portrait of "Her Majesty Queen Elizabeth II," accompanied, in this instance, by a quotation from the book of Job: "The LORD gave, and the LORD hath taken away; blessed be the name of the LORD."

Just a few months earlier, the organization had published a commemorative platinum jubilee booklet, highlighting the queen's role as Defender of the Faith and lauding her "faithful and courageous witness."

Now, it was mourning the passing of its Most Gracious Sovereign.

"The queen, I believe, has been a stabilizing force in the country. We have heard that she is a queen of faith, a woman of faith, which I believe. She has influenced the church in many ways, but that has not, in my view, borne out by church attendance and so forth," he said.

British Christianity can be summed up in a single word, he said: "Lukewarm."

Today, fewer than 1 out of every 100 Britons worships at an Anglican parish on a typical Sunday.

Attendance also has fallen dramatically in the Church of Scotland.

St. Giles' Cathedral in Edinburgh saw a momentary spike in visitors this month, but only because it was the site of the queen's pre-London lying in state, he said.

"There have been more people through these doors, I believe, in the last 24 hours than in the last 10 or 15 years," he said.

These days, the church is viewed by many as merely a funeral venue, he said.

"We only hope that it will become a place for saving grace for many more people," he added.

Visitors to the United Kingdom encounter evidence of its Christian past. Steeples tower over the city streets, bearing witness to the faithfulness of earlier generations. Ecclesiastical bells provide aural reminders.

But inside, empty pews are the rule, rather than the exception.

The country that gave the world the King James Bible and exported missionaries around the world is now, itself, a missionary field.

"Cultural Christianity is certainly dying, though not completely dead in the UK," said Ryan King, an Arkansan serving as pastor of Grace Baptist Church Wood Green in London.

"Familiarity with the Bible or understanding of the Christian faith can no longer be assumed, if it ever could. The Church of England has seen sharp decline, with only 10% of its churches growing. This is true across the nation, particularly in Protestant mainline congregations that are more inclined in the direction of theological liberalism," he said in an email.

While the old, established church is struggling, there are areas that are bucking the trends.

"Churches that may variously be described in the data as 'evangelical', 'nontraditional', 'theologically conservative', 'Black-majority', and 'multicultural' are however statistically growing, even as conversely they become more marginalized socially," he wrote.

"... On the one hand the outlook is very bleak and even where there is growth evangelical Christian ministry here is very difficult and poorly resourced, lacking the generational wealth, assets, and social status of the established Church. On the other hand it is very hopeful, and the trajectory of authentic Christian faith and practice is a positive one."

Although she was the supreme governor of the Church of England, Queen Elizabeth made ecumenical inroads during her 70 years on the throne.

As her family was preparing for her private burial service at Westminster, Catholics were gathering at Westminster Cathedral for a Solemn Mass of Requiem.

The changing face of religion in the United Kingdom was also reflected in the Order of Service for Queen Elizabeth's State Funeral at Westminster Abbey.

In addition to representatives of the Church of England and Church of Scotland, the prayers were also led Monday by Cardinal Vincent Nichols, Catholic archbishop of Westminster; Canon Helen Cameron, moderator of the Free Churches Group; and Shermara Fletcher, Principal Officer for Pentecostal, Charismatic and Multicultural Relations at Churches Together in England.

But the widespread love for Queen Elizabeth, one street preacher said, made her faith suspect.

"I'm convinced, if our dear sovereign had ... truly been born again, we'd know about it," he said. "If you stand for the Gospel, people are going to hate you."

Love for the queen -- and admiration for her Christian witness -- were evident elsewhere around the city.

While grateful for the queen's example, he acknowledges that Christianity is a minority religion in his home country.

His goal, and the goal of those around him, is to spread the good news, he said.

Rather than holding Sunday services, St. Botolph's meets during the week, reaching out to young professionals who flock to the district to work.

Hostility to the gospel is not a new phenomenon, he said. The Puritans faced it; so did the founder of Methodism -- John Wesley, who claimed to have had his heart "strangely warmed" while seeking the Lord along Aldersgate Street.

Nearly 300 years later, St. Botolph's is working so that other Aldersgate souls will be kindled.

"We see ourselves as a mission outpost in the city," Martin said. "I see myself as a missionary, really, probably, more than a church leader."

Allistair Tresidder, a St. Luke's Hampstead vicar who appeared at St. Botolph's last week, said he doesn't know what will become of the Church of England, but he's confident that the church of Christ will prevail.

"God's got his plans. The gates of hell won't prevail against the Church, the real Church, so I have great hope," he said. 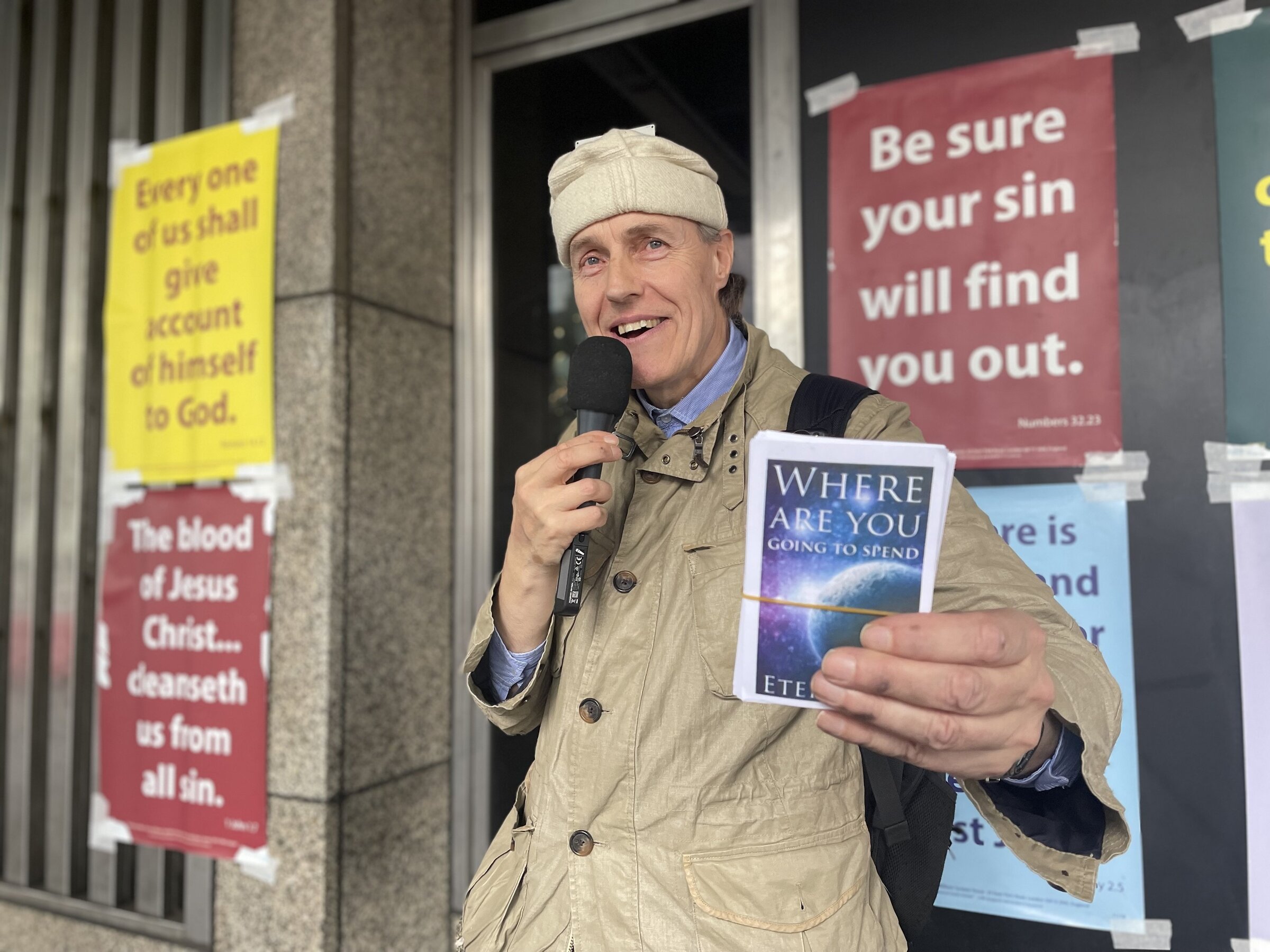 Queen Elizabeth II’s faith was suspect because it inspired love in her subjects rather than loathing, this London street preacher said. “If you stand for the gospel, people are going to hate you,” he added. (Arkansas Democrat-Gazette/Frank E. Lockwood) 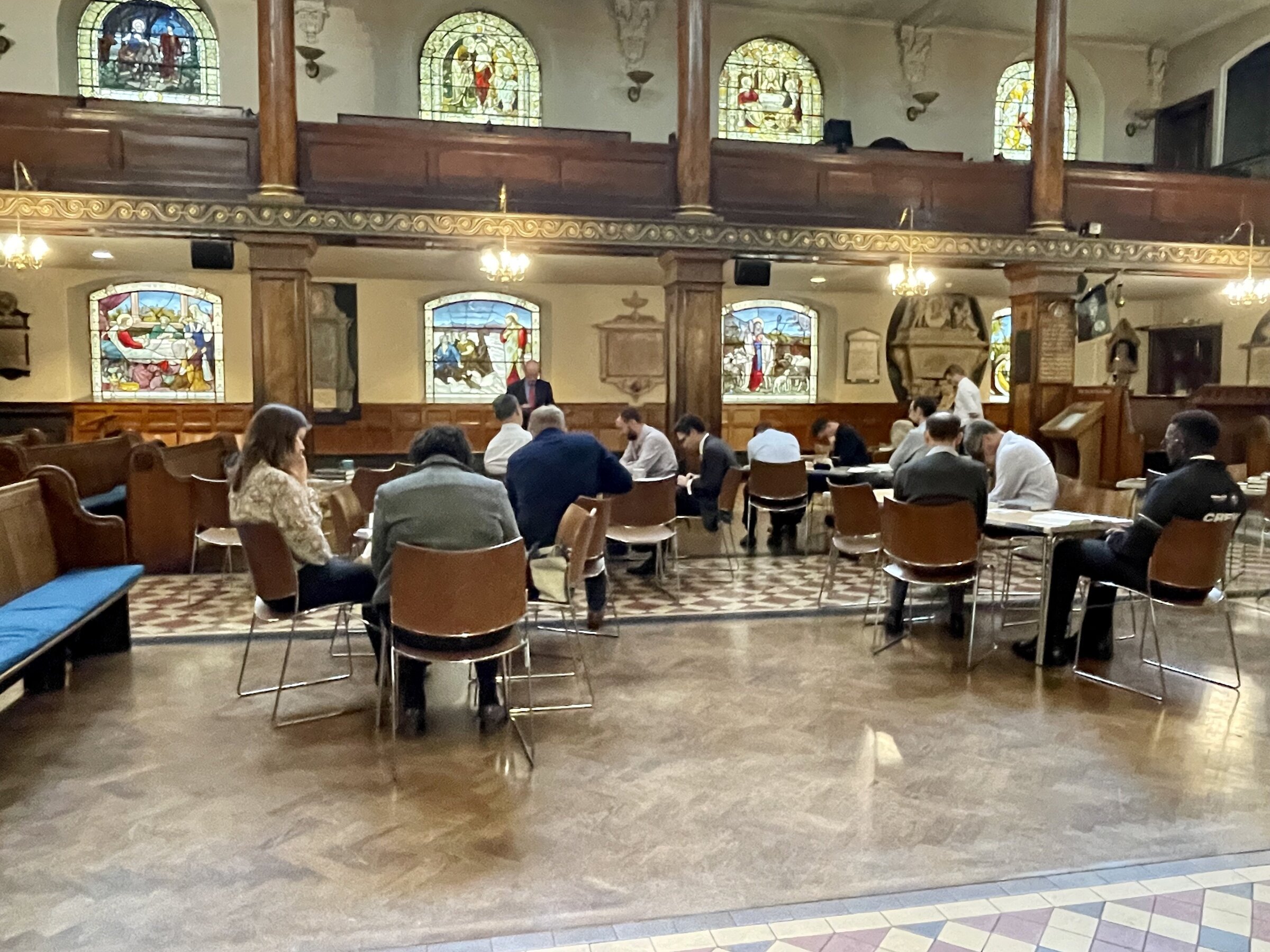 St. Botolph-without-Aldersgate, an Anglican church, focuses its ministries on weekdays, when the area is packed with workers, rather than on Sundays.