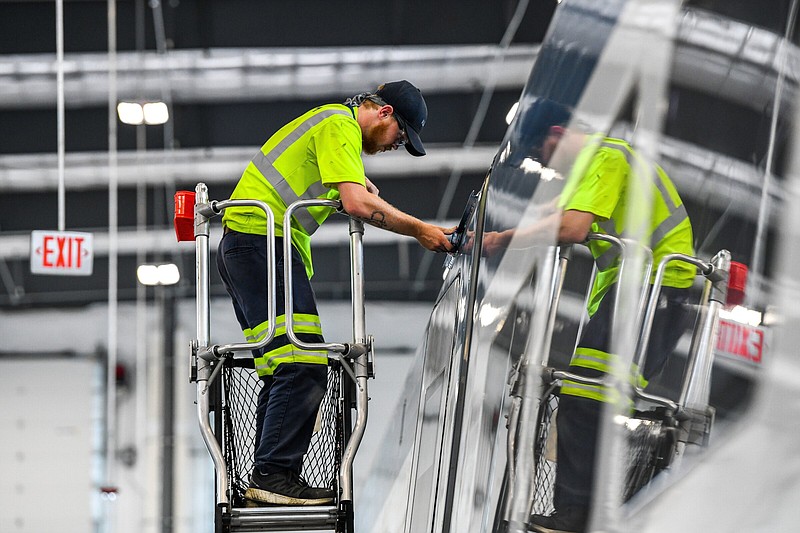 Alstom employee Caleb Alger replaces a gasket under the lights of a train. MUST CREDIT: Photo for The Washington Post by Heather Ainsworth.

HORNELL, N.Y. -- In a sprawling complex surrounded by hills, hundreds of yellow-vested workers are building the nation's fastest trains -- resembling the European-style rail cars that have largely been absent from American tracks.

The buzz of activity fills the Alstom manufacturing plant in this small western New York town, where concrete floors shine and the whizzing of drills echoes to the high ceilings. In every direction, Amtrak's most advanced rail cars sit in various stages of construction.

Their delivery will provide a pandemic-era boost to Amtrak, adding to momentum for a massive expansion backed by unprecedented political and financial support from Washington. With their aerodynamic white-and-blue exteriors, touchless doors, USB outlets and improved cafe cars, they are an upgrade from the 22-year-old vehicles they will replace.

The trains will be the fastest on the U.S. rail network. While built to reach speeds up to 186 mph, they are more likely to top out at 160 mph in small stretches of the D.C.-to-Boston corridor, outrunning legacy Acelas that travel up to 150 mph -- currently the nation's fastest passenger train.

Their speed, however, will be limited by the complexities of the 457-mile route, which is old, curvy and carries a mix of freight, commuter and intercity trains. Most Amtrak trains travel between 110 mph and 145 mph in the corridor, depending on the track and proximity to stations.

Three years after manufacturing began, Train 15 was the latest to reach the end of the production line late this summer inside the 137-year-old shop. Alstom, a French train manufacturer, expanded the complex into a massive operation, so far delivering four train sets that will carry passengers in fall 2023.

Modeled after speedy French TGV trains, the new Acela sets are the first to be built under a Federal Railroad Administration rule establishing new safety standards for high-speed trains, with design specifications that allow them to share tracks with slower trains. Railroad officials say the trains also are going through more rigorous testing requirements.

The first two sets of the 28 Avelia Liberty high-speed trains had been expected to enter Acela service in spring 2021, but that schedule was affected by delays in production and supply chain issues. Early testing also led to the discovery of compatibility problems with tracks, prompting modifications to the train design.

New train features should help to shorten trip times, if only by a few minutes, in part because of a Northeast U.S. rail network that is 180 years old in some places.

Top speeds of 160 mph will be reached only along 34 miles in Massachusetts and Rhode Island, with another 16 miles in New Jersey. Ongoing track enhancements between D.C. and New York will allow the new trains to travel 10 mph more quickly in segments with a 125 mph speed limit. Signal upgrades at various locations could eventually boost speeds from 45 mph to 80 mph.

Other upgrades will allow trains to tilt as they go through curves at speed, reducing the need to slow down. Adjoining coaches will share a single wheel assembly, minimizing bouncing and improving stability and safety.

"Even if our top speed isn't changing through certain sections of track, what we're doing is going faster through those curves in a more comfortable way, which will ultimately allow us to reduce the trip time," Mason said.

Future capital projects such as tunnel and bridge rehabilitations would allow higher speeds in the future, officials said, bringing Amtrak closer to a goal of dropping the D.C.-to-New York trip from just under three hours to just over two hours. But when the new trains enter service, travelers initially can expect to save a little more than five minutes on a trip from Washington's Union Station to New York's Moynihan Train Hall, with similar savings from New York to Boston.

Amtrak's investments in the Acela fleet -- which predate a massive infusion of federal infrastructure funding for rail last year -- aim to grow its most lucrative line. Before the pandemic, the service's ridership grew 4.3% in fiscal year 2019 compared with the previous year, higher than growth rates on other Northeast Corridor lines and on state-funded routes nationwide.

Alstom officials said some of the train's features will debut in the United States before Europe, including touchless doors and spacious restrooms with a 60-inch diameter turning radius, which exceed accessibility requirements.

A top producer of rolling stock in Europe, Alstom has been expanding operations in Asia and North America while broadening to manufacture automated people-mover systems at major airports. The company, with more than 74,000 employees, is also testing autonomous train technology and recently created a hydrogen-powered rail line in Germany.

On this side of the Atlantic, Alstom uses materials from 250 suppliers in 27 states, in compliance with a "Buy American" rule in its $1.8 billion contract with Amtrak. Power systems such as transformers, pantographs, gears and batteries are shipped from Virginia, South Carolina and New Jersey, respectively. Axles and wheels are made in Kentucky, Illinois and Pennsylvania. The power car shells were built in Michigan.

The company obtained a waiver to import passenger car shells, which are made at an Italian Alstom plant and brought to Hornell -- population 8,000 -- through the Port of Baltimore. The type of shells being used for the project aren't produced in the United States, project officials say.

The aluminum shells are lighter than traditional steel or stainless steel, decreasing train weights and reducing maintenance needs, according to Amtrak. The trains are also 20% more energy efficient.

On a recent workday, Trainset 15 was at the end of the production line at Plant 1, the center for new rolling stock manufacturing and testing.

The assembly begins at Station Zero with car body shells. Crews start on the power cars that will tow the passenger cars and install the crash management system, which looks like bumpers. The driver's desk is assembled a few steps away, with cables, plugs and gear shifts visible before installation. The power car is built with a single-pane windshield, eliminating a divider at the center while increasing visibility for the engineer.

Crews also work on the cafe car. It is being built to include refrigerated racks for grab-and-go food, a standing-room area, electrical outlets for charging and digital screens.

"We have a significant amount of equipment that needs to be installed ... heating systems, cooling systems, commercial refrigeration, coffee makers, quite a bit of passenger interaction systems that have a very precise nature to them," Heulitt said.

Moving along the production line, crews work on passenger cars, adding windows -- larger than those on the legacy Acela trains to allow more light -- before moving to the station where restrooms, the air conditioning system and the roof are mounted. Then crews are ready to install walls and carpet.

The work requires hundreds of parts, of which piles of equipment are lined along the massive shop floor -- from wall panels to restroom doors, cables and nails. Each phase of production goes through an inspection involving independent reviews by Alstom and Amtrak quality control members.

It has taken about 10 months to deliver a train during the early stages of production. As the production ramps up and more trains have been tested, the process is speedier.

Once a train has passed inspection, "the life of the equipment starts," Heulitt said. "We've gone through our respective quality processes, validated through the functional testing. The equipment is good to operate and now we proceed."

The Federal Railroad Administration is deeply involved in this phase of testing, training and computer simulation before approving passenger operations.

Railroads have been part of Hornell's fabric since Erie Railroad arrived in the mid-1800s, connecting New York City with western New York and establishing repair shops in the city. The industry is still the city's largest employer, with more than 700 workers at the Alstom complex.

"We're literally the place in the United States of America that produces high-speed rail," said Mayor John J. Buckley, a Hornell native whose office is decorated with images of the old train depot in the heart of town. "If your city is looking to expand to high-speed rail or to refurbish existing [rail] cars, Hornell is the hotbed of that."

Over the years, this city of maple trees surrounded by farmland -- filled with corn and potatoes, and a large dairy farm outside its boundaries -- has had other manufacturers. A silk mill, a distillery and a Coca-Cola bottling company came and went, leaving rail as the mainstay. Most families have deep ties to the industry.

Alstom says it has built more than 1,000 train cars and overhauled more than 4,300 in Hornell. The company is one of the primary providers of traction motors and hardware required to put trains into motion for New York City Transit. It has overhauled trains for the New York subway and Washington Metro system.

The Amtrak contract in 2016 was a game changer for the city and the company. It revived the industry after Alstom -- which delivered subway cars to New York in 2010 -- was nearly forced to shutter operations in Hornell. The company kept only 25 workers to maintain the facility.

"The industry has had peaks and valleys," said Buckley, whose grandfather worked in the Erie Railroad shops.

Now, Alstom is at the peak of its Acela production and has secured another 10 years of work through a $775 million contract to build commuter trains for the Chicago area. Its Hornell site, which is 885,000 square feet -- larger than 15 football fields -- is growing as the company is building a fourth plant in town that would become Alstom's shell manufacturing facility.

"They've been adding infrastructure in the city over the years, positioning themselves for future contracts and future growth," Buckley said. "Obviously that has a significant economic impact here in the city of Hornell."

Back in the plant at the end of the production line, fully assembled trains are put through testing in "operational" mode to simulate a train in service. The trains then depart Hornell for Philadelphia, where Amtrak is conducting more testing.

As of this month, the second rail car manufactured for Acela, Train PS02, has traveled 35,000 miles during testing along the Northeast Corridor. As more trains leave the production phase, testing and training will intensify, said Michelle Tortolani, who oversees the Acela program at Amtrak.

"Once we get FRA approval, that testing expands to the speeds that it will travel -- all the way up to the max operating speed of 160," she said. "Training will really start to ramp up in spades."

Sparky Hewlett, 29, grew up near the Hornell plant and runs a small eatery where he makes milkshakes, burgers and sausages. He said lunch traffic has doubled in recent years as Alstom's finances have brightened.

Around the corner, a new Acela train sits outside the old train depot, now a museum packed with artifacts from the Erie Railroad. 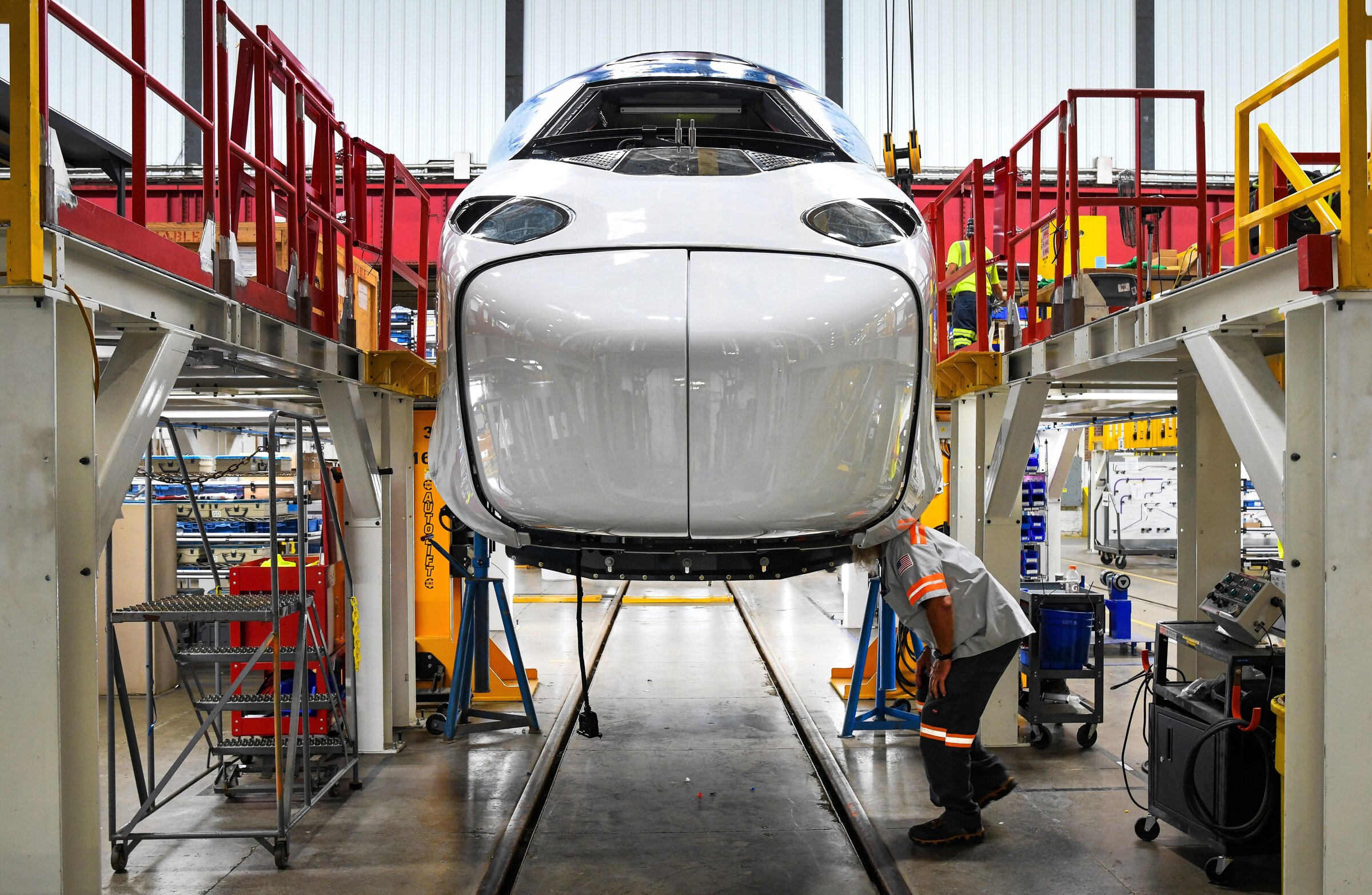 An Amtrak Acela train is assembled at the Alstom production facility in Hornell, N.Y. MUST CREDIT: Photo for The Washington Post by Heather Ainsworth.