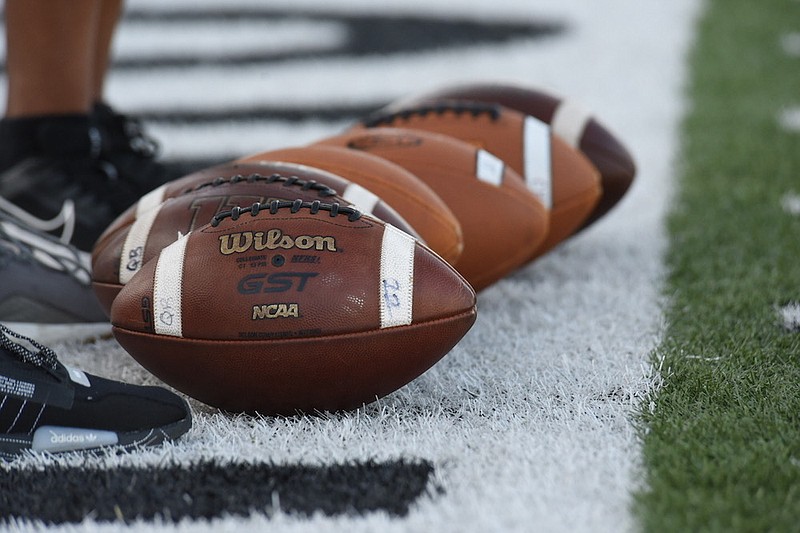 High school football tile - from the Calhoun-McCallie game before the start of a game. / Matt Hamilton

In 2021, Camron Williams was a sophomore running back fighting for snaps behind his older brother on a one-win team.

In 2022, Williams is one of the top high school wide receivers in Arkansas, a ballhawk at safety and is leading an undefeated Gosnell (4-0, 1-0 4A-3) squad.

On Friday against Highland, Williams put together everything he'd learned in the past year to lead Gosnell to a dominant 48-14 win.

The junior had 6 catches for 169 yards and 3 touchdowns in his most prolific game since moving to receiver.

On defense, he had 6 tackles, 2 pass breakups and returned 2 interceptions for touchdowns to earn himself the Arkansas Democrat-Gazette Player of the Week honor.

"It was probably one of the best games that I've ever witnessed a high school kid have," Gosnell Coach Lewis Earnest said.

"He single-handedly dominated the receiving game. For us coaches, it sure makes it easy when we can just throw the ball anytime and we know he's gonna go up and get it, it doesn't matter. Most teams are double-covering him now, and he's still finding room to go get it. ... He's one of the best wide receivers in the state."

Through four games, Williams has totaled 19 catches for 458 yards and 7 touchdowns. Defensively, he has 25 tackles and is tied for the state lead with four interceptions.

Williams plays as an outside receiver as well as safety for Gosnell -- that is unless the scouting report calls for him to key in on the opponents' top receiver.

"It's a blessing for us to have such a good athlete that can open up your passing game and shut down the opponent's passing game," Earnest said.

Williams' brother, Floyd III, is a year older and Gosnell's leading rusher in 2022. So, Earnest and his coaching staff knew they wanted to move the 6-1, 175-pound Camron to wide receiver -- a position they felt suited him more.

The transition required 6 a.m. passing drills throughout the spring semester, followed by summer workouts and 7-on-7 camps -- both of which Earnest said Williams finished with perfect attendance.

Earnest said all of that work has shown in Williams' play.

"He had a monster summer in 7-on-7 and stuff like that, so we knew that he had it in him," He said. "He's been developing and growing and getting stronger and faster all summer long. ... He's showing he should get looked at in the state as one of the top receivers."

Floyd Williams has seven Division I scholarship offers to play football, including ones from the University of Central Arkansas, Alabama State and Austin Peay. Earnest is hoping performances like Friday night will soon have calls coming in for Camron as well.

"If I was a college coach, Cam would be the first one I come get," he said. "... I'm texting college coaches and calling them, and I'm just like, 'You gotta get in here and see this kid.' "