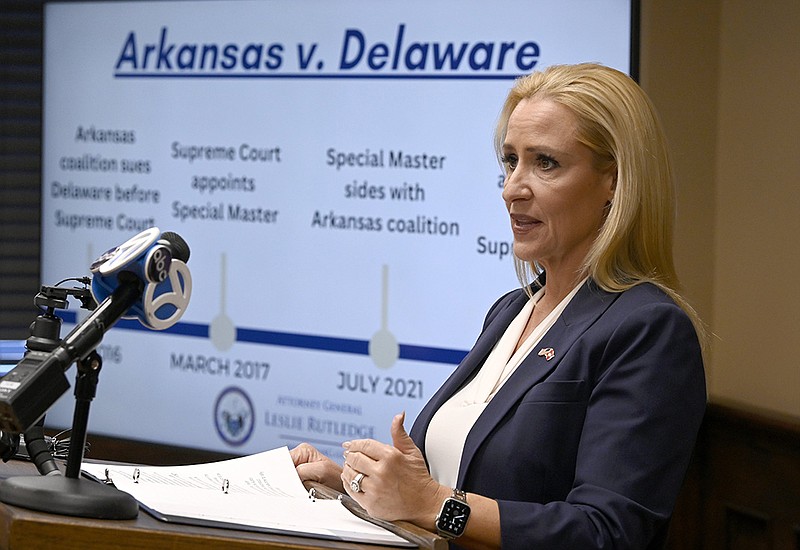 The U.S. Supreme Court will hear oral arguments Monday for a case where Arkansas and 28 other states will try to take back $250 million in unclaimed money from the state of Delaware.

In 2016, Arkansas sued Delaware claiming it worked with the payment transfer company MoneyGram Inc., to route unclaimed money orders or checks into Delaware's coffers. Arkansas, along with attorneys general representing 28 other states, argues the unclaimed funds should go to the states where they originate instead of Delaware, where MoneyGram is incorporated.

Arkansas Attorney General Leslie Rutledge said the lawsuit was to "protect our assets, particularly from another state." Rutledge said Delaware used the unclaimed assets to help fund its budget.

Under federal law, unclaimed money orders are to be returned to states where they originated but checks don't have to be, Rutledge said.

"Delaware colluded with MoneyGram to ensure that money orders that were re-branded as official checks were returned to one state in particular -- the state of Delaware," Rutledge said.

At dispute is the difference between a money order and a check. MoneyGram offers transfer services for both money orders and official checks.

Under the Federal Disposition Act, states are "entitled to the proceeds" of unclaimed money orders and traveler checks that originated in their state. Delaware asked MoneyGram to turn over unclaimed official checks to Delaware, where the company is incorporated, according to Rutledge.

"I am proud the AG's office joined us in this fight for Arkansas' money," Lea said in a statement. "We look forward to this 7-year-long issue concluding with a favorable opinion from the Supreme Court."

"MoneyGram is not a party in this case nor will the outcome have any financial impact on MoneyGram," a spokesperson for MoneyGram said in a statement. "MoneyGram takes no position on which party should win or what the Court should decide, but the Company does have an interest in the law being clear and not being subjected to multiple, conflicting state claims for the same property.

The case will be among the first argued in front of new Associate Supreme Court Justice Ketanji Brown Jackson, whom President Joe Biden nominated to the court in February.

Arkansas could receive $650,000 if the U.S. Supreme Court rules in its favor, according to a June news release from the attorney general's office. The coalition of 29 states suing Delaware is led by Arkansas along with attorneys general from California, Texas and Wisconsin.