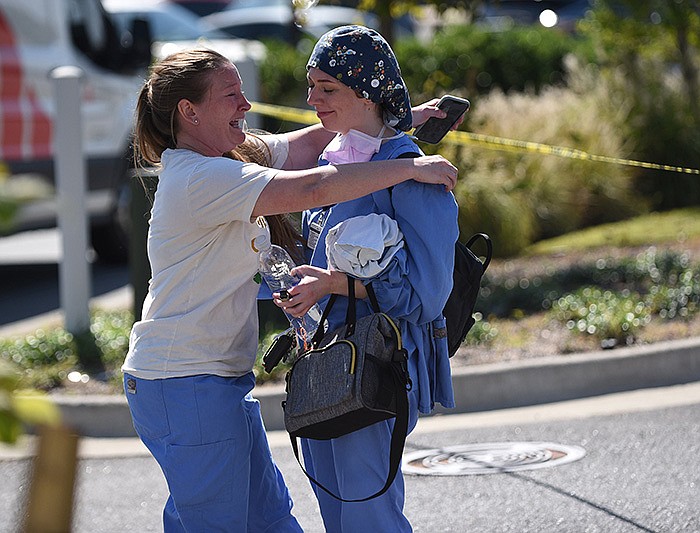 Two women embrace each other as law enforcement officers respond to reports of a gunman Wednesday at CHI St. Vincent North in Sherwood. More photos at arkansasonline.com/929stvincent/. (Arkansas Democrat-Gazette/Staci Vandagriff)

A Sherwood hospital was partially evacuated, placed on lockdown and surrounded by a police perimeter for almost three hours on Wednesday morning after a fatal shooting on the fourth floor, where the victim was visiting a patient, police said.

Just over an hour later, Little Rock police took Raymond Lovett, 24, of Little Rock into custody at Zimmerman's Exxon, 5223 S. University Ave., after being alerted that a suspect in the shooting was at the gas station.

Hagar said Lovett was turned over to his department, where he was being held Wednesday afternoon. A news release from the Sherwood department Wednesday night said Lovett had been charged with capital murder and aggravated assault.

"I would like to personally say that our sympathy goes out to the family of the victim," Hagar said at an afternoon news conference at the Arkansas State Police headquarters.

"It was a terrible thing that happened.

"I would also like to tell everybody that's out there that this is not an act of terrorism... The suspect and the victim, they knew each other. It appears to be an isolated event that just happened to take place in a public facility."

The shooting prompted the evacuation of many patients and employees, although medical personnel on the hospital's second floor continued on with two surgeries that had already started, CHI St. Vincent CEO Chad Aduddell said.

"Our people have been trained for an active shooter situation, so co-workers are aware to either run, hide or fight, and to some degree, at least, run and hide were tactics that were utilized," Aduddell said at the news conference.

"We did have multiple surgeries, complex, difficult surgeries, that continued on as the incident was unfolding because they weren't at a time during the surgery where they could stop, and the staff and the surgeons made that decision in the best interest of the patient to continue."

He praised the "unbelievable response" by police from several agencies and bravery of employees who continued to care for patients.

The hospital will reexamine its security protocols in light of the shooting, he said.

"We'll continue to drill," he said. "We'll continue to take all the precautions we can, but, as described, it's a hospital. There's many visitors coming in and out of our facilities every day, and so it's just a tragic situation."

For almost three hours after the shooting, a large area around the hospital was cordoned off with police tape as hospital workers, some wearing blue scrubs, and relatives of employees and patients gathered in the parking lot of a nearby Academy Sports store.

Among them was Jason Caldwell, whose father was at the hospital for surgery.

"They can't get out of there right now because they are barricaded in the surgical room," Caldwell said around 11:30 a.m.

Caldwell had been in a second-floor waiting room when he heard over the intercom that there was an active shooter on the fourth floor.

He hid with his wife, mother and four other people in a bathroom while more announcements alerted patients and staff that the situation was not a drill.

A few minutes later, police officers going door to door told them to stay put. Then a crew came to evacuate them.

"We knew it was on the fourth floor ... so I was calm," Caldwell said of the shooting.

"You see this on TV, and it just brought back to reality that there is evil in this world, and it shows its dirty head from time to time."

Sean Lampley, an information technology engineer at the hospital, said he was on the first floor when a friend who works in radiology sent him a text message alerting him about the shooting.

He stuck his head out of the room where he had been working and heard the announcement on the intercom: "Active shooter. This is not a drill."

"I actually didn't know what to do honestly," Lampley said. "I didn't know if I should barricade myself or run."

Then, he said, he saw coworkers running for the exits, and he did the same.

"I took off after them, came out in the front parking lot, and we just saw the theatrics start. Officers, SWAT, and staff coming out of the hospital," Lampley said.

Around noon, Nichole Morgan was closely watching her phone for updates from her daughter, a physical therapy technician at the hospital who was barricaded in a closet.

She said her daughter began texting shortly after the shots were fired.

A man who declined to give his name said his wife, a nurse, was also barricaded inside.

He said she was in an operating room with about two dozen other people, including health care workers and patients, with medical equipment pushed against the door.

"It's where they were doing surgeries," the man said. "They can't stop."

Naomi Castaneda, 36, and her mother, Leslie Brown, 54, both of Russellville, left the hospital about 9 a.m. after taking Brown's mother, Bobbie Haag, there for neck surgery.

They were at a hotel when the surgeon called at about 11 a.m., just after the surgery, to tell them there had been a shooting.

"Her doctor was concerned that we might have been in the hospital at the time, but luckily they both told us to go ahead and leave and they'd call us," Castaneda said.

She said her grandmother had already been put under anesthesia when the lockdown occurred. Early Wednesday afternoon, Haag was still in the operating room, waiting for a hospital room.

"She doesn't know anything about what's going on, thank God," Brown said.

Cynthia Fuller and Debra Hicks said they had traveled 125 miles to visit a relative who was in the hospital.

"My son is in there," Fuller said while waiting outside the police perimeter. "We came all this way and came up on this. All we could see is staff running."

At On the Border restaurant next to the hospital, manager Zach Johnson said he was getting ready to open when five or six nurses knocked on the door at about 10:15 a.m.

"They just told me there was an active shooter, and that they were evacuating the hospital," he said.

Information for this story was contributed by Alexandria Brown, Remington Miller and Grant Lancaster of the Arkansas Democrat-Gazette. 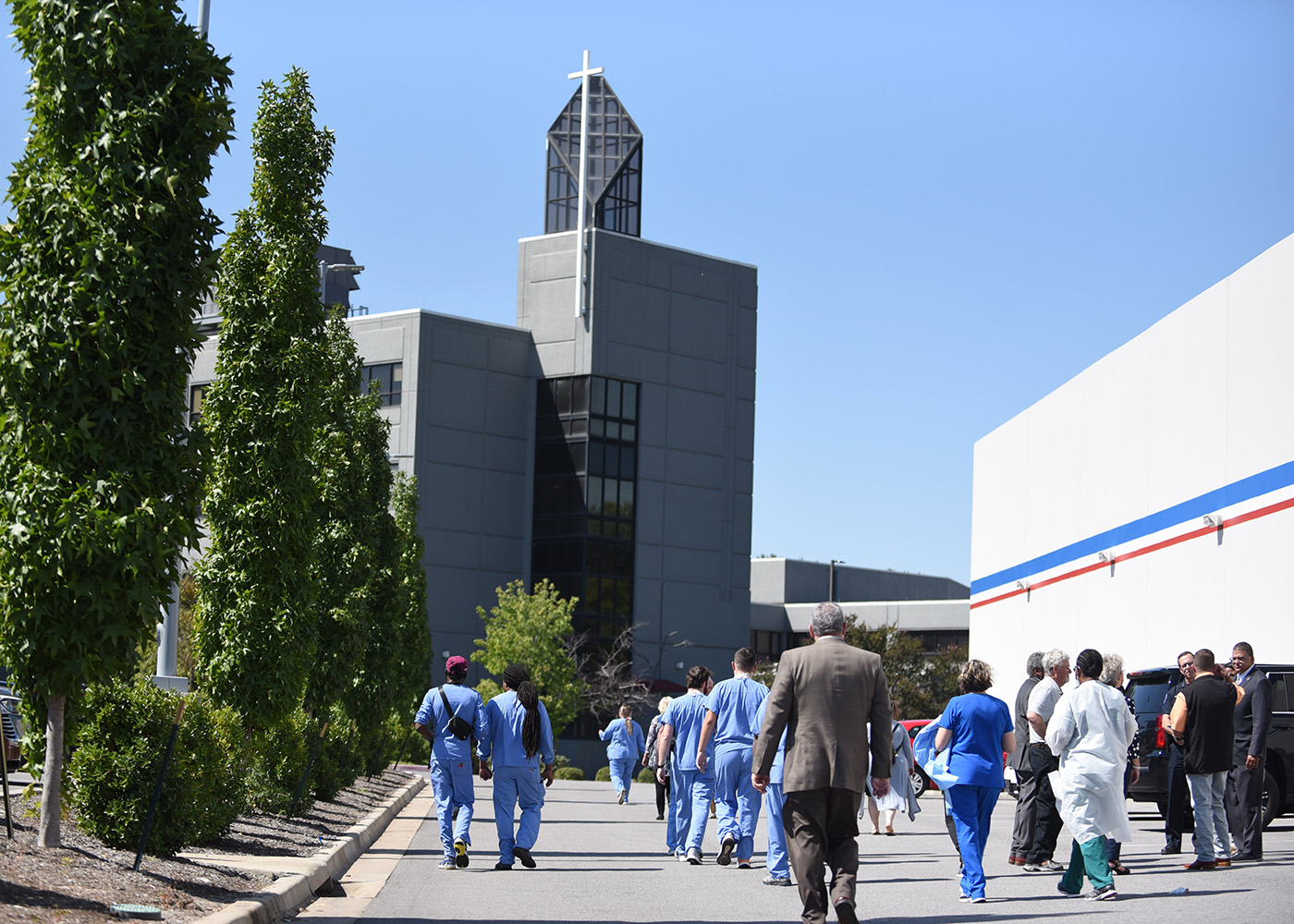 Hospital staff head back inside following an active shooter Wednesday at the CHI St. Vincent North in Sherwood. One person was killed in the shooting and another person was arrested. (Arkansas Democrat-Gazette/Staci Vandagriff) 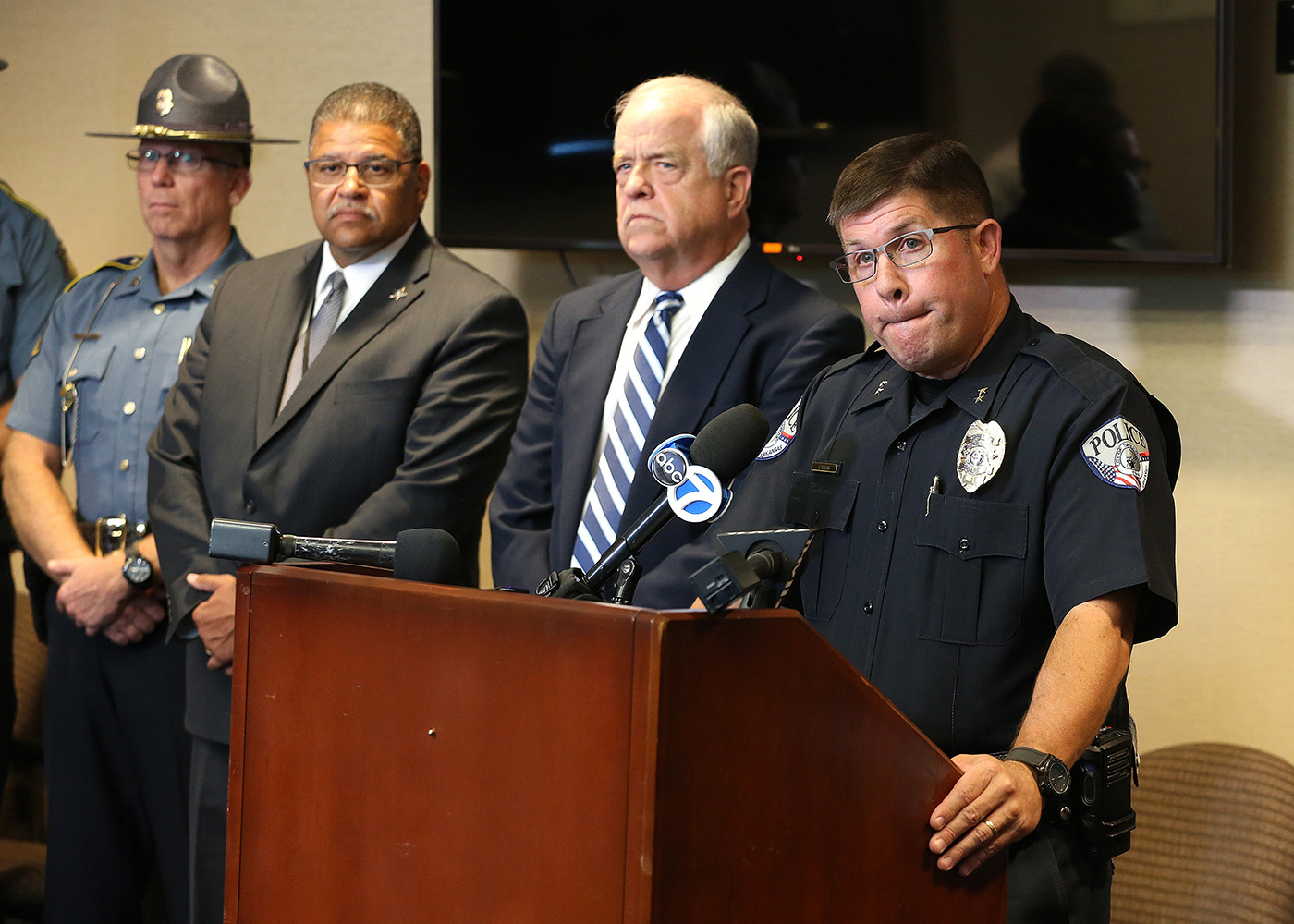 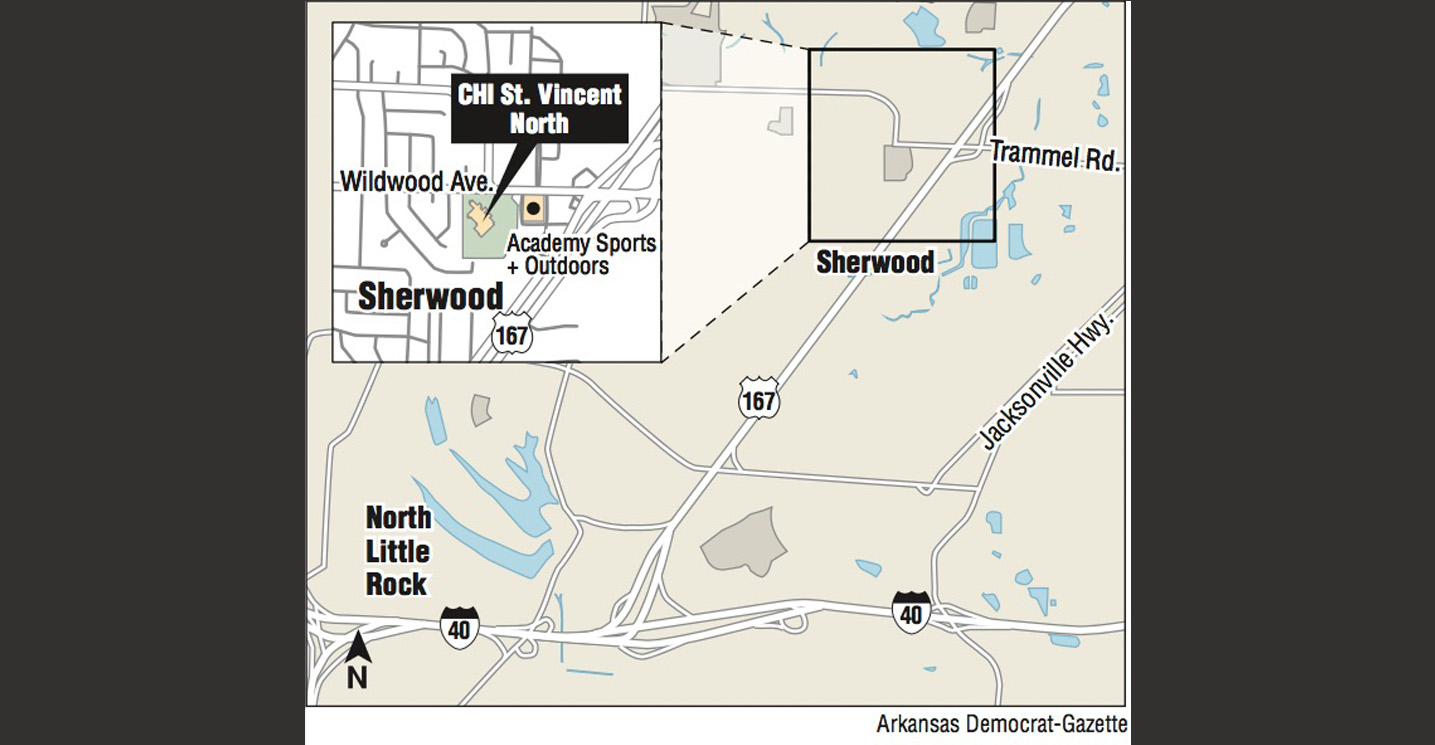 A map showing the location of CHI St. Vincent North in Sherwood.