RESTAURANT TRANSITIONS: West Little Rock to get what burger fans ask for; Bagel Shop to set up for lunch at taproom 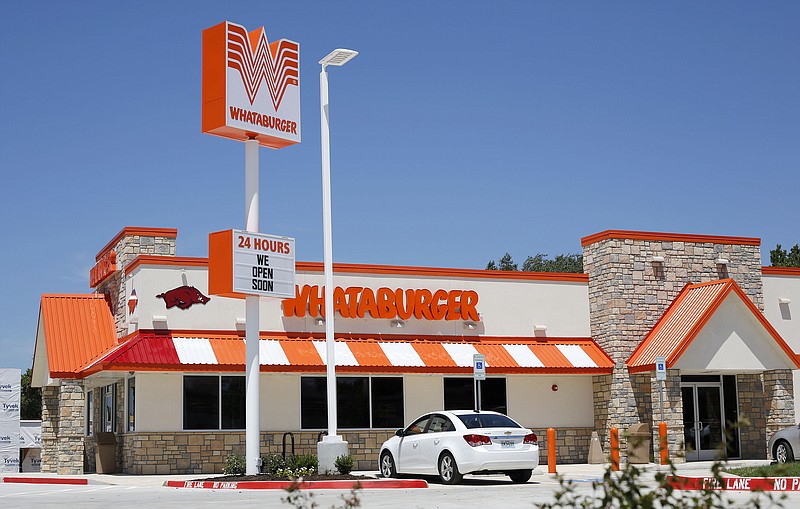 Speculation started right after the confirmation that Whataburger would have an outlet at 7520 Alcoa Road in Benton that the burger chain had its eye on a possible Little Rock location. Behold, Indiana-based contractor TMG Construction Management Inc. has posted on its website, tmgcm.com/whataburger-little-rock-ar, that that Little Rock Whataburger is, in fact, set for 17100 Chenal Parkway, on a plot just east of the Centre at Chenal. That center, 17200 Chenal, houses several restaurants, including Chi's Chinese Cuisine, a Domino's Pizza outlet and the recently opened Kemuri West. There's no opening date yet. A preliminary plat filed with the Little Rock Planning & Development Commission (tinyurl.com/3xnvnny8) includes plans by a Fort Smith-based developer for the property.

A spokeswoman for the chain who had confirmed the advent of the Benton Whataburger (for which we also don't yet have an opening date) would not certify this one, replying to our email query: "We don't have any news to share today, but I'll be sure to keep you posted." Whataburger has six currently operating restaurants in Arkansas — two in Fayetteville and one each in Magnolia, Rogers, Springdale and Texarkana — with outlets announced for Fort Smith and El Dorado.

Meanwhile, one of our loyal readers points out that describing these as Central Arkansas' "first" Whataburger outlets reminds us that, "while it may be true of the recent expansion efforts by the new Chicago-based corporate ownership," there used to be at least two locations in south and southwest Little Rock into the mid-'90s. That includes the one at 7610 Geyer Springs Road, which was robbed in February 1992 and in April and May 1994. The reader notes that location may have closed in 1994; it currently houses a Daylight Donuts. He also recalls visiting a location at South University Avenue and West 54th Street in the 1970s.

Dog Town Pizza is looking toward a Nov. 1 grand opening at 5500 MacArthur Drive, North Little Rock, the site of several restaurants and bars in recent years. "The renovation is complete. The inspections have all passed and WE ARE HIRING!," proclaims a Facebook post (facebook.com/profile.php?id=100085937086339). "Amboy is about to have its very own pizza spot." We don't yet have hours or an idea of the menu, but we have left a voicemail at the listed phone number, (501) 615-8989.

Jersey Mike's Subs opened an outlet last week at 3901 Warden Road, North Little Rock, on the lot of The Other Center, where its immediate neighbors include a McDonald's and the recently opened Chicken Salad Chick. Hours are 10 a.m.-9 p.m. daily. (501) 747-1444; jerseymikes.com.

And speaking of chains and North Little Rock, we're told a Crumbl Cookies outlet has a target to open this fall in Lakewood Village, off McCain Boulevard west of McCain Mall. We don't have any specific details as yet; it doesn't yet show up on the chain's website, crumblcookies.com. Little Rock's first outlet opened in August in the Pleasant Ridge Town Center, 11525 Cantrell Road; there are also outlets in Conway, Benton, Rogers and Bentonville.

Meanwhile, an outlet of 7Brew, a drive-thru coffee establishment whose public relations personnel hyperbolize it as "[a] concept revolutionizing the coffee industry through its speed, quality products, genuine connection and kindness," is under construction at 11921 Maumelle Blvd. at Crystal Hill Road, North Little Rock, near the Walmart and the site of a former car wash. We're awaiting details. You will recall we reported in August that a 7Brew is under construction at the site of the former Shorty Small's at 11100 N. Rodney Parham Road, Little Rock. Menu offerings will include coffee beverages, infused energy drinks, Italian sodas, smoothies and teas. These two will join locations in Conway, Russellville, Fayetteville, Rogers, Springdale, Lowell, Bentonville, Garfield and Siloam Springs. 7brew.com; facebook.com/7brewcoffee.

Saturday was the last day of business for Searcy's Main Street Cafe, 1511 W. Pleasure Ave., after 31 years in business, some of those on Searcy's Main Street. The owners posted on social media that the struggle to "keep up with economic changes," compounded by the covid-19 pandemic, contributed to the "tremendously difficult" decision to close. "Three generations of a family have owned and worked in this building," the Facebook post declares.

And Cypress Social, 1703 Cock of the Walk Lane, just off of Maumelle Boulevard on the North Little Rock side of Maumelle, hosts its first "Wine & Swine Social," 2-6 p.m. Oct. 9 on the restaurant's 10,000-square-foot property. What the restaurant hopes will become a fall event provides guests tasting opportunities for 50 global wines, "an elevated BBQ buffet and Raw Oyster Bar buffet and bites from their award-winning chefs," according to a news release. Guests receive a complimentary swag bag and tasting glass upon check-in; the event will also feature "signature cocktails, fun raffles and door prizes, outdoor courtyard games and limited merchandise." Comestible partners include Count Porkula and Le Pops; The Cons of Formant will be among the performers. Tickets are $80 early-bird, "while supplies last"; otherwise, $85, and of course you must be 21 or older. Call (501) 916-2670 or visit eventbrite.com/e/1st-annual-wine-swine-social-tickets-423535214227.

Dunbar Garden, 1720 S. Chester St., Little Rock, offers area brunchers the chance to choose which of the area's amateur biscuit bakers has the best biscuits and gravy, 11 a.m.-2 p.m. Oct. 16 at the annual Biscuit Brunch in the Garden. The bill of fare also includes eggs, breakfast potatoes, bacon, fruit, pastries, beer and mimosas. Admission is by a $25-donation virtual ticket in advance; otherwise, $35 and $10 for kids under 12. Visit dunbargarden.org.

Tuesday is National Cinnamon Roll Day, and the Atlanta-based Cinnaholic chain, which has a location at 12800 Chenal Parkway, Little Rock, is offering a buy one, get one free promotion. (Small type: Valid only in stores and one free roll per person.) (501) 916-2170; cinnaholiclittlerock.com.