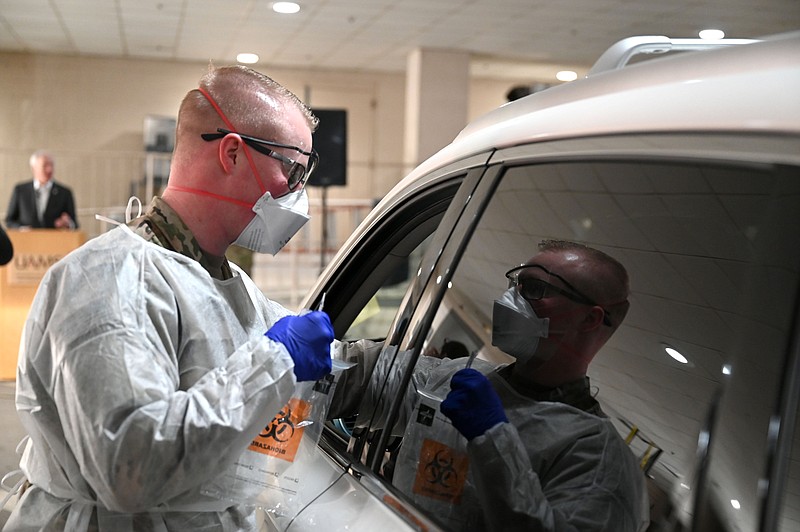 Thomas Cook, with the Arkansas Army National Guard, administers a test for COVID-19 at a drive-thru screening site at UAMS on Tuesday, Jan. 4, 2022. Gov. Asa Hutchinson visited the medical campus to welcome 12 Arkansas National Guard soldiers who are helping with the demand at the drive-thru screening site. (Arkansas Democrat-Gazette/Stephen Swofford)

Arkansas' coronavirus metrics continued to indicate a slowing spread of the virus Thursday as the number of people hospitalized with covid-19 in the state fell to its lowest level in three months.

State Epidemiologist Mike Cima said six of the deaths reported Thursday happened within the past month.

Of the others, he said, three were from July and eight were from earlier in August.

Dropping by double digits for the second day in a row, the number of covid-19 patients in the state's hospitals fell Thursday by 19, to 231, the smallest number since June 28.

The state's count of cases rose by 343 -- smaller by 156 than the increase on Wednesday and less than half the size of the rise the previous Thursday.

It was the smallest daily increase in cases on a Thursday since May 12.

In another sign of a slowdown in new infections, Cima said 8.8% of the state's coronavirus cases were positive over the week ending Wednesday, the first time in months the percentage over a seven-day span had been below 10%.

"It just seems that the trend is that transmission is slowing," Cima said.

"We're seeing less cases, less hospitalizations, diminishing positivity, so I think all those things taken to together just paint the picture that we're headed in the right direction right now."

The state has seen a rise in reported deaths, although many of the deaths that have recently been reported happened weeks ago.

Over the seven-day spans ending Wednesday and Thursday, the average number reported a day was about 15 -- the highest average since late March.

When deaths are examined by the death the date occurred, rather than when it was reported, it appears the number peaked in late July at an average of eight or nine a day, Cima said.

That number could change, however, as more deaths are reported.

"It may be that we are actually decreasing in the frequency of deaths, day to day, but we we won't really know that for a couple weeks because of the delay associated with reporting those," Cima said.

Declining for the 16th straight day, the average daily increase in the state's case count over a rolling seven-day period fell to 363, the first time it had been below 400 since the week ending June 3.

Already at its lowest level since June 7, the number of cases in the state that were considered active fell by 303, to 5,137, as recoveries outpaced new cases.

After rising the previous two days, the number of the state's virus patients who were in intensive care remained Thursday at 47.

Growing for the second day in a row, the number on ventilators rose by four, to 17.

At its hospitals in Little Rock and Springdale, Arkansas Children's had eight covid-19 patients on Thursday, the same number it had the previous Thursday, spokeswoman Amanda Leech said.

Reflecting declines in new cases and hospital admissions for covid-19, the number of Arkansas counties where the U.S. Centers for Disease Control and Prevention recommends that people wear masks in indoor public places fell from eight to two under a weekly update on Thursday to the agency's map of "covid-19 community levels."

The level fell from high, meaning masks are recommended, to medium in Cleburne, Jackson, White and Woodruff counties on Thursday and from high to low in Craighead and Hot Spring counties.

Arkansas and Monroe counties, which share a service area used by the CDC to calculate hospital metrics, were the only counties where the level remained high.

Admissions for covid-19 in the two eastern Arkansas counties the week ending Thursday translated to a rate of 37.2 per 100,000 residents -- above the threshold of 20 per 100,000 that causes a county's level to be high regardless of its number of new cases.

Among the state's most populous counties aside from Craighead, the level fell from medium to low in Pulaski, Sebastian, Faulkner and Saline counties and remained low in Benton and Washington Counties.