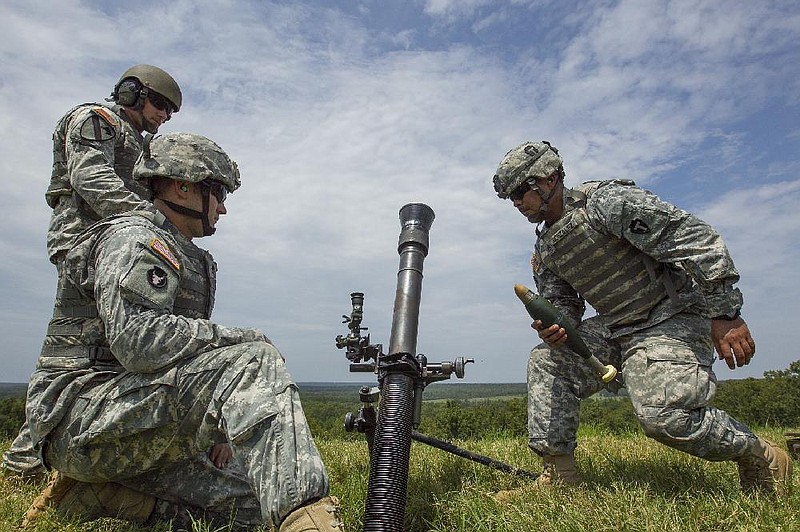 FILE — Justin Fisher, back left, from North Little Rock, Chris Zimbelman, front left, from Des Moines, IA, and Juan Gonzalez, from San Antonio, TX, fire an 81mm mortar round from a range at Camp Robinson during the only day of live fire exercises of a 4 week Mortarman training course in this Aug. 7, 2014 file photo. (Arkansas Democrat-Gazette — FILE)

Guardsmen training with machine guns at Camp Joseph T. Robinson on Friday morning ignited a fire that sent up a plume of smoke visible on both sides of the Arkansas River, although authorities said in a Facebook post Friday evening that it would burn out safely.

There was no threat of the blaze leaving the confines of the base in North Little Rock, the post stated.

"It will be smoky for a while until the fire burns itself out," according to the post.

It was not clear exactly when or how the fire started, but the post stated that it began at a gun range near the center of the camp.

A spokesperson for Camp Robinson had not returned a phone message as of Friday evening requesting further details about the cause and size of the fire.

North Little Rock firefighters had not been called to assist with the fire as of Friday evening, spokesman Capt. Dustin Free said.