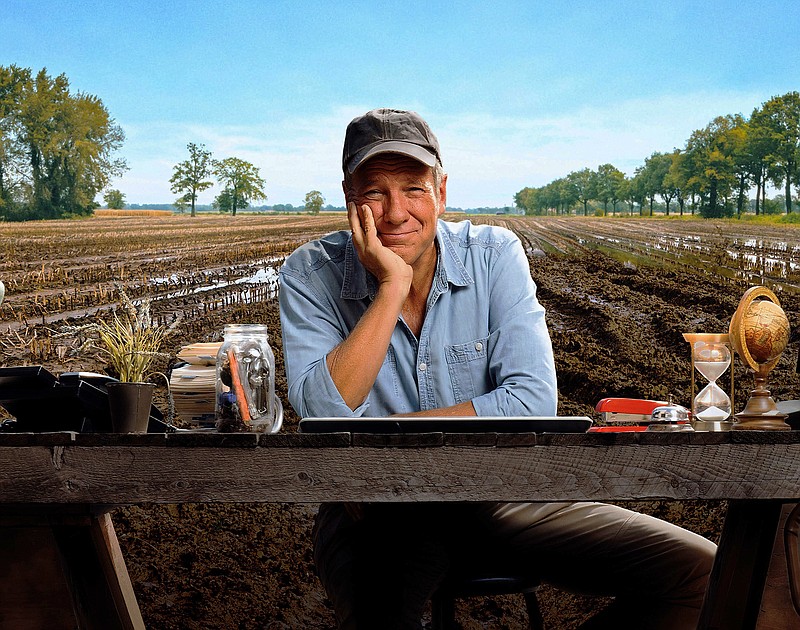 Mike Rowe is host of “Dirty Jobs,” a series airing every Sunday on Discovery and streaming on Discovery+. The man is not afraid of getting dirty. (Discovery Communications via AP)

NEW YORK — It may come as no surprise to fans of Mike Rowe that when he recently visited the Florida Panhandle, he didn't lay out on the beach or take a cruise.

He donned a 100-pound diving helmet, waded into a smelly, muddy creek and joined a work crew putting concrete jackets around wooden bridge pylons. Emerging from the muck after several hours, he told the crew: "Glad you do it. Don't know how you do it."

Rowe has been immersing himself like that in some of the toughest professions for years as host of "Dirty Jobs" every Sunday on Discovery and streaming on Discovery+. A new season started in December.

"What makes the show relevant, I think, is that it's a constant reminder to things we've become disconnected from as a country," Rowe says. "You can learn a lot from dirty jobs collectively."

The show shines a light on those hardworking Americans whose contributions are rarely acknowledged in industries such as construction, sanitation, manufacturing and more.

"If you share my addiction to smooth roads and affordable energy and well-maintained runways and indoor plumbing, then the show has a message for you," he says.

The new season sees Rowe stirring massive vats of hot sauce made from fearsome chile peppers in Fort Mill, S.C., and getting dirtier by the minute trying to empty ultrafine carbon dust bags in Berthoud, Colo.

He descends into an aging manhole in Tennessee to provide sewer maintenance and helps control the Texas feral cat population by sedating, shaving and neutering two dozen kitties.

"The intent with every segment is to make people who have nothing to do with that industry feel connected to it," Rowe says. "Think about the people who allow the lights to come on when you flip the switch."

There are some TV rules: No second takes, no preproduction, no casting and no writing. Just a behind-the-scenes camera that's always rolling, trying to capture a day in the life. He is inspired to visit dirty job sites by viewers who nominate candidates.

Rowe is eager to explode any stereotypes of what blue-collar and white-collar work is these days or what is a so-called good job. Many of the workers he gets dirty with are millionaires, though you wouldn't know it.

Part of the appeal of the show is the humor, both Rowe's self-depreciating style and that which naturally emerges from the workers, whether they're gently mocking Rowe or good-naturedly joshing with one another.

"All you have to do is get out of the way and let it come out because it always will," Rowe says. "There's always humor. Sometimes it's gallows, sometimes it's inappropriate, sometimes dad jokes. But whatever it is, that honestly became the most important component."

Rowe did some 300 "Dirty Jobs" shows after he sold the concept in 2003 and took a break in 2012, having shot in all 50 states half a dozen times. The network continued to air reruns for the next decade.

"When 'Dirty Jobs' was at its best, we were going to towns you couldn't find on maps to meet people you didn't know existed doing jobs you didn't know got done," he says.

Then the pandemic in 2020 put a focus on jobs like nursing, food delivery workers and store cashiers that suddenly became vital for Americans, reviving interest in new "Dirty Jobs" episodes.

Rowe started back up in July 2020 with a four-episode run of "Dirty Jobs: Rowe'd Trip," in which he tooled around the country in an RV, and the main show returned in January 2022.

"Essential work is suddenly back in the headlines," he says. "Something's happening with work in general and that was reason enough to kick the tires."

Rowe is alarmed by what he notes is an employment picture that shows 7 million able-bodied men between 25 and 54 who are not looking for work.

"That worries me. Because there are 11 million open jobs in the country. A lot of them look dirty, most of them are better than people think and almost none of them require a four-year degree."

In 2008, Rowe created the mikeroweWORKS Foundation to launch a national campaign for skilled labor and has a scholarship program to help people get trained for in-demand skilled jobs.

One sector Rowe is eager to highlight is environmental jobs, like visiting a biochar maker that turns scrap lumber into highly absorbent charcoal fertilizer.

There's money in green jobs, but he has an on-brand warning: "If you want to clean the planet, you better be willing to get dirty."