House Republicans get set to investigate 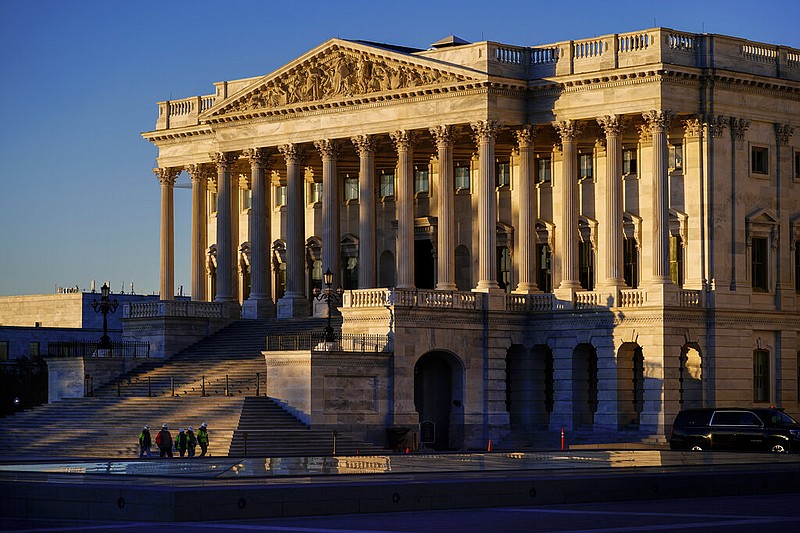 Light from the morning sun illuminates the House of Representatives side of Congress at the Capitol in Washington in this Dec. 3, 2021, file photo. (AP/J. Scott Applewhite)

WASHINGTON -- Newly empowered House Republicans are preparing a wide-ranging investigation into law enforcement and national security agencies, raising the prospect of politically charged fights with the Biden administration over access to sensitive information such as highly classified intelligence and the details of continuing criminal inquiries by the Justice Department.

The House plans to vote this week on a resolution to create a special Judiciary subcommittee on what it calls the "weaponization of the federal government," a topic that Republicans have signaled could include reviewing investigations into former President Donald Trump.

The panel would be overseen by Rep. Jim Jordan, R-Ohio, who is also poised to become the Judiciary Committee's chair. It remains to be seen who else Speaker Kevin McCarthy, who made numerous concessions to a far-right faction of his party to win the speakership, will put on it.

In a Fox News interview Friday evening, Rep. Chip Roy of Texas, a lead negotiator for hard-right lawmakers who pushed McCarthy's team for concessions, portrayed the panel as part of the agreement they struck for their support. He said McCarthy had committed to giving the subcommittee at least as much funding and staffing as the House special committee in the last Congress that investigated the Jan. 6, 2021, riot at the Capitol.

A spokesperson for Jordan did not reply to a request for comment, but both he and McCarthy have spoken for months about their desire for such an investigation and pledged to voters during the 2022 campaign to carry one out.

"We will hold the swamp accountable, from the withdrawal of Afghanistan, to the origins of covid and to the weaponization of the FBI," McCarthy said in his first remarks as speaker early Saturday. "Let me be very clear: We will use the power of the purse and the power of the subpoena to get the job done."

The text of the resolution establishing the subcommittee would give the panel essentially open-ended jurisdiction to scrutinize any issue related to civil liberties or to examine how any agency of the federal government has collected, analyzed and used information about Americans -- including "ongoing criminal investigations."

Republicans are promoting Jordan's panel as a new "Church Committee," referring to a 1970s investigation by Sen. Frank Church, D-Idaho, that uncovered decades of intelligence and civil liberties abuses by presidents of both parties.

But in an environment in which Trump has been the subject of multiple criminal investigations for years -- including continuing inquiries into his attempts to overturn the 2020 election results and his hoarding of sensitive documents -- Democrats predicted the new investigative subcommittee was likely to adopt a more partisan edge.

Rep. Jerrold Nadler of New York, the top Democrat on the Judiciary Committee, said the Church Committee had been "a serious and bipartisan attempt to reform the conduct of the intelligence community, based on hard and verifiable evidence."

By contrast, he said that "this new thing, fueled by conspiracy theories and slated to be run by the most extreme members of the MAGA caucus," was likely to be more similar to the notorious House Un-American Activities Committee of the mid-20th century.

Jordan is a staunch ally of Trump. Late last year, as the top Republican on the Judiciary Committee when his party was still in the minority, he oversaw a 1,000-page staff report that claimed that the FBI had "spied on President Trump's campaign and ridiculed conservative Americans" and that the "rot within the FBI festers in and proceeds from Washington."

The resolution appears to give him authority to subpoena the Justice Department for information about the special counsel inquiry into Trump's attempts to overturn the 2020 election and his handling of classified documents, along with other politically charged matters such as an open tax investigation into President Joe Biden's son, Hunter Biden.

The text of the resolution would also grant Jordan's panel the power to receive the same highly classified information that intelligence agencies make available to their oversight committee, the House Permanent Select Committee on Intelligence.

Intelligence Committee members have access to some of the most sensitive secrets in the government, including information about covert actions, which are not shared with other lawmakers. Traditionally, House leaders tend to place on the intelligence panel members of their party they think are especially trustworthy not to disclose classified information.

While Jordan's investigative unit will be housed within the Judiciary Committee, its 13 members -- eight of whom would be Republicans -- will not be limited to lawmakers on that committee.

It is not clear, for example, whether Republican leaders would select hard-right members, such as Rep. Marjorie Taylor Greene, R-Ga., who was stripped of her committee assignments in 2021 for making a series of violent and conspiratorial social media posts before she was elected. McCarthy has already promised her a spot on the House Oversight Committee, and she broke with other far-right members to support his speakership bid from the first ballot, as did Jordan.

Such a situation could result in lawmakers trying to scrutinize a Justice Department investigation as that inquiry potentially examines some of those same lawmakers' conduct concerning the events of Jan. 6.

In an interview on ABC's "This Week" on Sunday, Rep. Scott Perry, R-Pa., rejected a suggestion that he should pledge not to serve on Jordan's subcommittee because it may scrutinize the Jan. 6 investigation and as a witness in that inquiry, he had a conflict of interest. Perry, who played an important role in Trump's attempt to overturn the results of the 2020 election, had his cellphone seized by the FBI.

"Why should I be limited -- why should anybody be limited just because someone has made an accusation?" Perry said, adding: "I get accused of all kinds of things every single day, as does every member that serves in the public eye. But that doesn't stop you from doing your job. It is our duty, and it is my duty."

After an epic 15-ballot election to become House speaker, Republican Kevin McCarthy faces his next big test in governing a fractious, slim majority: passing a rules package to govern the House.

The drafting and approval of a set of rules is normally a fairly routine legislative affair, but in these times, it's the next showdown for the embattled McCarthy.

To become speaker and win over skeptics, McCarthy had to make concessions to a small group of hard-liners who refused to support his ascension until he yielded to their demands.

Now those promises -- or at least some of them -- are being put into writing to be voted on when lawmakers return this week for their first votes as the majority party.

On Sunday, at least two moderate Republicans expressed their reservations about supporting the rules package, citing what they described as secret deals and the disproportionate power potentially being handed out to a group of 20 conservatives.

The concessions included limits on McCarthy's power, such as by allowing a single lawmaker to initiate a vote to remove him as speaker and curtailing government spending, which could include defense cuts. They also give the conservative Freedom Caucus more seats on the committee that decides which legislation reaches the House floor.

They also raise questions about whether McCarthy can garner enough support from Republicans, who hold a 222-212 edge, on a critical vote in the coming months to raise the debt limit, given conservatives' demand that there first be significant spending cuts, over opposition from the White House and a Democratic-controlled Senate.

Rep. Nancy Mace, R-S.C., a strong McCarthy supporter, said she currently is "on the fence" about the proposed rules.

"I like the rules package," Mace said, in reference to what has been released publicly. "What I don't support is a small number of people trying to get a deal done or deals done for themselves in private, in secret."

She said it will be hard to get anything done in the House if a small band is given a stronger hand compared with the larger number of moderates. "I am concerned that commonsense legislation will not get through to get a vote on the floor," she said.

Rep. Tony Gonzales, R-Texas, said he was an outright "no" against the rules package, decrying an "insurgency caucus" that he said would cut defense spending and push extremist legislation, such as on immigration.

Democrats are expected to be united against the package.

Jordan, a member of the Freedom Caucus who is expected to lead the House Judiciary Committee, defended the concessions McCarthy made and said he believes the rules package will get enough Republican support to pass. He insisted that the agreements will help ensure broader representation on committees and will curtail unfettered government spending.

In the coming months, Congress will have to work to raise the debt limit before the government reaches its borrowing cap or face a devastating default on payments, including those for Social Security, military troops and federal benefits such as food assistance. Lawmakers will also have to fund federal agencies and programs for the next budget year, which begins Oct. 1.

"Our general concern is that the dysfunction -- that was historic -- that we saw this week is not at an end, it's just the beginning," said House Democratic leader Hakeem Jeffries of New York.

The White House has rejected Republican calls to slash spending in return for an increase in the federal government's borrowing authority. White House press secretary Karine Jean-Pierre went so far on Sunday as to call House Republicans' likely demands "hostage taking" that would risk default, an event that could trigger an economic crisis.

Jordan argued that "everything has to be on the table" when it comes to spending cuts, including in defense, in light of the government's $32 trillion debt. "Frankly we better look at the money we send to Ukraine as well and say, how can we best spend the money to protect America?" he said.

Roy said he and other conservatives will be holding their position that there should be spending cuts in a debt ceiling bill. Asked whether he would exercise members' new authority and unilaterally initiate a vote to remove the speaker if McCarthy doesn't ultimately agree, Roy offered a warning.

Mace and Gonzales appeared on CBS' "Face the Nation," Jordan spoke on "Fox News Sunday," Jeffries was on NBC's "Meet the Press," and Roy was on CNN's "State of the Union."

Information for this article was contributed by Charlie Savage and Luke Broadwater of The New York Times and by Hope Yen, Lisa Mascaro and Josh Boak of The Associated Press.